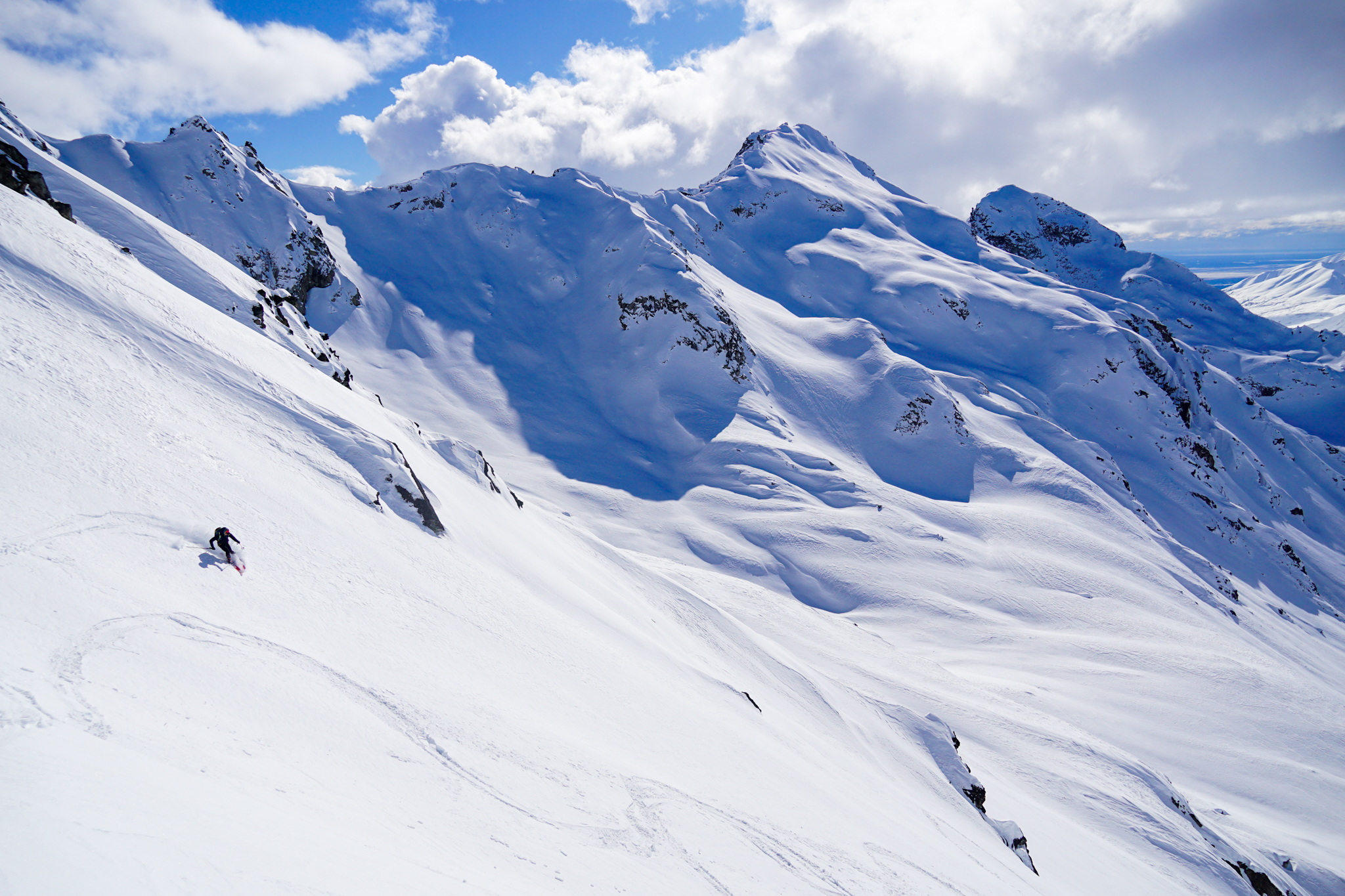 Brant was one of my first touring partners, skiing together near Spokane. When he moved to Revelstoke, Logan and I visited him to ski there. At the end of 2019, he moved to Anchorage. I made plans to visit in 2020, but unfortunately the Covid pandemic ruffled those plans for a few years. But better late than never!

On the day Sam and I arrived in Anchorage, a warm, wet storm impacted the local mountains. It even rained at Turnagain Pass! A D4 avalanche went off naturally in the Front Range, taking out some homes in Eagle River. So Brant and a few of his friends convinced us to take the skis for a long scenic walk at Hatcher Pass, where it had not snowed in many weeks but at least was reasonably stable. I was just excited for some sun and to get to see a new place.

Hatcher Pass is about an hour north of Anchorage in the Talkeetna Mountains. The snowpack here is much thinner and more continental. Brant’s friends Alex and Zach had been wanting to do the classic “Bomber Traverse” which is actually a loop that passes a few backcountry huts. People often do it in multiple days but it is a reasonable day trip.

We parked at the Mint Valley parking lot, which is the start of the loop. The rest of the road to the higher parking lots were actually closed due to a large avalanche that swept across the road a month prior, but that did not affect us.

The tour begins with a 7 mile skin up the Mint Valley. I had brought my heaviest touring gear because I had been told that we would be skiing lines right above the highway, but somehow we ended up on a long flat scenic traverse instead. It was a struggle to keep up with the rest of the guys on this gear.

The Talkeetnas are relatively rocky and dry compared to the more coastal mountains of Turnagain. The complete lack of trees in a valley felt so foreign to me (except for possibly the Napeequa). It offered simple travel and nice views.

At the head of the valley, we began a long climb to the Backdoor Gap. We finally entered the sun the views began to expand in all directions. The peaks here may be only 5,000 to 7,000 ft, but they look huge! Alaska has that effect with such a low treeline. The terrain looks average on a map, but is mind blowing to experience in person. Call it the “Alaska Factor”.

The avalanche forecasters in the area had been lamenting the lack of good snow at Hatcher. Supposedly, crusts were omnipotent and sledders had hammered the snow. But as we gazed out onto the north facing glacier on the other side of the Backdoor Gap, we saw perfectly untracked snow. Perhaps there was hope!

The snow on the backside turned out to be fun settled powder, mostly having escaped the vices of wind and sun for many weeks. In Washington, it is nearly impossible to ski decent powder after weeks of dry weather, but not in Alaska! We flew down the low angle glacier, arcing giant turns. It reminded me of the Overcoat Glacier back home, but so much easier to get to.

We cruised down the valley, with more peaks expanding at every corner. I love gliding on skis through scenic places like this, gazing off at the skyline. And here, the mountains seemed to go on forever, with awesome peaks in every direction.

Eventually, we transitioned and began climbing towards Bomber Pass. The glacier is called the Bomber Glacier because there is a plane wreckage sticking out somewhere, but we never saw it.

A cold wind lightly swept pass us as we gradually climbed to Bomber Gap. In direct sun, it felt spring-like in Alaska, but in low or indirect light, we were reminded that winter had not given up completely. The combination of cold air, long days, sun, and stable snow is what makes the late March to early April window so special in Alaska.

At Bomber Pass, we reentered the direct sun and gazed out to the southern edge of the Talkeetnas and the flats of the Matanuska Valley. Convective clouds floated above the peaks, casting shifting shadows across the landscape. It was so incredibly beautiful and peaceful.

We got one steeper pitch of skiing down towards the Reed Lakes in the sunshine. The snow was an acceptable corny consistency, but the setting more than made up for it. Giant, alpine slopes and snowy peaks all around: this is Alaska.

After the initial steeper pitch, we had to go into full elevation conservation mode. The long descent to the car covers many miles with a lot of flat sections. There was much skating and side stepping, especially across the snowmobile flats closer to the road.

On a day when most spots were too dangerous or simply void of good snow, the Bomber Traverse was the perfect move. The skiing greatly exceeded our expectations, but the highlight was definitely just seeing a new beautiful place. One can look at pictures of mountains in Alaska, but experiencing them is the only true way to understand their power, stature, and vastness. The trip was off to a great start!