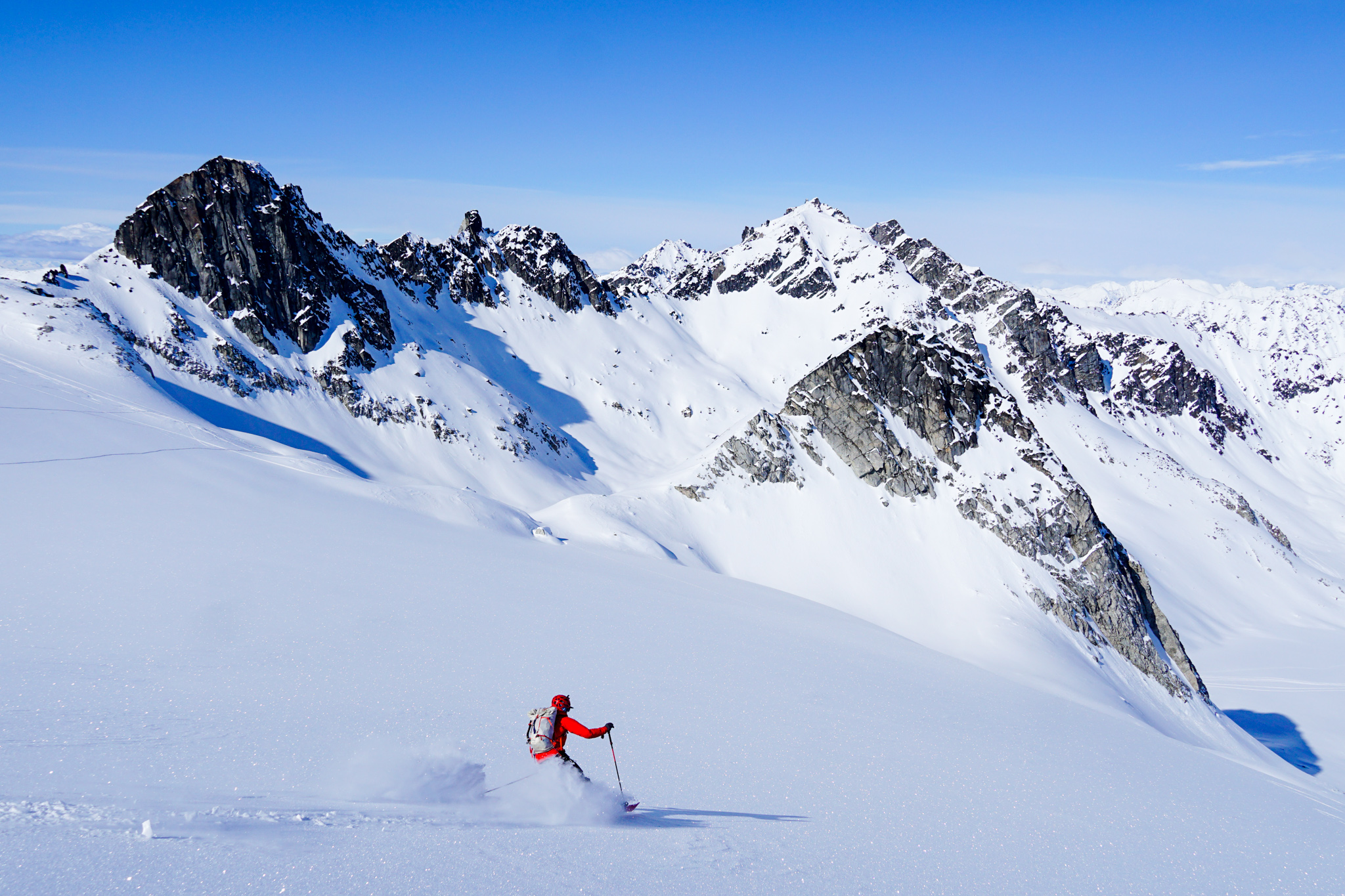 Brant, Sam, and I had an excellent first weekend in Anchorage, doing the Bomber Traverse and then lapping some decent, low angle powder on a stormy day near Turnagain Pass. Turnagain continued to be warm and stormy, so Brant and I planned a midweek escape to sunny Hatcher Pass once again. Brant’s friends Zach and Sarah were planning on staying at the famous Snowbird Hut for a few nights, so we would head out there and meet them for a day.

The road was still closed at the Mint Valley Parking, adding about two miles of skinning to start the day. After an initial steeper pitch, we were cruising in the sun towards Glacier Pass.

We told Zach and Sara we would meet them at Glacier Pass at 11 am, and we arrived at 10:55. Zach was enthusiastic about the snow quality on the other side! We skinned from the pass towards Higher Spire. Despite a dry forecast, it seemed that it had miraculously snowed a few inches of light powder since the weekend! This was going to be good.

We enjoyed a wonderful low angle run back down to the Snowbird Hut. The snow sparkled so intensely that it was almost blinding!

The Snowbird Hut is one of many first-come-first-serve huts in the Talkeetnas. Snowbird is definitely the most accessible and famous and thus gets pretty crowded. Even midweek, it was full overnight and some people had to sleep outside.

Like much of Alaska, the terrain around the Snowbird Hut does not look that impressive on a map, but in person it is stunning! The Hut is surrounded by long moderate glaciers and even some steeper couloirs. There are many days of skiing in the surrounding area and even with many skiers and sledders, there was plenty of fresh snow to be found.

We took a lunch break at the hut and then moved over to a moderately steep bowl nearby. Zach played around with his drone while we took turns skiing.

For such a dry range, the Snowbird Glacier is pretty large. Ice used to fully surround “the Nunataq”, a term for a rock island surrounded by ice, but the glacier has receded greatly. Still, it is a beautiful feature.

When a skier thinks of Alaska, they usually think of big mountain free riding, with steeps spines and cliffs. But as I was discovering, Alaska is equally all about big, open glaciers and mellow slopes. As fun as it is to hop down a steep line, my favorite type of skiing is big open slopes where I can approach the terminal velocity of my body, feel the wind blowing through my hair, and scream at the top of my lungs.

From the top of the Snowbird Glacier, we ripped a beautiful thousand foot run to the bottom of the glacier. So much fun!

At the bottom, we said goodbye to Sarah as she headed back to the hut. Zach came up one more time with us.

At the ridge line, we said goodbye to Zach, as he headed back down towards the hut. Brant and I had our eyes on a creative exit – instead of exiting Glacier Pass, we were going to find our way to the summit of Didilkama and then ski off to the west.

It took a little of exploring, but Brant and I found a weakness in the south facing cliffs that let us access the upper slopes of Didilkama. Clouds began to float in just as we approached the summit.

After such a perfect day, it was disappointing to be in a cloud on our final summit. But we patiently waited and after about fifteen minutes, the clouds began to break. First, partially, then completely. A strip-tease from the incredible, endless Alaskan beauties.

Everyone says it and it is true: the mountains are just different in Alaska. They are vast, steep, rugged, alpine. There is something intangible that you cannot understand without experiencing them. Like the guidebook says, maybe it is The Alaska Factor. Whatever it is, it is mesmerizing, and I am so grateful for days like these where everything works out in such a spectacular place.

When we felt ready, we dropped off onto the steep west face in the glimmering evening light. Sunlight sparkled in snowflakes suspended in the air. We dropped in and all in a matter of seconds, windboard turned to corn to powder to corn-pow. We spend hours going up for a just few seconds of exhilaration on the way down. But it is each step and drop of sweat on the way up that makes the experience so special.

From the bottom of the bowl, we continued out the valley, holding elevation and returning to the land of infinite sled tracks. And with a minimal amount of skating, we made it back to the car easily.

During the Bomber Traverse, it felt like we were a tourist in a new place. But on this day, it felt like we were creators in a familiar place. I love dreaming and scheming, getting off the beaten path, and seeing these visions to reality. The “Snowbird Super Tour” worked out exactly as I dreamed with moderate glacier skiing, beautiful scenery, and a final epic summit and descent. Same artist, but new canvas. These are the days we live for!