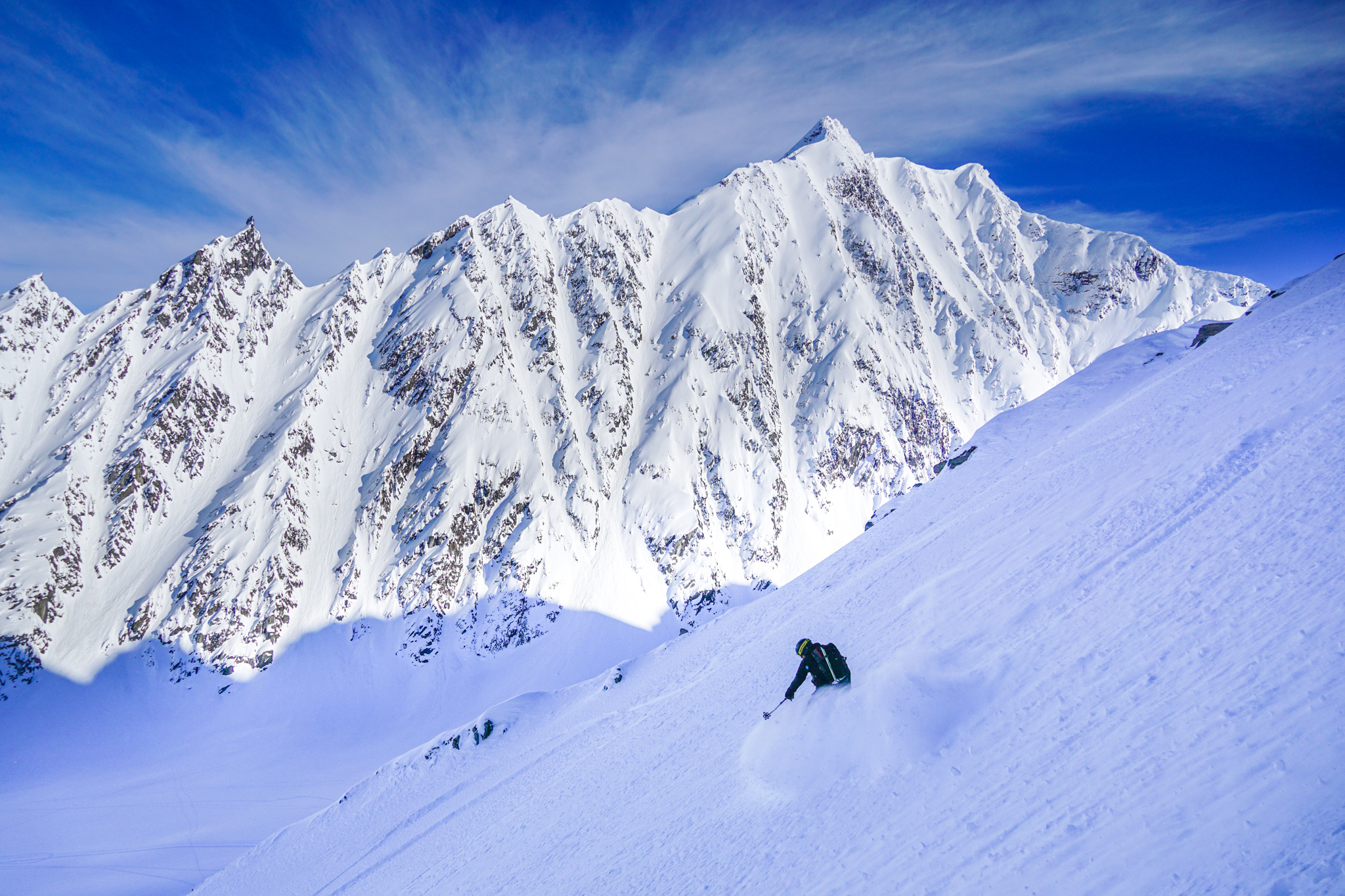 For our final weekend skiing in Alaska, Brant and I decided to roll the dice and head out to Thompson Pass near Valdez. Valdez is world renowned for steep big mountain skiing. I had been told that it was “the real deal”. Well, it was a five hour drive away and the forecast looked cloudy, so I decided to go in with a tourist’s attitude: see what you get to see, and ski what you get to ski.

We left early Friday morning from Anchorage and enjoyed the absolutely beautiful drive to Glenallen and then back into the Chugach and Thompson Pass. If you get the opportunity to do this drive on a clear day, I 100% recommended it, regardless if you are an outdoorsy person. It is that beautiful.

We were pleasantly surprised to arrive near the pass around noon to clearing skies. We decided to head up to the Stairway Chutes, a zone just west of Diamond Peak which Brant was familiar with.

About 20 minutes of skinning brought us above treeline and another hour into the incredible basin beneath Diamond Peak. There is a small glacier set in the cirque with dozens of chutes on either side. The density of the ski lines here is nearly incomprehensible!

We played around on the west side of the valley, skiing the east facing chutes. After warming up on the first chute, which already had a booter in, we moved further long for a longer untracked couloir.

From the top, we got our first panoramic views of the terrain around Thompson Pass. Compared to Hatcher, the terrain is so much more filled in and skier friendly. Warm coastal snow gets plastered to every alpine face, then dries out under clear weather. What you get is a steep skier’s dream: stable, big lines that can be ridden in nearly every way imaginable.

The snow in the chutes had sections that were really good, but was mostly variable and just okay. Still, we were not complaining.

We added one more half lap in a shorter chute, sharing the slopes with some nice Czech boarders. We also met skiers from France. This place definitely has worldly fame, yet does not feel in the least bit crowded.

We zipped down beautiful boot top pow in mini golf terrain back to the car, before driving over Thompson Pass and into Valdez in the dazzling evening sunshine. Valdez might be the most beautiful setting of a town I have ever seen: a small port surrounded by sea and steep snowy peaks on all sides. When you think of a coastal Alaskan mountain town, Valdez is the mirror image. Simply magnificient.

We eventually settled into dinner at The Fat Mermaid before getting some sleep in our hotel room. Already, my expectations of conditions had been far exceeded. We slept well, ready for a big day the next day.