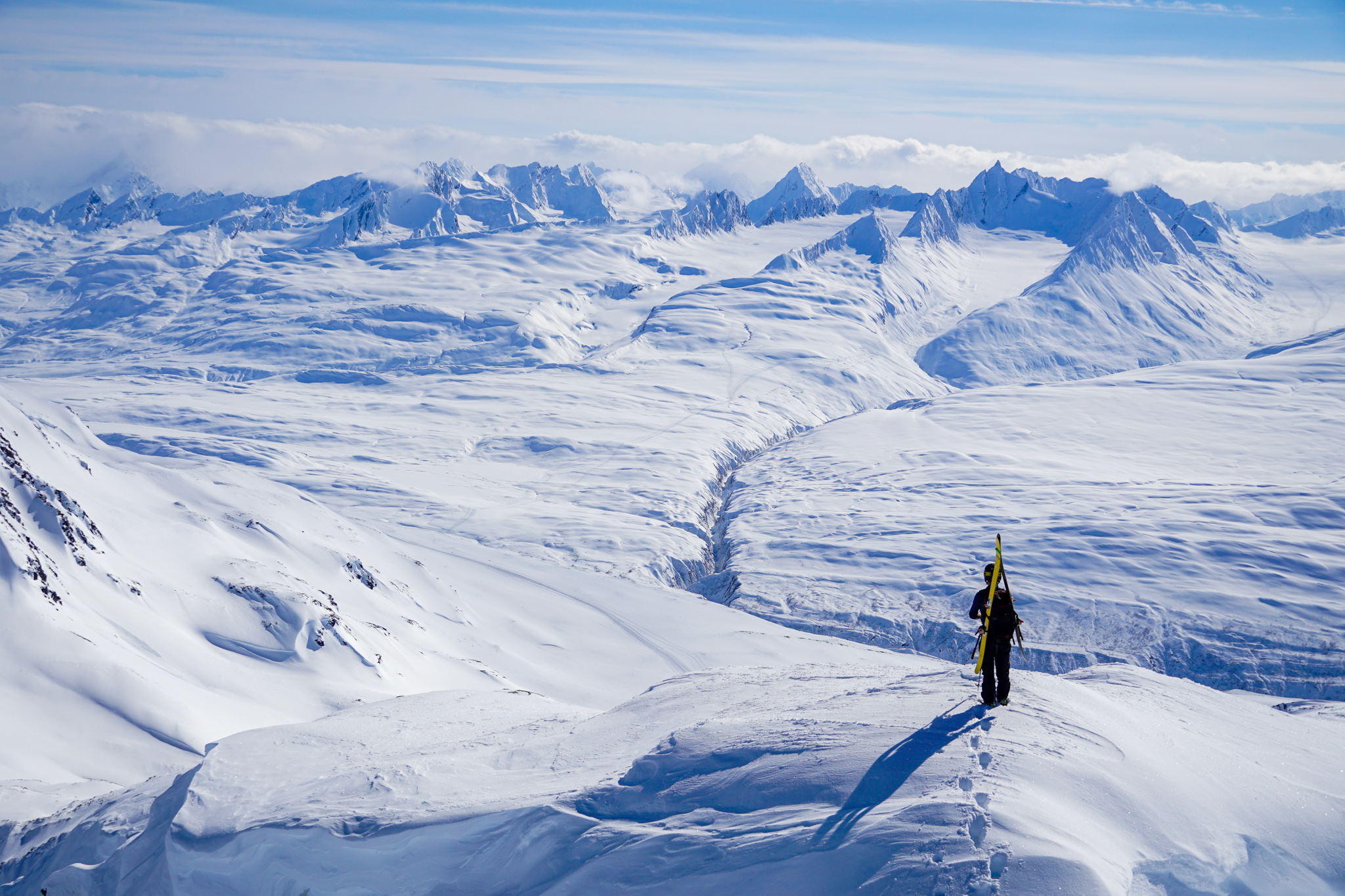 After getting our feet wet the day before in the Stairway Chutes, Brant and I prepared for a full day of touring at Thompson Pass. It seemed that we had mostly decent snow on east, west, and north aspects that had avoided direct sunlight. Stability seemed generally good with just some isolated wind pockets. If the “mostly cloudy” forecast turned out once again to be overly pessimistic, we might have the green light. So we optimistically planned an aggressive linkup of the Berlin Wall, Python Peak, and Cracked Ice.

There were a lot unknowns on this tour – could the Berlin Wall even be skied? Can you get into Cherry Couloir from Python Peak after climbing the west side? But from our observations, it seemed like just about anything was possible at Thompson Pass. This is the place where couloirs connect, and every line goes.

From the road, we confirmed that the Berlin Wall was skiable at least in a few lines. So we started following the massive sled highway up the valley towards the wall. This was the weekend of Tailgate Alaska, so hundreds of sledders descended upon Thompson Pass. Generally, they just stick to these well established “sled highways” so they’re not a nuisance to skiers.

Once we got the base of the wall, we booted directly up one of the lines we could ski. There were a few moments where the slope felt loaded, but otherwise, it felt good. Clouds swirled around us and we hoped that the forecast would be wrong once again.

We arrived at the top of the wall in dazzling sunshine above the clouds! There was also a solo boarder / sledder named Ryan who had come up the backside. We helped him pick a line of descent on the spicier part of the face that featured a blind roll near the bottom and straight-line exit.

We watched Ryan sweep the entire steep line smoothly at speed with a few big turns. In contrast, Brant and I cautiously jump turned and picked our way down. Usually Brant and I consider ourself decent riders but here at Thompson, we were certainly out of our class!

We had originally planned to climb the northwest slopes of Python, but had spotted a gully splitting the southwest face that would give us more direct access. So we skinned over and started up.

We donned crampons and an ice ax for the steep climb up Python. As we got higher, more and more peaks appeared behind us. The setting was absolutely absurd – just snow, rock, glaciers, and mountains as far as the eye could see. To be honest, it felt like we were in a movie. That is probably because so many ski movies are filmed here. Thompson Pass is undeniably in the echelon of the world’s greatest ski mountaineering venues. I felt intensely grateful to be here, in such great conditions, getting to experience what skiers from all the around the world come for.

The terrain to the south of the pass is a stone’s throw away, but guarded by deep chasms and long glaciers. Sled highways track into the snowy horizon, passing beneath the most rugged cliffs and spines. I could imagine these remote peaks and icecaps stretching all the way to the ocean. This region feels compelling and inspiring. With more time, it would be wonderful to explore.

From the summit, we easily found our way into Cherry Couloir, which descends slightly right from the true summit. This couloir is impressively sustained for over one thousand feet! Like the Stairway Chutes, the snow was mostly variable but the middle section had bona fide powder.

At the bottom, we discussed our options. From Python we had noticed a nice untracked bowl between Python and Rhinestone Cowgirl. So we decided to skin up there to the saddle between the two peaks. This provided a delightful low angle run back down the glacier.

Now it was time to grind up our final two thousand foot climb of the day to the top of Cracked Ice. The existing skin track went straight up the glacier, so I set a fresh one that gradually snaked its way to the top, snapping pictures along the way. Cracked Ice is a classic Thompson tour, unique for its extended moderate slope angle: over four thousand feet of moderate north-facing goodness back to the road.

It was late in the afternoon as we topped out. The crowds from earlier in the day had departed and we stood alone atop the ridge. In un-Alaskan fashion, the wind had completely stopped. I could not believe our luck – everything had gone so perfectly. I considered it a win just to get to see the terrain around here, let alone have good snow and stability. I have just gotten so used to getting skunked by bad timing that I have almost lost my ambition to plan trips at all. Low expectations has been the theme lately. This time, expectations were greatly exceeded. All the skunks made this moment even sweeter. Thank you, Alaska.

Despite being a classic, Cracked Ice still held vast swaths of untracked boot-top powder. So we let loose, flying at speeds I’ve rarely hit in the backcountry, and yelling all the way down to the Richardson Highway almost five thousand feet below us. After jump turning our way through steeps, this felt absolutely perfect. This was exactly what I wanted. Alaskan Perfection.

The snow stayed incredibly good all the way to the highway, for an incredible 4800 ft descent, quite possibly the most fun run of my life. We still had a smile on our face as we flagged down our French friends from the day before for a ride a few miles up to the road back to our car.

It is rare to get to visit a new place for such a short period and get to execute to your fullest potential, but that is exactly what Brant and I got to do on this day. Ski mountaineering is about being patient, maintaining hope, observing, and saving stoke for when the stars actually align. When the mountains open their arms and invite you to play, you have to be ready. On this day, everything lined up and we were able to string together multiple awesome summits and ski lines. This definitely goes down as one of my favorite ski days all time, anywhere.

To outsiders it may seem like it's been business as usual for me, but I've actually struggled a lot this season to balance responsibilities, chase the weird weather windows, and keep a positive attitude. It's been a busy period in my life, with a death in the family, career stuff, trying to be a good partner. There's a lot more to life than skiing and those things have demanded most of my attention and emotional energy.
Hello, this is Kyle and Kelly, and we'll be your aerobics instructors today.
🔥 in the sky.
At the feet of giants.
My best Ansel Adams impression, although I couldn't get myself to greyscale out that beautiful lavender in the sky and water. We got here after skinning and hiking hard in the dark for nearly four hours. Moments like this last seconds, and I feel lucky to have been there at the right time.
Finished a little write up about my trip to the Sierra! It was a challenging trip that had its ups and downs but turned out to be very rewarding and cool. The Sierra is a special place to me so it was sweet to return and get to experience it in a new way.