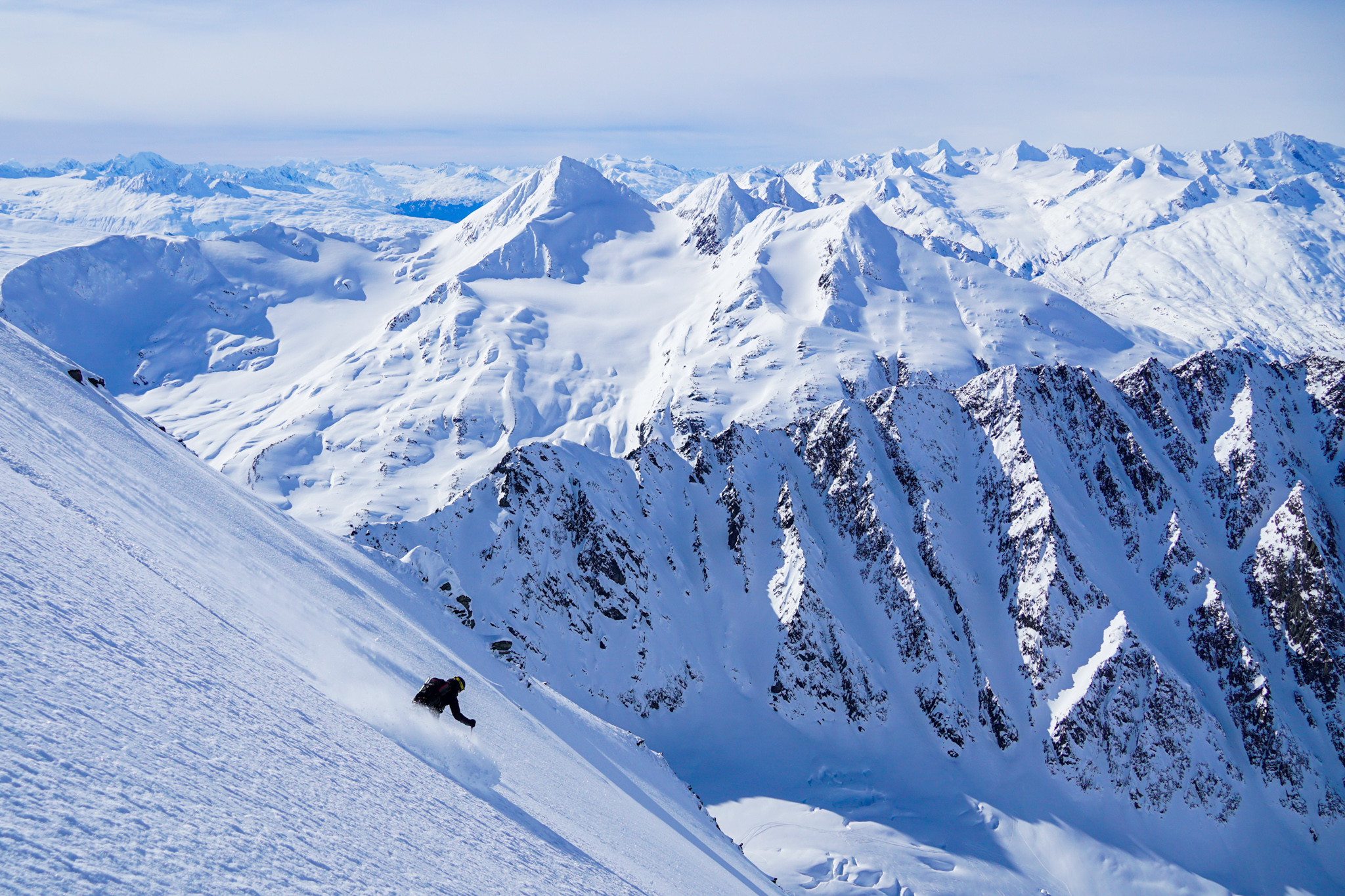 A Diamond in the Sky

For our final part day in Valdez, Brant and I decided to explore Mt. Diamond, an iconic peak that towers nearly six thousand feet above the Richardson Highway.

We began just as we had on Friday, approaching the zone for the Stairway Chutes. Then we continued up the glacier to the head of the valley beneath the intimidating west face of Mt. Diamond. We talked to some locals who informed us that the west facing chutes were called “The Gunbarrels”.

The Gunbarrels were guarded by a small bergschrund at the bottom, which looked easy to cross, and some formidable cornices up top. Although it was a cold, calm day and cornice failure seemed unlikely, the ruins of a cornice fall at the base of the runs reminded us about the overhead hazard. Since we were not 100% sure about the conditions, we decided to pass on these exposed lines and looked for an alternative.

To our left, tucked away, there was a south facing couloir that led to the ridge. We hypothesized that it would give us access to the north bowl of Diamond, which our French friends raved about. So we decided to head up that way.

This was likely our final climb of the trip, and it turned out to be our hardest. Each step, we broke through a sun crust to deep unsupportable sugary snow. It was slow trailbreaking, and our muscles were tired after a huge day the day before. We took frequent breaks to watch our neighbors shred their line in the Stairway Chutes.

At the top of the couloir, we turned the corner onto a northwest facing snow slope and the snow suddenly turned to legit blower powder. Not that recycled, slightly funky pow we had skied most of the trip, but true blower pow. Somehow, on one of the highest peaks in the region, the snow was the most unaffected by sun and wind.

We booted up a snowy shoulder around 6700 ft and took a long lunch break to admire the view. At 6700 ft, this was the highest point of our entire trip. People from the Rockies would laugh at us, but these mountains feel bigger than any of Colorado’s hills.

We decided that the final slope we booted up was too good to pass on, so we took a short lap. It was quite possibly the best turns of the trip, even though it was just a few turns. Our position towered over the Stairway Chutes, Cracked Ice, Python Peak and really all the terrain we had skied so far.

After the short run, we booted back up to the ridge and dropped into the large north facing bowl of Diamond. It was a bit tracked out in the choke, but once we got to more mellow slopes, we once again found excellent preserved pow and mini golf terrain all the way back to the car!

We felt completely satisfied as we packed up the car and began the beautiful drive back to Anchorage.