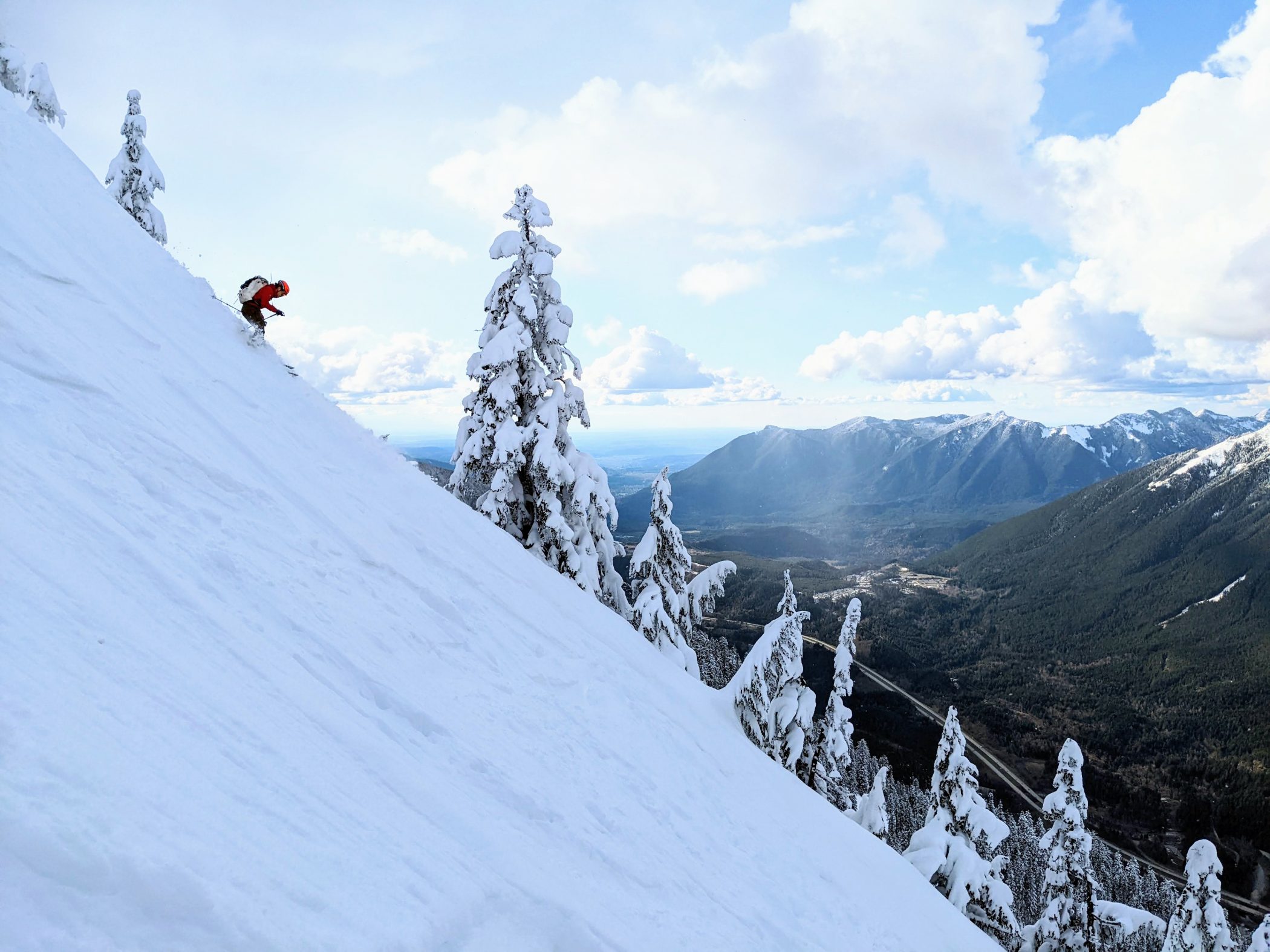 Boys in the Butte

The North Couloir of McClellan Butte is one of those classic lines that beckons above I90 as you drive to and from Snoqualmie Pass. I had driven by it dozens and dozens of times, but never skied it. It requires good, stable snow at a pretty low elevation and far west. Conditions are rarely proper for it. But this April we have experienced record breaking cold, dumping tons of fresh snow on the local mountains and even in the lowlands! Unfortunately, I missed out on the powder window because I returned from Alaska with COVID and had to quarantine for a while. But Friday was my first day as a free man once again and I saw that Nick and many of my other friends had just done McClellan and reported easy access and great skiing conditions. So Friday night it was!

I had always assumed you would approach from exit 42 like the summer trail, but the more efficient approach is actually exit 38 and to drive up FS 9020. We stopped at the turnoff for FS 9021, where the road get really snowy and gnarly. From there, we skinned a mile of road up FS 9021 and then 9021-110. After about a mile, you can duck into the woods and then immediately pop out at the base of an open slope beneath the north bowl of McClellan.

The North Couloir is actually northeast facing, so we followed the skintrack that traverses SE along the base of the open terrain until right beneath the actual line. Coverage was marginal in places, and one splitboarder appeared to get real sendy with the minimally covered pillows!

Our delusions of blower powder evaporated as we felt the snow surface. The sun had come out finally on this Friday and even northern aspects were not spared by the strong April sun. Oh well, this was mostly about skiing an iconic line so we can tell others we have skied it as you drive along I90.

The suncrust at least began to disappear as we transitioned from steep skinning to booting around 3700 ft. There was a party of three ahead of us resetting the booter, as each party who skis it covers up the booter. Two nights ago, Nick encountered waist deep wallowing, but we had pretty settled, skied out snow for easy booting.

The couloir itself is not too steep, probably around 40 degrees mostly. But it is longer than the Slot or most other Snoqualmie couloirs, which is cool. The best part is simply looking down to I90, North Bend and all the cars zooming by.

We caught up to the group of three and I realized it was my friend Robert, John’s friend Anson, and David! It made sense, because only people who follow Nick on Strava would have the beta.

Even the sun had spoiled our chances at blower pow, the passing convective clouds, snow squalls, and shifting shadows made for a beautiful evening. It reminded me of skiing Humpback last April, another great after work quick-hitter.

The line tops out around 5000 ft, just beneath the summit block. As we transitioned, light snowflakes began to fall out of the sky. The contrast between winter and spring below was beautiful.

We let Robert, David, and Anson descend first. This was all part of our strategy, because so many people had skied this line in the last 48 hours that it looked like a resort, all chunky monkey. It was definitely what resorts call “packed powder” and we all struggled in lightweight backcountry gear. Our quads burned like crazy. The best turns were legitimately the choke because resort-like moguls had appeared here. Then we finished it off with some breakable crust down low and a luge track back to the car! Classic Snoqualminix evening adventure!

The North Couloir of McClellan Butte is an undoubtedly classic local line. It was a fun romp to tick the list off, although it would be fun to ski it again someday in better conditions. It felt surprisingly simple to access and makes for a great after-work adventure or half day out.