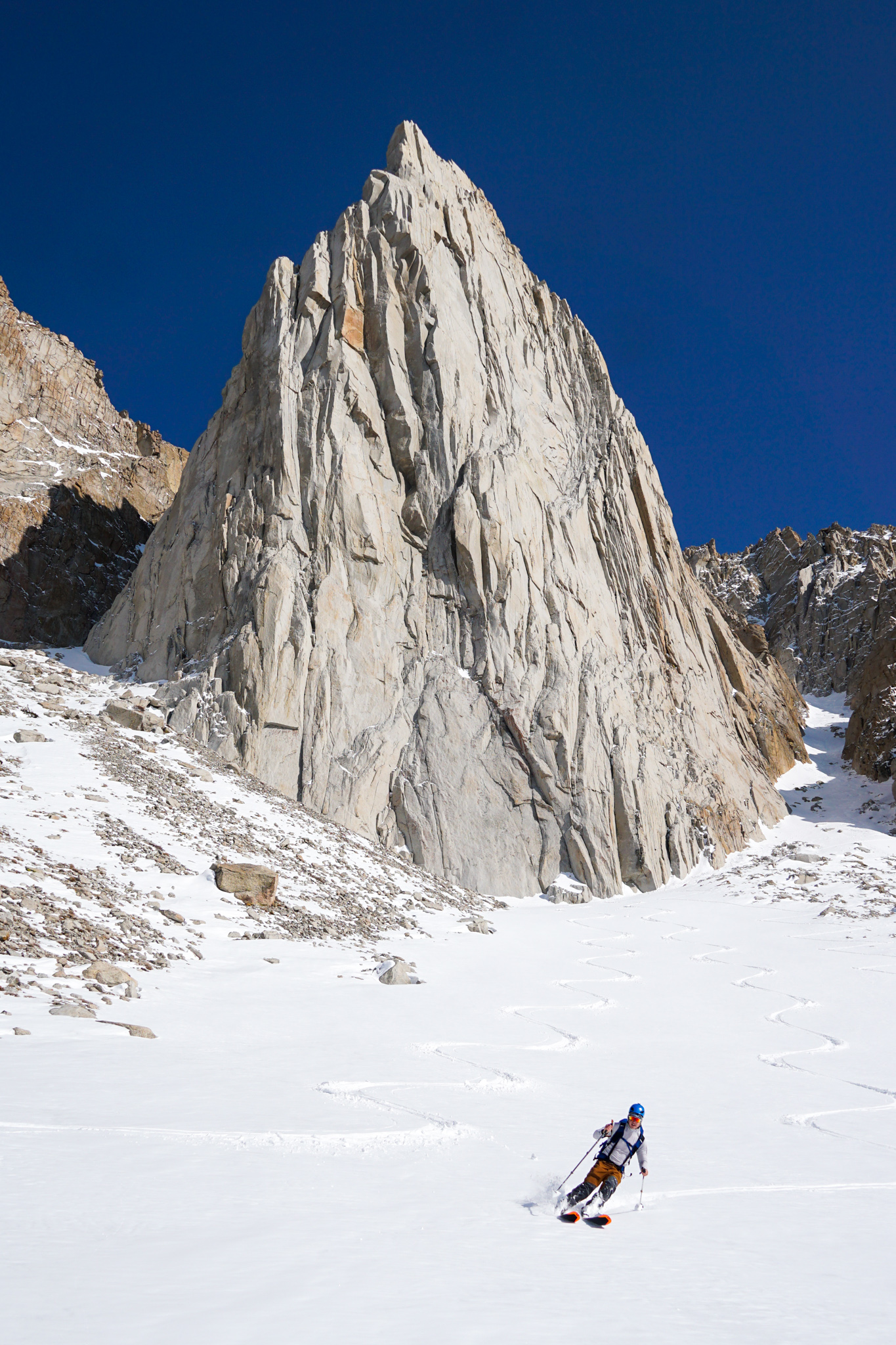 Returning to the High Sierra

To kick off our week-long trip to the High Sierra, John and I chose to start with the classic Sawtooth Traverse over three days. This traverse is really a loop from Twin Lakes, traveling beneath iconic peaks like the Incredible Hulk and Matterhorn. With a nice forecast but tons of fresh snow, we felt like this trip made sense to hopefully nail some steep couloirs in rare, late season powder.

After driving over the night before, we pulled into Mono Village and got packed. Fresh snow came down all the way to lake level, and it was clear and cool above.

We started with an easy walk up the valley. John was beyond stoked, like he always is.

Snow was a bit inconsistent as we crossed the river and began climbing towards Kettle Peak. We took our skis on and off a bunch of times, but stoke led the way.

Our packs were heavy, so we eagerly ditched overnight gear beneath the Hulk and quickly ripped a lap of north facing pow down the gully we had just skinned up.

Next, we headed up the Kettle Couloir. This is a classic line through the lower cliffs of Kettle Peak. The orange granite reminded me much of Washington Pass. The line tops out in the upper slopes, where the skiing is less than inspiring, so we turned around there and skied the couloir.

Every time I crossed 10k ft, I got very dizzy with a bad headache. I felt like I wanted to just fall over and go to sleep. We had slept the previous night at 7k, so it was a little disappointing to have so much trouble because I have gone from sea level to 10k in the past with no issues. I hoped it would get better, but it really did not improve throughout the day. Thankfully, John handled nearly all of the trail breaking and I just crawled behind him.

Sections of the Kettle Couloir were legitimate powder, stunning for such a sunny day in late April. The couloir is wide, allowing for fast turns.

From there, we skinned back up to camp and took a lunch break beneath the Incredible Hulk. This is one incredible hunk of rock. I never visited this section of the High Sierra during my trip in 2018, so it was great to see yet another special part of this range.

Our goal for the afternoon was to ski the couloirs immediately to the left and right of the Incredible Hulk. At this point, I was dubious of my body’s ability to manage two more long climbs, but I slogged on behind John. Feeling tired is one thing, but suffering from altitude is an entirely different challenge. It just felt like my soul had left me. Still, I put one foot in front of another, committed to carry on as long as my condition did not worsen.

Whenever we switched to booting, I strangely felt better. Usually I find bootpacking far more exhausting than skinning.

Hulk Right had its moments, with sections of legit face shots, but also was extremely sharky in sections and funky. I hit the first of many rocks.

My favorite part of the run was ripping the corn-pow in the apron beneath the Incredible Hulk. It was the kind of warm heavy snow that made me wish I had not brought my short, skinny spring skis, but the setting was unbeatable. Where else do you get to ski beneath thousand foot sheer granite faces? Perks of the High Sierra.

With adequate daylight, John was able to rally me for a third trip to the pain cave and begin the long climb up Hulk Left. We had to traverse far left past rocks before climbing up the line. This line turned out to be far more filled in and offered consistent powder for most of the couloir.

As we neared the upper constriction, the wind swirled and I was bitterly cold in the shade. I felt exhausted, struggling with the altitude and 8k+ ft of climbing for the day. But I also felt so happy just to be here, back in my second favorite range, experiencing it in a totally different way. At this point, it was obvious that I was not going to be my normal self this trip, recovering from a moderately bad case of COVID just two weeks earlier, but I felt grateful that my body was holding up okay.

The ski down was wonderful in stable powder. The snow glowed orange and yellow from the reflecting sun on the golden hallways above us. It was a beautiful moment, but we paid the price with some terrible breakable crust in the apron as we rushed back to camp.

We searched around for a campsite in the fading light and set to work as darkness settled around us. It was a cold night, with temperatures falling into the low teens. It took us many hours to get everything settled and melt enough snow, so we slept in the next morning until the sun rose above the Hulk and finally warmed things up.

It was after 11 am before we finally left camp and immediately felt way too hot. How can it go so quickly from a shivering night to a baking day? Problems of the High Sierra…

As we climbed up from Ice Lake Pass towards Eocene Peak, I absolutely died. It was a combination of the heat, heavy packs, altitude, and terrible globbing on my skins. I think it might have been the worst I have ever felt in the mountains, excluding any injuries. I crawled up to a rest point high above the headwaters of Piute Creek and took a long break. With some water and Ibuprofen, I started to feel better.

The climb of Eocene Peak was a pretty hilarious climb skinning a few inches of snow on top of shrubs. John swore it was the best condition he had ever had the climb in. Comedy of the High Sierra…

Eocene Peak offers the best view of Sawtooth Ridge, a knife edge ridge that extends from Blacksmith Peak to Matterhorn Peak. It is more sheer than most Sierra ridges and reminds me of the Palisades Crest.

Somehow I was now feeling better at higher altitude. We ripped down the backside in mostly fun breakable wind crust. Once again, I wished for wider skis, but it still was pretty fun.

The next part of the traverse goes up and down through post glacial benches beneath towering rock spires, with far reaching views out to the desert. I really liked this section because of the contrast between the rock, snow, and desert sage. It felt very unique and Sierra-esque.

Cleaver Col is the notorious crux of the traverse. The east side can sometimes feature challenging down climbing and there is even a rappel station. But this time, there was enough snow so that there was simply a 10 ft 3rd class down climb. Not bad for a 35% snowpack!

From the col, we did a bit more of skinning before a long descending traverse to a nice flat bench camp around 9800 ft. We arrived before sunset, giving us time to dry and lounge a little before we lost the warm sun. It made the night much more pleasant than the last.

On our third morning, we got up and started skinning towards the Matterhorn, the iconic peak of this region. I was finally starting to feel okay with the altitude.

There were an abundance of tracks in Ski Dreams and the East Couloir of Matterhorn, but none from the top of the West Couloir. So we booted up the West Couloir and found incredible preserved powder. The line was short, but very high quality!

The East Couloir, however, was ravaged by winds and extremely sharky. It was so nasty that we booted around the backside from the top, wanting to check out the alternative entrance. This provided some relief from the wind and beautiful views into the Yosemite High Country. For such a bad snowpack, it looked pretty damn filled in!

The alternative entrance to the East Couloir turned out to be not much better. We skied varying degrees of wind board and probably hit a dozen rocks. This was definitely the worst of the major lines we skied on this trip.

To complete the Matterhorn trifecta, we rallied for one lap up Ski Dreams. It was pretty skied out in the gut, but offered decent turns up high and later in the apron.

Once back at camp, we packed up and began the ski down. We skied down the “Ice Hose”, a walled in low angle couloir that splits the rock. It is a pretty cool feature, but the combination of refreezing moguled mank, avy debris, heavy packs, and skinny skis made for some of the worst skiing I have ever done. Ouch. John, of course, thought it was pretty good.

Below that, it was your typical spring game of chicken with taking your skis on and off and getting as far as you can.

Pretty soon, we had our trail runners on once again and were walking through the lively spring forest. From the bottom, it is easy to feel like skiing is so far away and summer so close. That is spring in the High Sierra.

The Sawtooth Traverse was a great way to kick off our trip in the High Sierra. This region has so many sheer granite walls and sharp ridges, but also sick ski lines. We skied some great powder in these north facing lines and also a lot of breakable crust and wind board to get there and back. Most of all, I remember the feeling of nostalgia, returning to a place that is very special to me – the High Sierra.