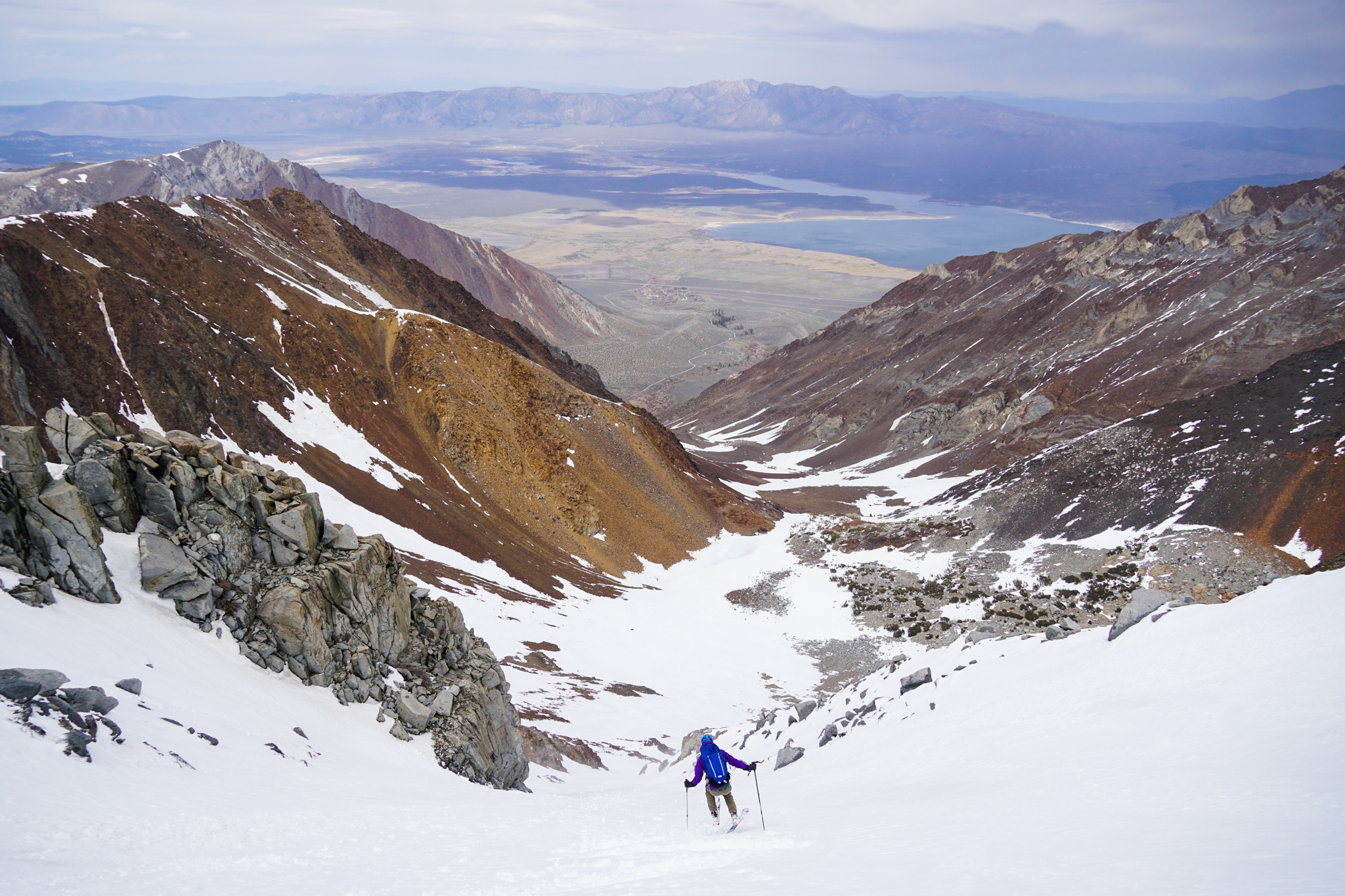 After an awesome three day Sawtooth Ski Traverse, John and I hit up some hot springs, ate a giant pizza in Mammoth, and slept in. For a “recovery” day, we decided to do the simple tour up Esha. The north face of Esha holds a few different lines and provides a simple, mostly snow covered approach from near the McGee Trailhead.

After crossing the creek on a log, we passed desert cacti on our way to the north facing gully that would lead us up to Esha. It felt hilarious to walk through the desert sagebrush to snow. Even on a bad snow year, especially this far south, we only had to hike about 15 minutes before reaching the snow gully. This approach is about as simple as it gets!

The snow was pretty sun cupped and rock strewn at first, but at least it provided mindless booting. Descending was a problem for future Kyle. Eventually we started skinning and crested a bowl where we got a view of the north face of Esha and its fingers.

We skinned up the apron and started to follow the existing booter up the left finger. The sky had become overcast and there were giant downstream lenticular clouds to the east (aka “Sierra Wave” clouds). We blasted throwback Kesha tunes, pumping some “Kesha on Esha”.

As we climbed higher, the weather continued to disintegrate. The NWS forecast had called for “mostly sunny”, but snow flurries began to fall from the sky. Up on the ridge, the wind was often strong enough to knock us over with skis on our back! We hurried to the summit, wanting to get off the mountain.

We started down the central finger, which descends from the summit. After some mediocre turns in chalk, the skiing turned to complete garbage. The strong winds had turned all the powder to grabby windboard. Other sections had weird sun effect but were refreezing in the cold. Jump turns or side slipping was the only way down.

After many jump turns, I was heartbroken to find that the soft corny snow in the apron had already refrozen to breakable crust! It was only 3 pm, but the freak snowstorm and windstorm had wrought havoc on the snow surfaces. I cursed my skinny skis and made giant sweeping traverses across the slope. So much for a rest day!

Below about 10k ft, we finally found some corny snow, although there was probably only a narrow window of about 300 vertical ft of good skiing before it became grabby, and then too rocky even to ski.

We booted down the final rocky snow finger and then were back in the land of the cacti, and quickly to our car. We definitely got skunked by the Sierra on this day, but at least it was a low price of entry and exit. Not every day can go perfectly and we were bound to have days like this with such an odd snowpack and variable weather! Live to ski another day!

3 thoughts on “The Fingers of Esha”