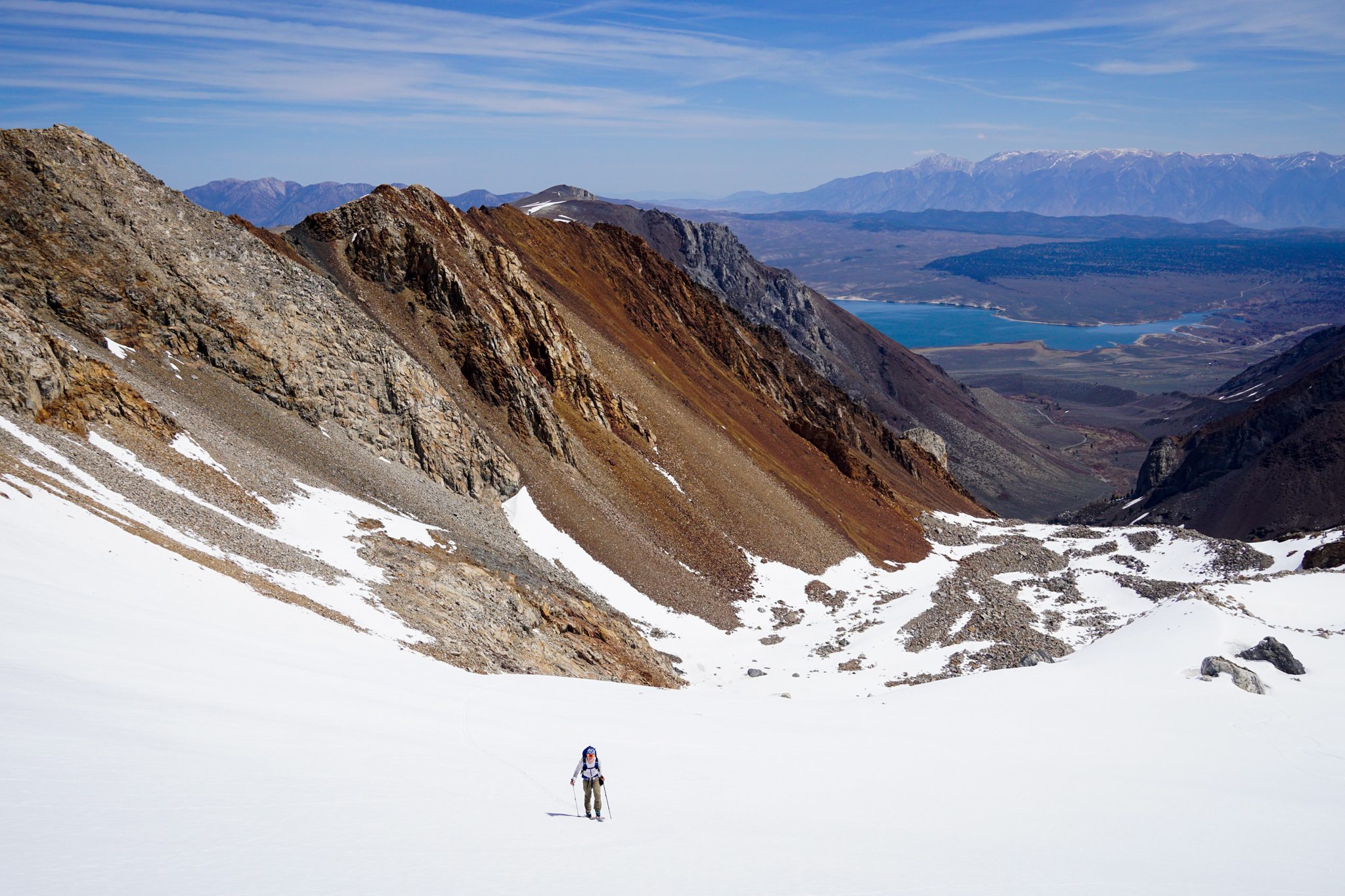 Tapering For the Weeklong Warrior

After some very bad skiing on Esha Peak the day before, John and I were a little perplexed what to do. It seemed that wind had destroyed any hopes of preserved powder on steep north faces. East, west, and north aspects had not burned down to corn yet. And there was rarely enough snow to ski any southern aspects. The best idea we could come up with was the impressive SE couloir of Baldwin, which we saw the day earlier and knew was in. Maybe it would be corn?

The approach to the Baldwin Cirque starts with a few miles of walking on the McGee Creek trail.

Following the advice of the guidebook, we stayed on the trail past the creek that flows down from Baldwin and hiked up through easy forests. After about 20 minutes of navigation, we reached consistent snow and were able to contour into the lower Baldwin basin around 9400 ft.

It was an easy skin up to the main Baldwin cirque at 10,200 ft. These east facing slopes were already starting to corn up so we wondered if we were too late.

The Baldwin Cirque is a very impressive post-glacial valley, walled in on three sides. The rock splits between many different colors, making for a beautiful mosaic. It had been a while since I had been in a cirque of this size.

We skinned up the apron and into the couloir. We found deep mank and a jumble of avy debris. Before we even got to the choke, we decided to bail since the skiing would not be any good and it could get dangerous in a few hours. John whooped and hollered down the apron, claiming it was “ripper corn”, when, in reality, it was just decent psuedo corn. John has about the lowest standards for skiing of anyone so I let him lap the apron while I took a nap in the sun on a granite boulder. We had big plans for our next trip, so I knew it was more effective for me to rest than lap mediocre snow. In a nod to my April Fools joke “Tapering for the Weekend Warrior“, we joked that I was “Tapering for the Weeklong Warrior”.

I eventually summoned up some energy to check out some of the north facing chutes at the head of the cirque. The snow was, as expected, varying degrees of hot pow, but it still made for some epic views.

We headed out, content with some decent skiing and fun exploration of a new area. This was a great information gathering trip, learning that lower angle and solar slopes were the most likely to hold corn. Now it was only time to taper, rest, and plan to go big…