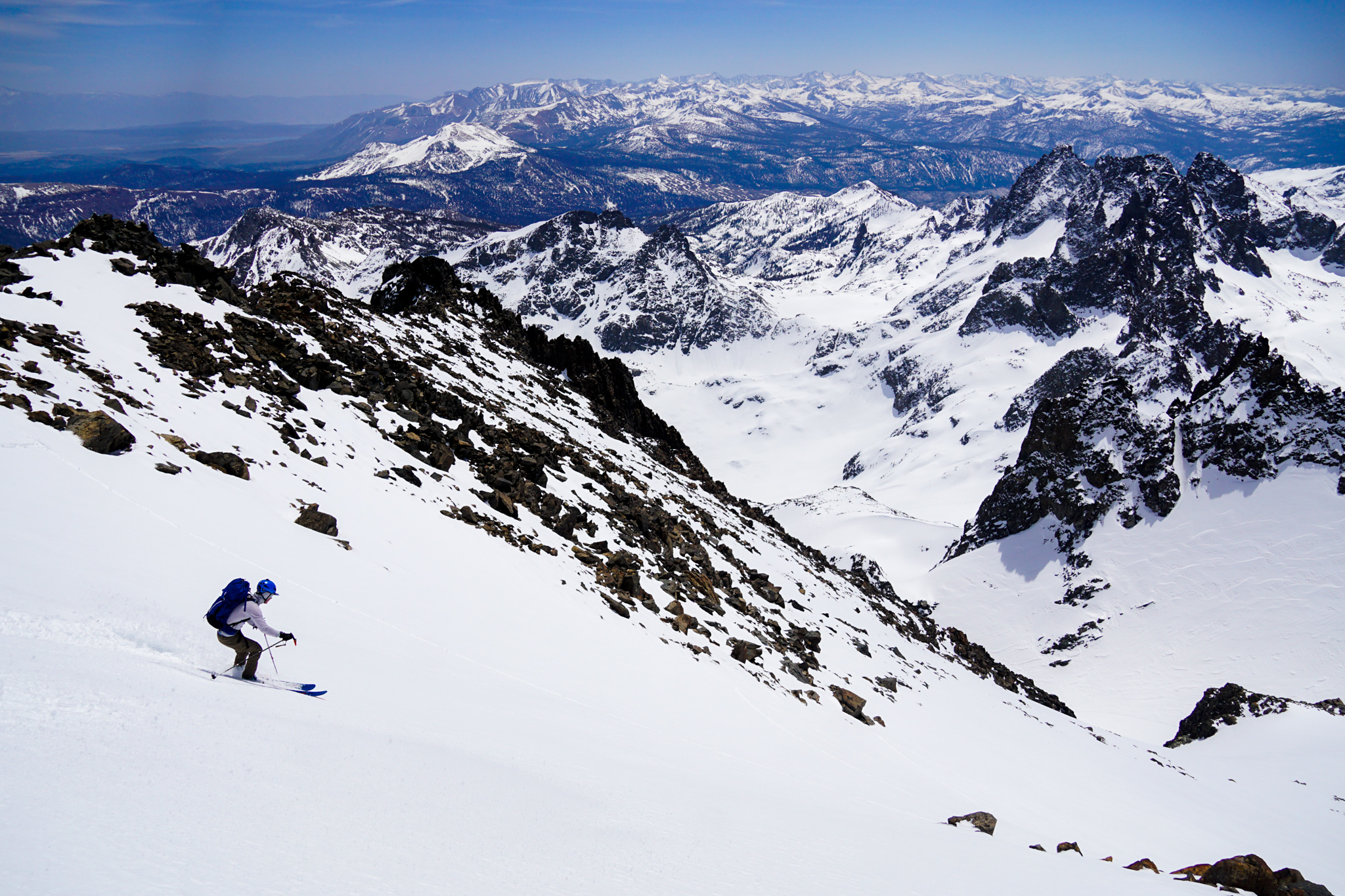 Going into our weeklong ski trip, John and I had two major goals: the Sawtooth Traverse and skiing Ritter and Banner. Ritter and Banner are the arguably the two most dominant peaks of the northern High Sierra, rising to about 13,000 ft. They tower over the Mammoth Ski Area. But they are rarely skied because of a long, rolling approach. We originally planned an overnight in the area, but because of bad weather, we decided to just go all in for a one day attempt.

Traditionally, the easiest way to ski Ritter is to go in from Mammoth along a sled road, and then skin by Shadow Lake. John had done this the previous year when he skied Ritter in a day. This route has many negatives: an icy, sled-bumped road descent in the morning, terrible patchy coverage around Shadow Lake, and a long soul-crushing climb on the way out back up the sled road. This time, he proposed going in and out from Agnew Lake. This route would feature a bit more up and down, but would hopefully be more pleasant.

We awoke around 1 am and were moving a bit after 2 am, hiking up the trail to Agnew Lake. We used the “tram shortcut”, a steep stair-cased route straight up the hillside following the tram that was in place to haul materials for the dams. Like the Enchantments region of Washington, all of these alpines lakes in the Eastern Sierra are dammed to control water flow.

As the trail traversed south of Agnes Lake, we hit continuous snow slopes and transitioned to ski boots. Crampons were nice as we efficiently climbed into the darkness above. We generally followed the trail and began skinning around 9900 ft. We cruised up and down past small lakes to Agnew Pass. In the pre dawn light, Banner Peak loomed in the starry sky.

We left our skins on the entire approach because of the rolling terrain. There was some dry trail on the south facing terrain below Agnew Pass, but then we were skinning once again, all the way to Thousand Island Lake. This approach reminded me intensely of approaching Titcomb Basin in the Wind River Range, but with much more consistent coverage.

We arrived at Thousand Island Lake right before sunrise, and I was taking a flurry of photos as the light on Banner turned purple, red, and orange. We completely nailed the approach, reaching the lake in under four hours. And our timing could not have been more perfect! The day was still young, but held the promise of greatness. You could just feel it in the air.

Up until this point, I had felt like we had been dancing on the periphery of the High Sierra. For the first time all week, I felt like I was back in the High Sierra. Towering peaks, giant lakes, rustled pines – yes, this was the magical place I had missed.

We enjoyed a morning stroll across the giant, 1.5 mile long lake to the far side before we climbed to Garnet Pass. Here, we joined with the Sierra High Route I did in 2018.

We kept skins on all the way Whitebark Pass, where we finally ripped for the first time all day. We zipped over firm snow to the basin beneath Banner and Ritter. It took us under six hours to get here. Now the real work would begin.

The route up Ritter starts with a steeper pitch and then a long gradual climb up an east facing basin. After a fast-paced approach, I started to wither in the heat and altitude. It was Day 7 of our trip, but I still felt like COVID was limiting my ability to acclimatize and I started to get really down on myself. John broke trail far ahead, but actually went up the East Couloir only to find it did not go, so we had to back track. Our hopes of skiing both peaks seemed to be on the ropes.

We backtracked and booted up the rocky section beneath the south face and then slowly climbed the final snowfield to the summit.

We limped to the summit, reaching the top about 9.5 hours from the car. Up to this point, we had not seen Banner and had no idea if the ski line was in. Part of me wished it was not in so we could just head back after Ritter.

The strip of snow on the SW Face of Banner appeared to be in! We were still doing okay on time, so maybe we would have the energy to add it after all. In the meantime, we took a great summit break from the highest peak of the Northern Sierra. In the summit log, we saw that we were the first to summit since superhuman Nathan Longhurst as he bags all 247 peaks in the SPS list (follow his efforts on this cool website). That dude is on a different level technically and physically than anyone in… this entire country?

Now it was time to ski down. With the exception of a 200 ft section of booting, Ritter provided over 3000 ft of moderate skiing. I had feared the snow would be too manky, but it was actually fun hot pow. B- snow, A+ setting. I’ll take it.

Back at the bottom, we took a long break at a bit of exposed creek. This water source was a complete life saver. We both downed a full liter and filled up all our water supplies. We felt life coming back into our bodies.

The climb up to the Ritter-Banner col climbs through a hot southeast facing basin. We had been concerned about wet loose avalanches. It was already 1 PM and nothing had moved at all, so we decided to proceed cautiously. We talked about it and planned a skintrack that would put us in hazard only briefly.

After being the weak link on the last climb, I found a resurgence of energy and broke trail through deep slush, getting us through the initial 1200 ft in just 40 minutes. I call this zonking – the second wind after bonking. I felt very proud for coming back to life after all the challenges I have faced this trip.

The final climb to the col goes through a narrower couloir feature. We skinned this too, making a dozen kick turns. It was a bit moaty, but it went, and just like that, we were through the crux of the day! We felt very relieved.

From the col, it is less than a thousand feet to the summit of Banner Peak. It begin to set in that we were going to, against many odds, pull this off. We strapped skis to our back and traversed across the rocks to the narrow snow patch on the SW Face.

We ditched the skis about 50 ft below the summit and made the final 3rd class moves in ski boots to the summit. Finally, we had made it. Ritter, and Banner, in a single push.

On these big days, it is amazing how quickly you swing between the highs and lows. For so much of the week, skiing both Banner and Ritter in a day felt like a pipe dream. I was struggling with post-COVID altitude problems, out of shape. The snow was still funky. The weather was messy. Pulling off 13k ft gain at altitude and a whole lot of distance seemed so outrageous. But we just slowly chipped away at it, settled into the rhythm of the hills, and put one foot in front of the other. I have been through a lot of these big days in the mountains, but I still surprise myself from time to time. This was one of those days where I did not think I had what it took.

We skied down, flushing small wet slabs the entire way down. We booted back across the face and then enjoyed much better pseudo-corn all the way down to Lake Catherine. Once again, I was back in familiar terrain of the Sierra High Route.

After a short boot to North Glacier Pass, we enjoyed perhaps the best snow of the day down gentle 10 degree slopes to Thousand Island Lake. Throughout the trip, we joked that if we wanted to ski corn, we just had to ski flats.

The size of Thousand Island became even more apparent as we skinned back across the lake. We still had a long way to go, with many ups and downs, before we were back to food and humanity.

We reversed the long approach from Thousand Island, skinning down, then up, walking dry trail, and eventually finally getting one last long run down to Agnew Lake. Here, we got the most corny turns all day!

Back at Agnew, we put skis on our back and it was just a race to get back to the car and pizza in Mammoth. We reached the car around 8:30 pm, for a full day of just over 18 hours!

Skiing Ritter and Banner was a huge day, comparable to my days on the Isolation Traverse and Snoqualmie Haute Route. I like to do one adventure day of this scale each spring but unlike previous years, I did not have any huge ski goals in the months leading up. John’s stoke for the Sierra and these particular peaks provided a great opportunity and challenge. On days like this, it feels like many days in one; by the time we were hiking out to the car, it seemed like lifetimes ago that we were hiking in. That is because long days in the mountains fundamentally change us, usually for the better.