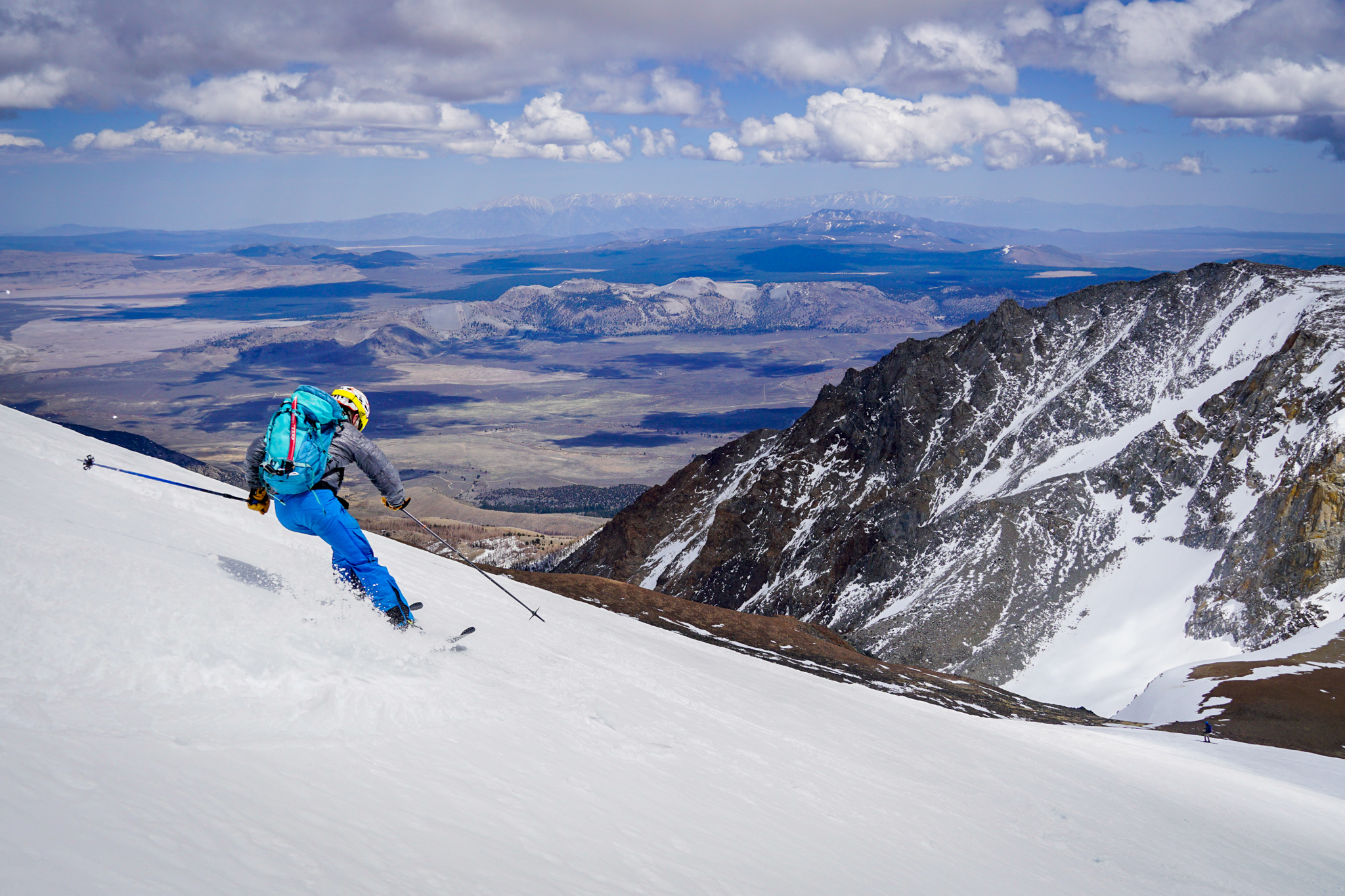 Blowing in the Wind

After a mega 18 hour day skiing Ritter and Banner, John and I were pretty exhausted. But we had two days left in our trip and Sofia, John’s girlfriend, was coming out to the eastside so we rallied for two more days at the newly opened Tioga Pass. We got a good 5-6 hours of sleep, then packed our bags once again and met Sofia and John’s friend Frank in Lee Vining. Our plan was to start at the pass, ski the Dana Couloir, then traverse across the Dana Plateau and ski a line dropping into Ellery Bowl, leveraging a short car shuttle.

It was a beautiful morning as we left the car at Tioga and started skinning up Mt. Dana. John and I both felt surprisingly decent after such a big day. In fact, I have never felt so serviceable after a giant day in the mountains. I was unsure how long it would last.

It was cool and breezy as we skinned up sastrugi. We checked out Solstice Couloir, but it didn’t look appealing.

From there, we booted to the summit of Mt. Dana. It was bitterly cold from the wind and clouds were building. Most of us had puffies on while hiking uphill.

We were able to ski down the south ridge, which I understand is not always the case. The snow was trying to be corny, but too much like sastrugi from all the wind during the week. Frank, an expert skier, made it look easy while the rest of us struggled a bit.

The winds in the Dana Couloir itself were insane! We skied it one by one. At times, I had to turn my face away from fall line and just wait for wind to pass before making more turns. The surface was windswept and generally firm. Technically, we got face shots, not from abundant powder, but from wind blasted snow.

Down in the basin, we hoped to escape the cold and wind but had no luck. We sighed as yet another day forecasted to be “mostly sunny” turned stormy. Some springs are just like this.

We climbed up to the Dana Plateau and began a long journey across this windswept landscape. It felt hilarious skinning across mere inches of snow and sand, watching clouds race by. Where is the skiing? I just followed behind as Frank and John scouted out ahead.

After what felt like an hour of wandering, we found ourselves at the top of the alternate entrance to “Chute Out” in Ellery Bowl. It seemed to go, and none of us really cared about snow quality at this point. John and I were also starting to finally feel worn out at this point. Curiously, my flat skinning muscles were the first to go.

Snow was pretty bad in the upper part, making for slow going. We knew that steep north facing snow would be bad, and yet here we were, skiing two steep north facing lines. But once we got into the wider, straighter part of Chute Out the snow was decent and kinda corny.

This led us right down to the car, making for an easy exit. We finished with some beers down in Mono Village before more hot springs and some excellent food Sofia brought! Only one more day of skiing to go!