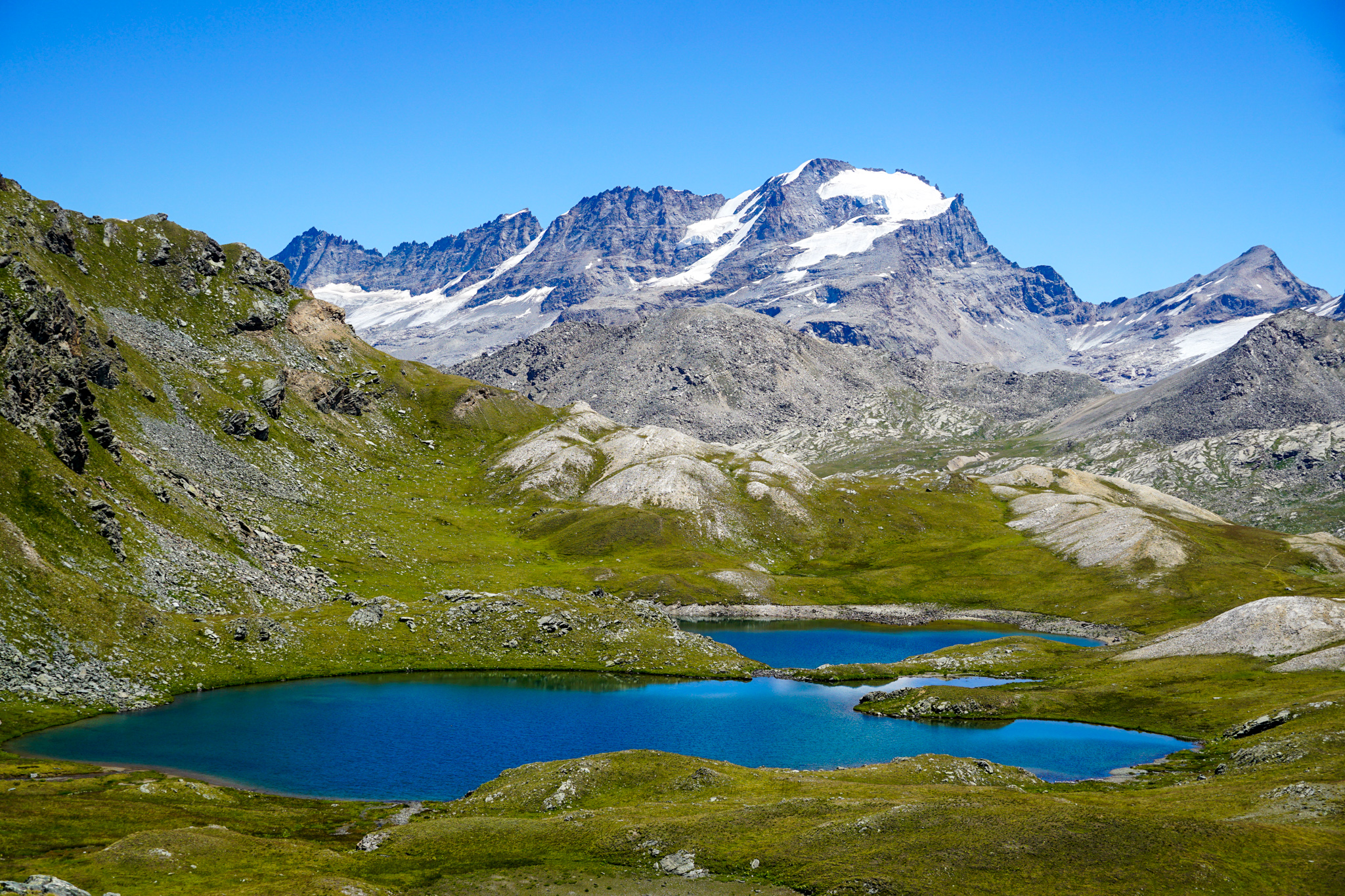 As we moved over to the Italian Alps, I wanted to check out Gran Paradiso National Park. Gran Paradiso is the only 4000m peak entirely in Italy and although it is not an international destination, it is popular amongst domestic tourists. Looking at satellite imagery, it seemed to offer more high meadows and low angle terrain, perfect for trail running and exploring.

Kelly and I began the morning with the long windy drive up to Le Pont from Aosta. Here we found a massive parking lot with hundreds of cars, but no people. The trail was empty as we hiked up towards Monte Teu Blanc, an 11,280 ft peak to the west.

This is a drier part of the Alps, and larch forests gave way to barren tundra feeling terrain higher up. The flat, windy river reminded me of the Northern Rockies like Beartooth or Wind River Range. Kelly was feeling a bit tired so we decided to split up here. She would meet me at the Refugio Savoia on my way down and we could head out together.

I left the main trail and followed a very faint trail past some old abandoned buildings. Other than wooden support beams, they were entirely built of flat stones sourced from the area. I have no idea how old they were, but they were in remarkably good condition because the stones do not decay.

I found an old road that continued along the side of the broad valley. Even though it seemed closed for a while, it was still in drivable shape. I guess it actually went all the way over Colle del Nivolet into a different part of Italy.

There was supposedly a trail branching off to Lago Nero, but it was so faint that I could not find it at first. Eventually I found it as I roamed up the grass. At times, when got past an earshot of the high frequency power lines, it felt remarkably remote and wild. I could have been deep in the Beartooth or Winds for all I knew. Lago Nero was stunning and there was not a single sign of a campsite, something that would be nearly impossible to conceive of in the States.

As I continued up to Colle Leynir, I joined a pretty major trail and constant stream of people. The climb up to Monte Teu Blanc had one steeper section that formed a traffic jam. Where did all these people come from? It became apparent to me that everyone else was coming from a different direction that involved a fair bit less effort than my way…

The summit had nice views of many notable peaks like Monte Bianco (Mont Blanc), Grand Jorasses, Grand Combin, the Matterhorn, and Monte Rosa. This region of the Italian Alps has many high, flat, relatively crevasse-free, dying glaciers, much like the Northern Winds or Beartooths. With the dry winter and warm summer, they were looking extra sad.

There was not a single foreign speaker on this summit. All Italians. I guess we found the “locals’ spot”. Or at least a place that was not touristy on an international level. Another strange observation was that nearly half of the hikers were wearing La Sportiva Ultra Raptors of a dozen different colors (they have more options here in Italy). The shoe shop in Aosta had over ten different patterns and colors of Ultra Raptors, so they seem to be the chosen shoe here.

I had a schedule to keep, so I departed and jogged down towards the Refugio. I passed Lago Rosset and a few other beautiful, giant alpine lakes. There were tons of Italian families here, lounging at the lakes. I was getting closer to the source of all the people.

I ran into Kelly near the lakes and we descended to the Refugio Savoia together. She told me it was actually a full-on restaurant and market and you could drive to it from the other side! I had seen a road on a map but figured that it must be a decommissioned road – why would there be an active road to an 8000 ft alpine pass? Because it’s Europe – that’s why. These things feel inconceivable to me coming from the Cascades, but are perfectly normal here.

I got an ice cream as we watched tourist buses pass by. People of all ages lounged in lawn chairs by the lakes. It was such an unexpected scene I did not know really what to say.

We had a slow walk back down the valley and to Le Pont in the afternoon sun. The trails were much more alive than the morning, with families out weekending in the mountains.

I felt like my experience in Gran Paradiso gave me “wilderness whiplash”. It was so entertaining to bounce back and forth from surprising solitude and lack of human impact to crowded national park vibes. But this region definitely still has a lot to offer and would be very beautiful in the fall with all the larches.