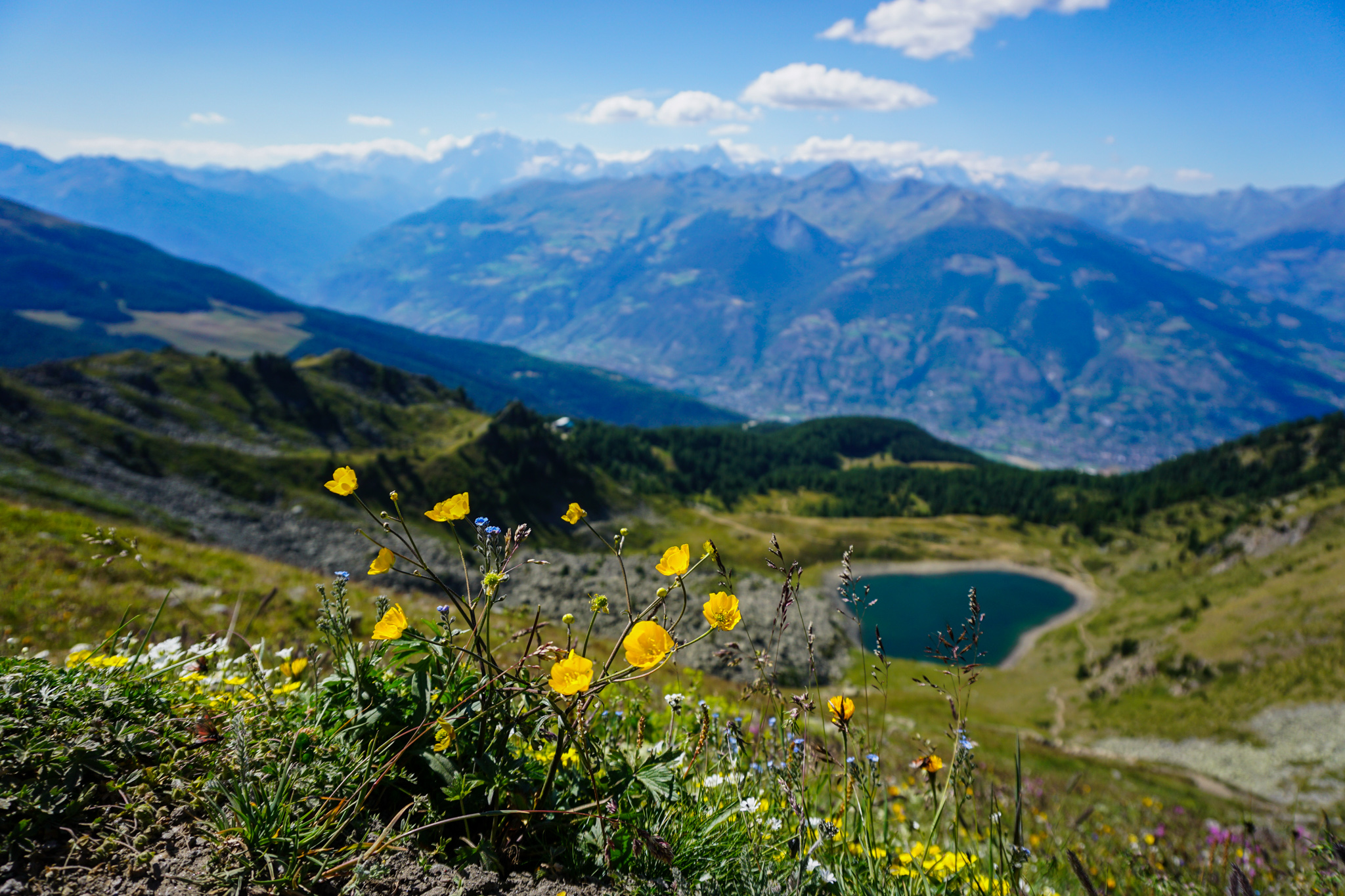 Kelly and I had a wonderful time staying in Aosta, Italy. Each evening we walked the cute downtown, trying different restaurants and gelato (the food is so cheap and good!). Aosta is set deep in a valley with mountains in all directions. Two peaks, Becca di Nona and Monte Emilius, tower over the town, rising nearly 10,000 feet in just a few miles. After a week in Aosta, I decided it was time to run up these impressive peaks.

The easiest route up the peaks is from the ski area Pila near town. You can drive up to Pila, but we took the Euro way and rode the gondola from town. It is only $7 for a roundtrip ticket that gains 4,000 ft, an incredible deal! There were other hikers and mountain bikers heading up, but no other Americans. Aosta is definitely only a domestic destination, not international.

Kelly and I rode up together and then I went out for a longer day while she went for a shorter trail run in Pila. The larch forests on the north side of the ridges were beautiful and reminded me of forests on the east side of the Cascades.

I passed around the ridge and descended to Comboé Superiore, a goat and cattle ranch. I got stuck for a few minutes behind a cattle drive, but then was on the move.

It appears there is a vert race from Aosta all the way to the summit of Becca di Nona, so I passed trail signs as I followed the trail up the west side of Becca di Nona.

I was feeling pretty good and flew up to the top of Becca Di Nona in under 3 hours from Pila. There is a 8 foot tall statue on top, which must have been a bit of effort to get there. The Aosta Valley was 9000 ft below. Endless 4000m peaks were to the north along the Italian-Switzerland border.

I raced down nice sand to the saddle with Monte Emilius. There was a dotted line on Caltopo up the ridge to Monte Emilius, but Strava heatmaps showed almost no traffic. Would it be challenging scrambling? It turns out it is a via ferrata!

I started up the ridge. It seemed to be a very new via ferrata, with really shiny, high quality hardware. The amount of cable laid was impressive. In most cases, it was completely unnecessary as the natural route would just be 2nd to 3rd class scrambling, but there were a few short steep sections where the ladder rungs were nice.

The crux of the scramble definitely would have been a deep chasm, but instead I found a convenient suspension bridge. Wild!

The latter part of the ridge had a fair bit of ups and downs, but I still made it to the summit of Monte Emilius in under 5 hours.

The summit view from Emilius was among my favorite views of the entire trip. It has such incredible relief above the Aosta valley and is situated in the center of so many beautiful peaks. I could see Gran Paradiso to the south, Monte Bianco to the northwest and the Matterhorn and Monte Rosa to the northeast. The area around Monte Emilius itself is very barren and post-glacial, with a few tiny ice sheets left and many rock laden lakes. It reminded me of the High Sierra or Winds in some ways.

I heard a swoosh and figured a bird was diving, so I was surprised to look up and see a glider! It was a small plane but with no engine and circled around my summit, going higher and higher each loop, riding the thermals.

Another group of guys arrived on the summit, coming up the standard route from Passo del Tre Capuccini. They were locals and asked me if I was doing Tor des Geants, a 330km race around Aosta valley in September. My friend Ely will be racing it again this year for the second straight year! Aosta also hosts the even harder Tor des Glaciers, one of the hardest and most beautiful mountain races in the world.

The descent down the standard route down to Lago Gelato was slow and tiring. It was an annoying moraine, probably rather recent and thus awkward and unstable.

But I knew that I was well on schedule to reach Pila before the final lift down at 6 PM, so I took it easy and mostly hiked my way down.

After passing Refugio Arbolle, I had one little climb to get back in Pila. Here I passed a stream of probably 50 members of the Italian military out training.

As I crested the ridge, I took a moment to rest, eat my food, and let the breeze and views blow through my hair. For a sleepy ski area accessible straight from town, Pila is in a pretty beautiful place.

I jogged back down to the lifts and rode back into town. It was 95F, but not too awful in the shade of the town and I was pretty heat acclimatized at this point. I stopped for a massive $6 loaded Kebab wrap at my favorite Kebab place (that place is a stinking good deal, if you can stand the 110F temperatures inside for a few minutes to order) and walked home. Not a bad day, door to door in the beautiful Aosta Valley.

After 6 weeks of traveling for weddings, pleasure, and work, I am very happy to be home and not getting on another plane for a while! This year has taken me to a ton of new places, from Alaska to Europe. Traveling to new places satisfies a curiosity to explore while also reinforcing the appreciation I have for places close to home. Thank you to all the people who made these travels so fun and rewarding, and I feel grateful to have these opportunities and such a great home to come back to!
Blessed is the light sweeping across the Bernese Oberland, saying "Good Morning Switzerland".
Becca di Nona and Monte Emilius tower nearly 10,000 feet above downtown Aosta. One day I took the lift up to Pila from town and then scrambled the two peaks, finding an unexpected via ferrata between them! It was a fun day, and pretty nice to go door to door from Aosta to such a beautiful and high vantage.
Finished writing about Arête du Diable a few weeks ago! This was a big surprise, not planned until a few days before. I had never met Dr. Dirtbag before but the day went super well and it was a great time, helping him through the most technical peaks in the 4000m list!
Trail running in the Alps... More like walking on sunshine 🌞. Note: all these photos were staged (obviously).
Today is our last day in Switzerland and Europe. It has been a wonderful vacation to explore some of the most famous mountains in the world and equally famous mountain towns! Even if the Alps resemble the American Alps in many ways, they are culturally so different and that was awesome to experience.