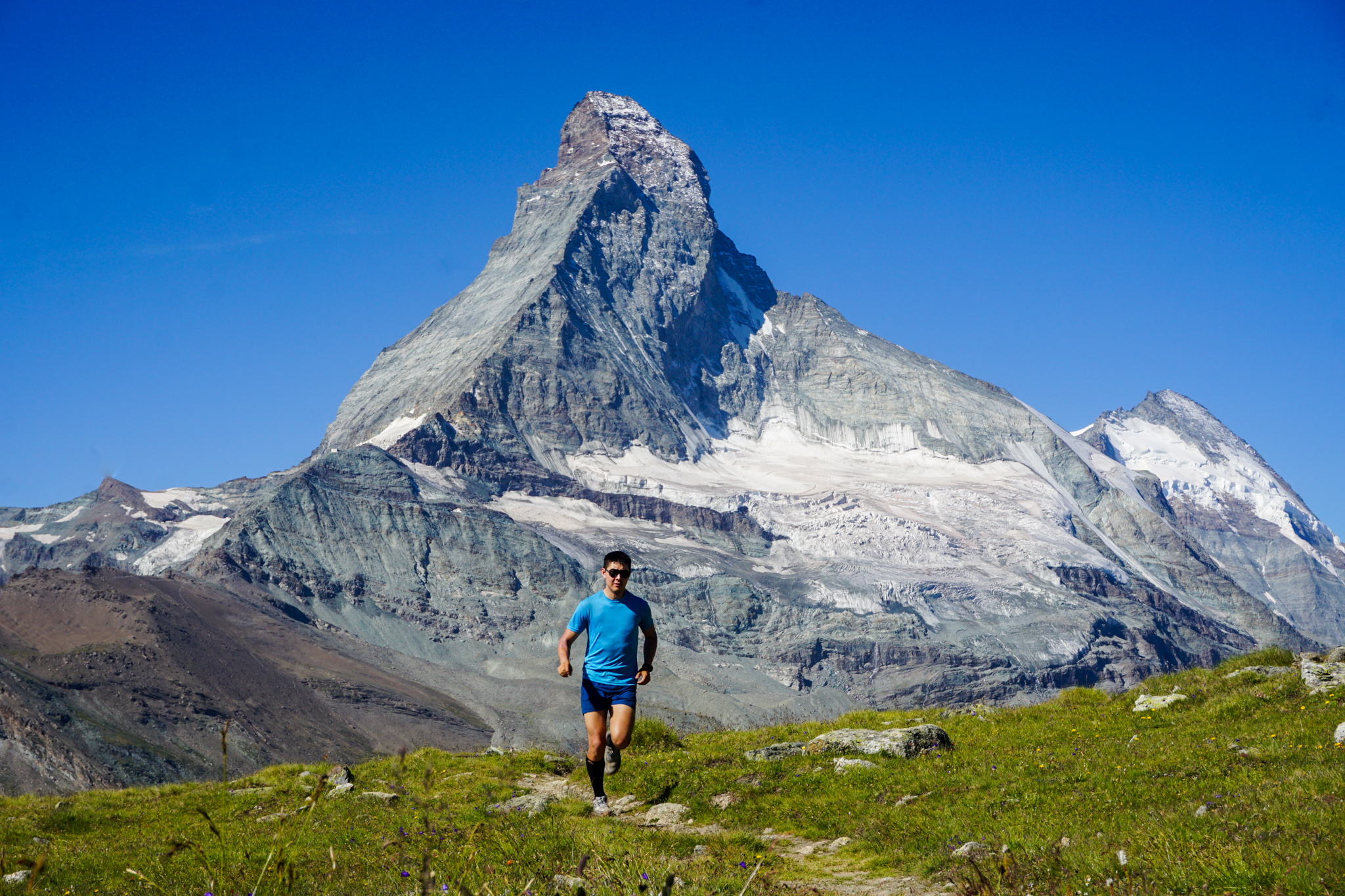 After a fun day climbing the Riffelhorn with Kelly, I went out for a long walk/run around Zermatt. I began by taking the trail up west of town. Here, I got passed by a Euro speed monster making moves! It was actually the first person that had passed me all trip, despite the reputation of speedy Euros. We eventually figured out that only fast Euros (read: professionals) are on Strava, so it creates a very distorted perspective of speed in Europe.

Anyways, I branched off and found a very quiet, beautiful trail climbing in the morning sun. My legs were pretty tired from the Emilius Traverse just three days ago, so I took it easy.

The trail leveled out around 8700ft and I got slammed in the face with a view of the Matterhorn. I had to take a little self-timer photo with the iconic peak.

The trail followed a bench around 9000 ft before descending down towards the Zmuttgletscher (Zmutt Glacier). The Zmutt has receded vastly in the last hundred years, leaving behind some glacial lakes that are managed by dams and an interesting post glacial biome where every larch tree is exactly the same height. It is impressive how fast the forest reclaims the moraines.

After crossing the valley, I climbed up towards the Hotel Schwarzee, where I would meet Kelly, who was taking the lift up.

I arrived exactly at noon, just as I promised Kelly. We started up the trail towards the higher lift station. We quickly entered recent post glacial terrain and the landscape became extremely barren and rocky. The water was as silty and brown as it gets. Honestly, it was some of the uglier post-glacial terrain I have ever been in.

We headed inside at the upper lift terminal to get out of the heat and drink some water. Even here, there were ads for $10,000 Swiss watches.

I wanted to do this day human powered, so we both did the nearly 5,000 ft descent on foot. It was a rocky trail, followed by an improbably steep and falling apart road, finally punctuated by pounding steps in the heat of the valley. Mildly unpleasant, but perhaps I was becoming Euro-soft and needed a bit of a beating.

We arrived back in town and I felt pretty worked honestly. It was cool to see many angles of the Matterhorn, but this run confirmed a suspicion I had about Zermatt – that the trail running was a bit limited with pretty similar views from every angle and plenty of crowds. It is the kind of place that is great to visit once, but does not inspire a return trip, unless I was to actually climb the high peaks.