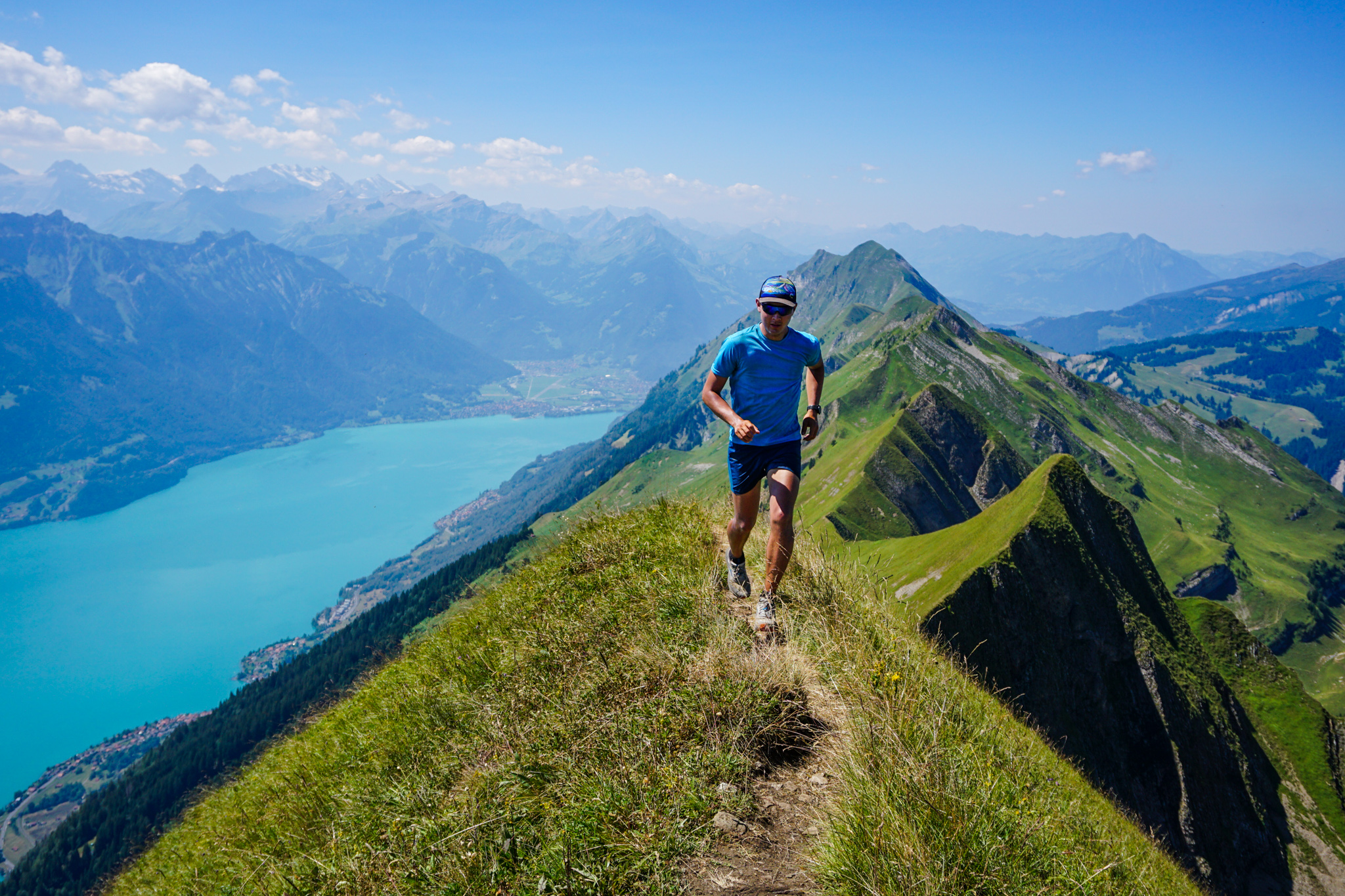 When I started researching objectives in Switzerland, it took almost no time to come across the famous Hardergrat. The Hardergrat (German for “hard ridge”) is an improbable ridge trail above high above Interlaken and the turquoise blue waters of Brienzersee. I was immediately hooked by the unique grassy ridges and trail that traverses the spine of the ridge for many miles. It became one of my top objectives for the trip.

The Hardergrat is rather famous on the internet and we had multiple friends that had done it. The perils of the Hardergrat receive a lot of hype – “Never attempt this route the day after rain”, “10 reasons NOT to do the Hardergrat”, “You have to (gasp) start in the dark to finish in time for the last train down”. It was actually kind of hilarious reading all the comments about how terrifying and dangerous the trail was. This hysteria certainly intrigued Kelly, enough so she decided to attempt her biggest vert day ever and come along!

The Hardergrat is a point to point hike that begins in Interlaken and ends at Rothorn, where you can take a Swiss steam locomotive down to Brienz at lake level. Since we were staying in Ringgenberg, we decided to just start from our door and hike trails up to the ridge, not missing out on any of the good part.

We got a 4 am start to try to “beat the heat” but it was still warm and muggy down at lake level. In the brushy forest, the humidity was high and Kelly was quickly sweating like crazy. The biggest challenge of this route is water, or its lake thereof during the 9,000+ ft of gain. Kelly started with almost 3 liters of water while I only had 2 liters of capacity.

We encountered one blowdown on this climb, the first of the entire trip in Europe. There were also mosquitoes and other biting insects, a first of the trip.

It was beginning to get light as we reached Roteflue, with 4k gain already in the bag. The ridge is still pretty heavily treed in this section, although there are some nice cow pastures on one side.

The trail finally entered the alpine around Suggiture. Here we found a bunch of locals enjoying a sunrise hike. It turns out you can start this hike from Lombachalp, cutting off over 3,000 ft of gain and the boring section. Locals’ beta!

Up to the Augustmatthorn, the trail was very much a real trail with no exposure. After this peak, it became “technical”. The Swiss have some complex trail rating system of difficulty and exposure. The section beyond the Augustmatthorn is so technical that it is a different color. Scared? I know, right?

The expanse of the Hardergrat is truly magnificent. Mile after mile of uninterrupted ridgeline with steep grassy hillsides on either side lay before us. No bushes, no cliffs, just grassy goodness. It was like a grassy dream.

There was a steep section descending that had a fixed line for aid. Throughout the entire route, there were quite a few steep descents. I could see how you could get seriously hurt if you fell. But there was always space to place your feet on mostly flat ground, like steps in the dirt. Call it “high consequence hiking”. Other sections, however, were easy and cruiser.

We started to pass parties going the other direction, who had taken the first train up from Brienz. It turns out that the locals only do the Hardergrat downhill, so that the steepest sections are ascents, not descents. Smart! Many of them were also using La Sportiva Nepals, which seemed like the absolute worst choice of footwear on this hot grassy hike. But Euros love their Nepals…

At some point, the heat and sun started to get to us. It was blazingly hot and humid in the direct sun on the ridge. When the trail had some exposure to the north, there was a cool breeze to save us, but when the trail was even just a few feet to the south side of the ridge, as was mostly the case, it was incredibly sweaty. I carefully rationed my water for a long day in the sun.

The relief above the lake is pretty impressive. It felt like you could tumble 5000 ft into the water below. Beyond the lake, many 4000m peaks beckoned. It is certainly a stunning trail. But it was starting to feel monotonous with all the ups and downs. I think mostly, we were simply hot.

The “crux” of the route is probably the section after the Tannhorn. There is a steep descent followed by an impressive knife edge grass ridge. Following a foot path barely a foot or two wide in places, either side dropped away to nearly 60 degree dirt and grass. It was like the knife edge on Eldorado Peak, but steeper, and grass instead of snow!

After the Tannhorn, things finally eased up for good, but we still had a ways to go to the finish. Kelly was slowing down, but she powered through until the end, unlocking a new personal best for most gain in a day (just under 10k)!

I immediately chugged a liter of water at the bathroom and then we bought ice cream at the food stand. The train station is a popular tourist destination, standing 5500 ft above the lake. There are old touristy steam locomotives that take tourists up and down. Unfortunately, everyone else was also trying to head down in the afternoon and we had to wait nearly an hour to catch a train. They have a super inefficient system where there is only one track for trains to go up and down, so they run into each other and have to wait. Even once we got going, the train had to stop mysteriously for half an hour in the middle to let another one pass. The entire train ride down took an hour and a half, meaning we could have hiked down in the same time, but that would not have been the Euro way…

It was getting late by the time we finally made it down to Brienz but fortunately the modern train along the lake shore quickly whisked us back to Ringgenberg.

So did the Hardergrat live up to the hype? I feel that it actually did. It is a truly unique ridge line hike that is quite challenging and technical. The duration and narrowness of the ridge is remarkable, as are the epic views down to the lake. It was super fun to have Kelly along, and watch her push her comforts with exposure and physical limits! And it was a great way to finish up our time in Europe.

And with that, Kelly and I have compiled our version of:

10 reasons NOT to do the Hardergrat