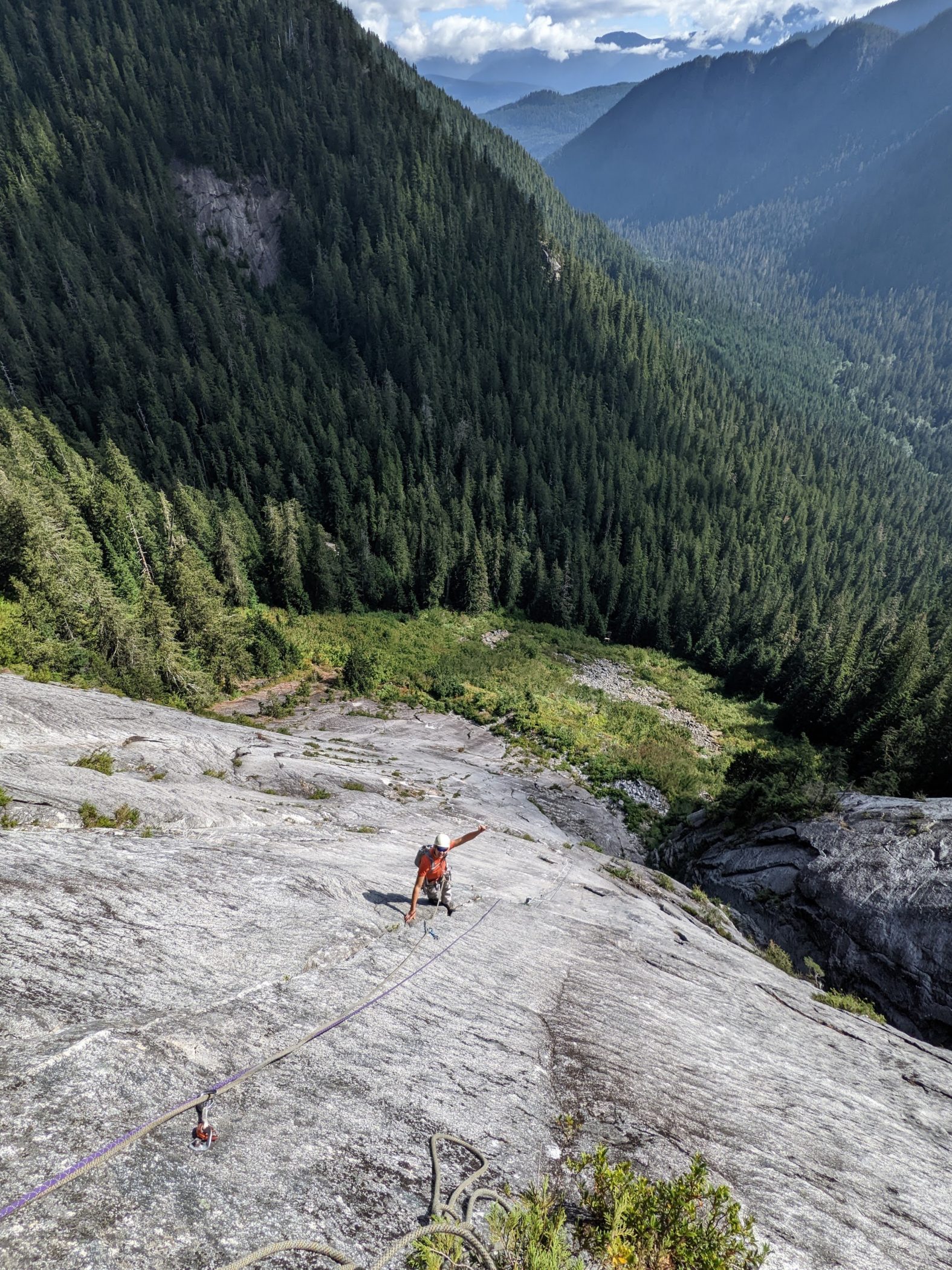 Back to Slab School

Like many climbers, Rio only climbs the finest granite. I told him about the vast quantities of clean granite slabs at Darrington after my adventure on the Darrington Rodeo, so he wanted to check it out. Last September, we planned to go but we got rained out. After a crazy summer of traveling to Europe and tons of other obligations, I finally had a free weekend at home at the end of August.

The only problem was it looked like we might get rained out again. We debated going to the east side, but ultimately decided to roll the dice with Darrington. It had not rained in so long that we guessed any rain would dry out quickly. After some morning showers, we drove out in the afternoon to Darrington and Three O’Clock Rock.

Three O’Clock Rock is home to easy and moderate routes up to 8 pitches long just a mere 30 minutes from the car. It is supposedly the most “popular” Darrington crag, but that is not saying much. We arrived at the base of the wall around 4 PM to clearing skies and perfectly dry rock. It looked like our gamble was going to pay off.

Silent Running is an excellent 7 pitch route that starts at the base of the wall. It starts off easier for a few pitches before ramping up to legit 5.9 friction climbing. Neither Rio nor I had really climbed true friction slab at this grade, where you really have no features for your hands. Fortunately, the bolt spacing was rather generous (10 ft) during the sections harder than 5.8. For this reason, Silent Running is a great climb for newer slab climbers.

The final two pitches were probably the most challenging. I took one small fall on the 5.9+ 6th pitch and Rio fell once on the 10a crux 7th pitch. I could feel my achilles tendon adjusting to the friction climbing, becoming comfortable with dropping my heel and balancing on my feet.

We simul-rapped down with two ropes. I always love the vibes of Darrington, with old growth forests, random granite slabs jutting out of the wilderness, and distant peaks. It feels so wild and different.

We had managed the 7 pitches up and down in just 3.5 hours and were able to hike back to the car by dark. So far, Rio was pretty impressed.

We took it easy the next morning and walked up to Three O’Clock rock around 8 am. There was only one other party, but they were already climbing Total Soul, perhaps the most famous route on the wall. We gave them some time and then started up behind.

Unfortunately, Total Soul suffered a major rockfall above the fourth pitch in 2019. It did not change the route much, but it has provided a constant source of dirt on the lower pitches. I had to frequently wipe my shoes clean and it definitely made the lower pitches feel more difficult than they should have.

The amount of vegetation that finds a way to live on a giant granite slab is remarkable. The tiniest ledge collects detritus until it turns into soil and surprisingly large bushes and trees sprout. It appears the rockfall was created by roots breaking apart cracks and flakes in the granite.

While the first three pitches were rather dirty and unimpressive, the fourth pitch was incredible. It followed a quartz dike with intermittent finger cracks. This was definitely the money pitch!

Pitches 5, 6, and 8 all had 10b or so cruxes. Fortunately, there are plenty of bolts in these spots, as both of us had a little trouble getting through. This was the hardest slab I had ever climbed before and it felt desperate. I am not sure how people climb 5.12 slab and harder. It seems like dark magic to me.

While Total Soul tops out on the rock, there are not really any different views than during the climb. The old rap station is gone, so we had to veggie belay down a brushy slope before reaching a tree and beginning the double rope raps from there. Six raps got us down to the ground.

This was a fun weekend with a great climb-to-effort ratio. There are many Darrington crags and so it is great to just explore new places and check out the climbs. Silent Running and Total Soul were both high quality routes, although Total Soul is definitely harder and involves substantial runout at the 5.7-5.8 grade, so I would not recommend it for a first slab climb. Darrington seems to scare away most Washington climbers, but it is truly vast and surprisingly accessible!