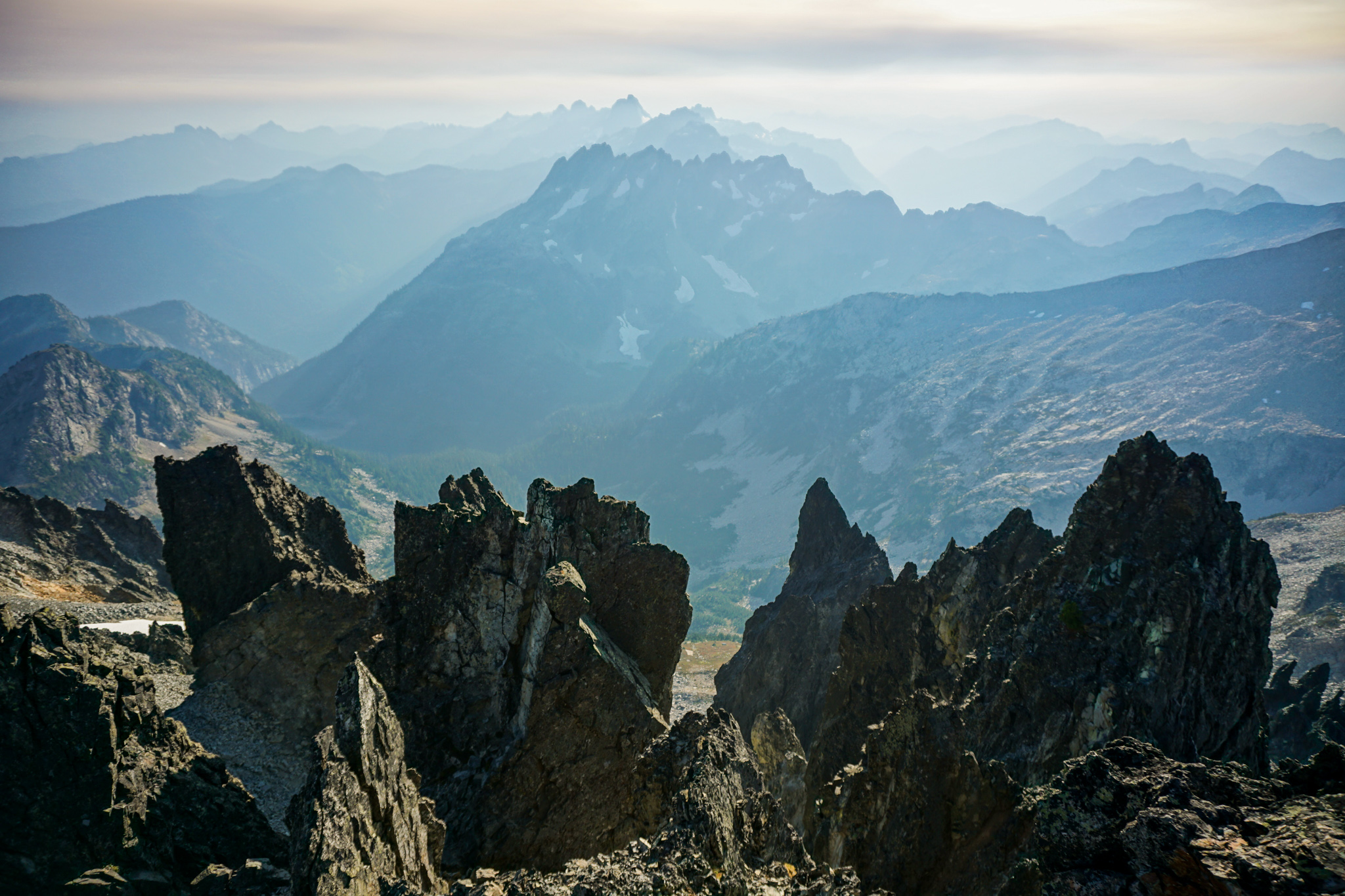 The Alpine Lakes Wilderness is perhaps the best zone of the Cascades for cross-country travel. There are so many lakes, granite benches, and pretty meadows to connect. Daniel was back in town after racing the Rut and wanted to go out for a longer day in the Alpine Lakes Wilderness. We sent some route ideas back and forth, and settled on a combination of the Paddy go Easy High Route and a loop over Mt. Daniel from Jade Lake. This would string together some new terrain for both of us, as I had done the Alpine Lakes Crest Traverse and Thunder Robin High Route, but never connected the terrain between.

To complete our group, we recruited Daniel’s friend Kolbe, a speedy runner, as well as the PNW legend Uli Steidl, who, at twice our age, can still kick our butts any day of the week. Uli was also looking for a long day in the ALW so we decided to finally link up.

As sometimes occurs in early September, the weekend was setting up for an easterly flow event, bringing smoke and elevated fire risk. We monitored the HRRR smoke forecast closely and there seemed to be a possibility it would be okay in the central ALW during the day Saturday, but it was not until 3 am that I made the decision to go out. If it was bad, we could cut the route short at Robin Lakes and go home.

The forecasted high was nearly 90F in Seattle, but it was 36F at the Paddy Go Easy trailhead when we arrived. Down in the valley, you could smell the smoke, but as we climbed in elevation, it got substantially better.

At the pass, we took a left and started moving through the red rock. There are many ways to do this high route, but we generally tried to get through quickly, forgoing summits and taking the most efficient line.

We opted to traverse west beneath Sherpani Peak, since I knew that summit was steeper and slower. This section was non trivial, and had many hidden cliff bands and trees. Once we reached the pass north of Sherpani, we gained a beautiful granite ridge with great scrambling.

The next section is easier and features some beautiful tarns. It was our first water source of the day, so we took a break and refilled.

Next we climbed up to a saddle and found a climber’s trail that descended to the Robin Lakes. It was my third time to the Robin Lakes and third different approach. It had taken us about four hours to this point and it seemed like the smoke was not getting any worse!

We joined the trail and descended to Tuck Lake and down to Deception Pass. I always overestimate how quickly this descent goes, because the trail is actually quite steep and technical.

Down at Deception Pass, we had the choice to either return to the car for a nice easy day or continue on with our original plan. The new fire near US2 was obviously a concern, but we knew that the winds should blow it away from us. The smoke was otherwise supposed to improve throughout the afternoon. And from the Robin Lakes, it appeared that our planned route up the North Ridge and Daniel Glacier on Mt. Daniel would work. So we decided to continue.

We jogged over towards Marmot Lake and then hiked up towards Jade Lake. Along the way, we heard a boom, like thunder. I suspect it was thunder from the pyrocumulus cloud that had developed from the Bolt Creek Fire!

I had heard horror stories about the crowds and trash at Jade Lake, but it fortunately seemed cleaned up and there were not that many social trails and camps.

The climb up to Dip Top Gap holds a low angle glacier. It looks small from afar, but still has some meat to it. There was a section of bare ice that looked like it might be troublesome without traction from afar, but it actually was weirdly sticky, with plenty of rocks and features to help your footing.

Right as we reached Dip Top Gap, we ran into my housemate, “Costco Kim” with some friends backpacking. Shoutout to Alex for celebrating her 30th birthday!

Dip Top Gap has in impressive view of Pea Soup Lake, the Lynch Glacier, and Mt. Daniel. The wind was ripping through the gap. I can only imagine when the glacier covered this lake entirely!

People commonly travel to the right from here towards the outlet of Pea Soup Lake. This would join with the Alpine Lakes Crest Traverse by ascending the right side of the Lynch Glacier. But the snow finger looked a little steep for running shoes and no crampons, and the glacier is decently broken up by September, so we wanted to try our alternative “North Ridge” route. The only challenge would be getting around the left side of Pea Soup Lake.

The traverse started off easy enough, just classic loose kitty litter. But as we got further, we rounded blind corners with steep choss and cliffs beneath. I carefully led the group and scouted out our options. Travel was slow and communication was challenging with strong winds whipping sand in our faces.

At the crux section, I found a way across a steep sidehill with cliffs above and below. By sticking right beneath the upper cliff and using handholds there, we tenuously crossed the sidehill and some more scrambling finally brought us to easier terrain. This section took over an hour and was rather unpleasant. I cannot really recommend this option, but it does go at approximately class 4, although I think we need a choss rating to probably categorize it.

We were a bit gassed after such a cruxy section, but we could see shadows moving across the Daniel Glacier, so we knew we needed to move before the snow firmed up. So we all kicked it up a notch and began up the gentle north ridge. If the snow on the Daniel Glacier was too firm, I knew we could bail through a saddle to Peggy’s Pond.

We zoomed up the slabs towards the Daniel Glacier and gained the glacier in the middle. Fortunately, the snow was still soft enough to kick steps.

I love how prominent and massive the Daniel massif feels. It has the size of a volcano, set in the heart of the Alpine Lakes Wilderness.

At the ridge, we joined with the normal ascent route towards the true summit. The wind whipped by, chilling us on this hot day. Streaks of haze and smoke encircled us to the south, west, and north, but we seemed to be standing in a clear hole in the sky. It was a day that started with the lowest of expectations but brought us along on yet another magical adventure. I love this spot, this time of day, and this feeling.

I went ahead as we took our time descending, enjoying the muted sunset over the eastern mountains. The wind died down and it was incredibly peaceful.

We made good time on the way out, until it really got dark. We only had two headlamps for four people (pro tip – shine the light straight towards the ground, creating shadows in all directions that illuminate the trail enough for multiple people) so we just walked the last mile to the Cathedral Pass Trailhead and then another mile of road back to the Paddy Go Easy Trailhead.

When I woke up on this morning, I was very close to bailing. But I am so glad I came out because this ended up being an awesome day seeing new terrain, answering question marks on the map, and moving with some great people. A combination of experience, optimism, and luck squeaked out another wonderful day in the Alpine Lakes Wilderness!