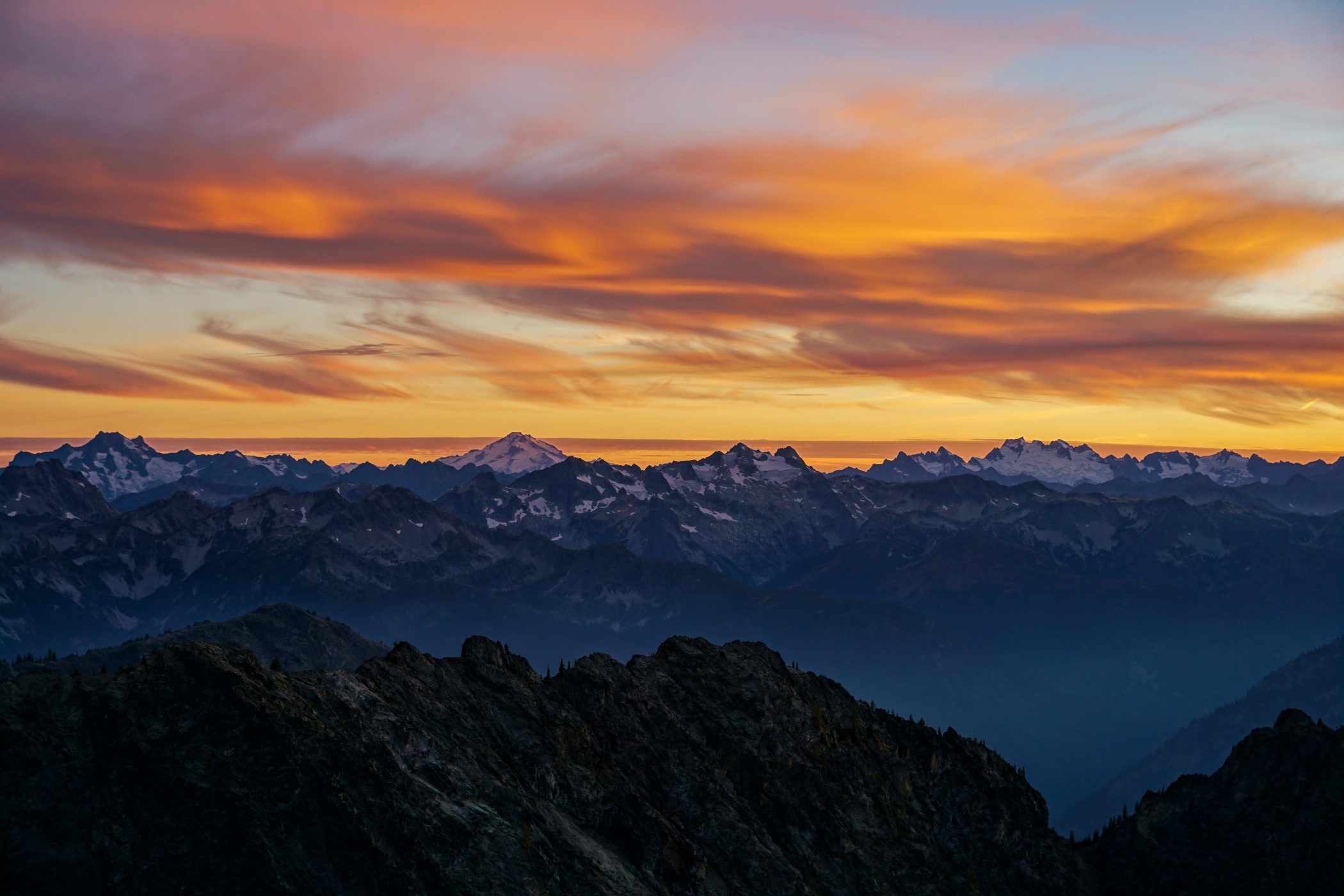 I love a particular blend of moving quickly in the mountains and moving slowly enough to take plenty of pictures. For a while, I have observed Wyatt (check out his photography), a more talented runner and photographer from the Skagit Valley. We began to develop mutual friends, so I thought I could convince him to go up to Highway 20 for a running-scrambling-photography weekend.

I was originally planning on just going up the valley from Blue Lake, but Wyatt suggested we try going directly up the long east ridge to the summit of Blue Lake Peak. We knew nothing about it and had done zero prep, but we figured we might as well give it a shot.

As we climbed out of the trees, the ridge was a bit sandy, and a mix of third class scrambling and easier walking. A steep headwall loomed in front of us and we knew this might be a show stopper.

Here at about 7400 ft, the peak steepened sharply. The rock looked climbable but pretty loose. We opted to traverse to the right hand skyline and see if there was an easier way up.

When I reached the ridge, I peered over a steep drop off to a gully beneath. Traversing was no longer viable. The only was was up. So Wyatt waited in a safe spot while I scrambled up a steepening knife edge. The rock was friable and lichen covered but solid enough. I would definitely describe it as fifth class. As I topped out on the pinnacle, I passed a rap anchor with fresh tat!

The tat got me concerned because usually that means that there is no easy way off of the feature, thus forcing a rappel. But I searched off the backside and found an exposed fourth class ramp that got me down to the saddle with the true summit, from which it would be an easy scramble. I breathed a sigh of relief and yelled over to Wyatt that he could continue. From my vantage, I was able to get some incredible photos of Wyatt scrambling.

Typically, I plan in great detail, almost to the point of removing any uncertainties. In a way, this felt so much more like a true, spontaneous adventure. Wyatt’s calm head while scrambling definitely impressed me.

A small pleasure plane buzzed around the spires as we scrambled up to the true summit, just as the sun was getting low. Perfect timing!

Smoke from nearby fires wafted through the valleys, creating incredible lighting and layers.

A good sunset in the mountains never really gets old. With soft clouds high above, hazy layers, and a sea of peaks, this was a pretty good one. Even if you see the same view hundreds of times, no two sunsets are the same. The sun sets in a different place and the light interacts in new ways that bring your eye to places you have never noticed.

My camera’s electronics have been malfunctioning lately, meaning I cannot operate in Manual mode or shoot in RAW or do anything really other than take photos in auto. Consequently, some of my photos came out a little weird, but overall, I am pretty happy with them.

Eventually, it was time to get down. We scrambled off the east side, which had some 3rd class and a tiny bit of 4th class, although we did not look too hard since we just wanted to get down. From there, we descended next to Cornice Peak and down towards the SEWS climber’s trail. We made it back to the trailhead in under an hour for a nice little evening saunter.

We chatted with some climbers in the parking lot before going to bed, excited for the big day ahead of us.