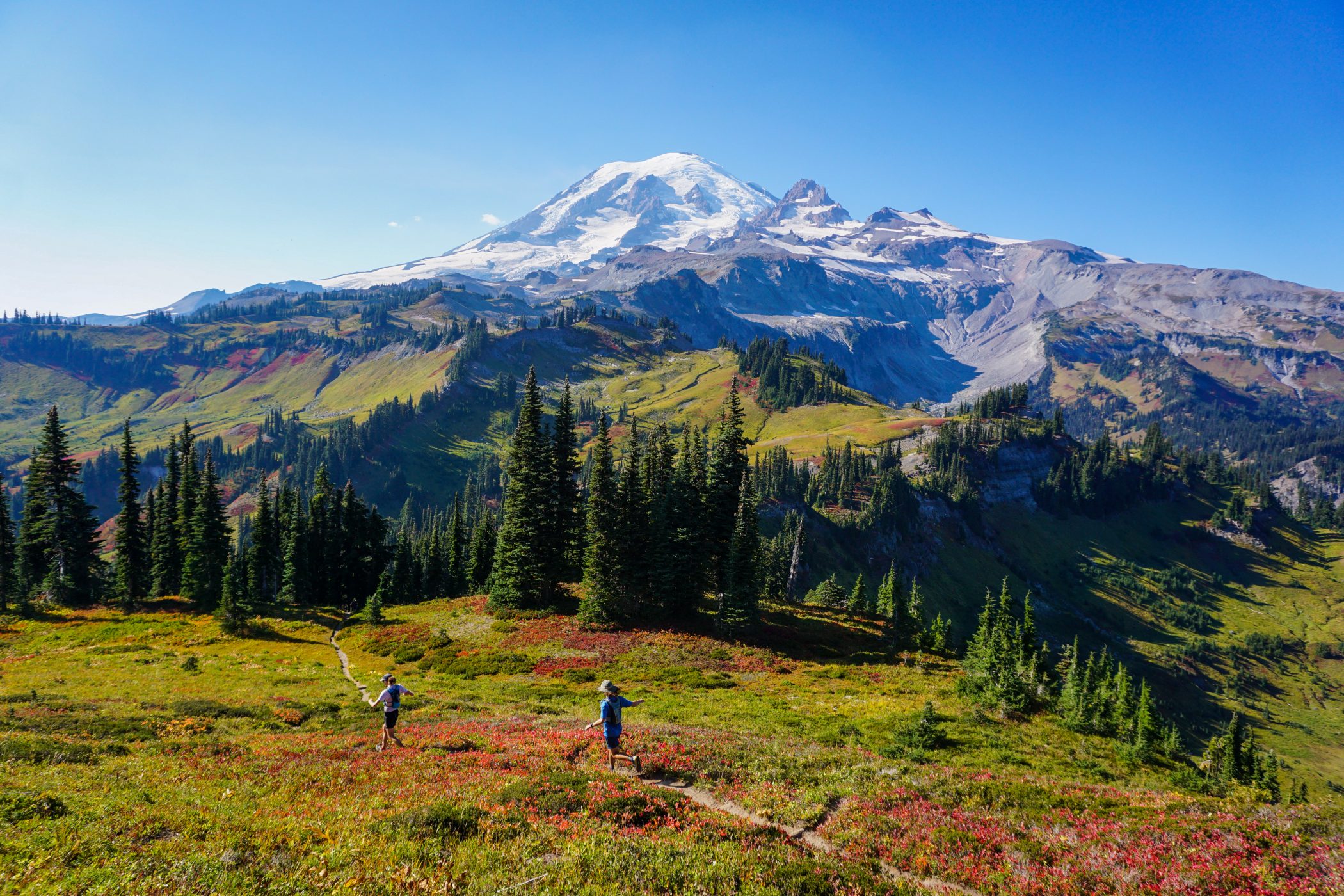 Another weekend, another splitter autumn day. With the late fall colors this year, I felt like the larches were still on their way. Logan and I debated our options before deciding to head down to Mount Rainier National Park to run on the east side of the park. It seemed like a smoke-free option and I knew there would be plentiful red meadows.

If you google “Eastside Loop Mount Rainier” you get actually two different routes. So when I suggested “Eastside Loop” to Logan, he asked which one? Then he asked, “por qué no los dos”? With a short car shuttle, we could run the PCT south from Chinook Pass and connect to the Wonderland and end at the Summerland Trailhead, abusing that free vert. It looked like a wonderful option!

Blake texted me Saturday afternoon, asking me what I was doing the next day. I told him “35 miles on trail in MRNP”, and he asked if it was half on trail or mostly on trail. He just did not believe that Logan and I would stick completely to trails. Manicured classics like the PCT and Wonderland? Unfathomable! He was in, and brought his fast buddy Sean.

We left a car at the Summerland Trailhead and drove up to Chinook Pass around sunrise. The colors were popping off from the start as we made our way around Naches Peak. It was going to be a great day!

We made a short detour to get that great view of Rainier in the morning light.

Down at Dewey Lake, we arrived at the perfect moment. Right as the sun kissed the surface of the lake, the low lying fog was excited and began to stream across the lake quickly. While we watched, we listened to coyotes howling and elk bugling. In just another few minutes, it was over.

This section of the PCT was extremely runnable and flat. We barely noticed the uphills and made good time. At one point, I talked to a wildlife watcher who had been watching elk mate down in a meadow below. Their calls were loud and stunning. I had never heard elk like this before!

Eventually, we reached the William O Douglas Trail and turned off for the long gradual descent to Highway 123. This descent was about 8 miles long and incredibly smooth and soft, although we did manage some epic wipeouts nonetheless.

It feels weird to cross a highway halfway through a long run. There were families about at Silver Falls, where we took a lunch break in the cool canyon.

The climb up the Cowlitz Divide Trail was rather slow and boring. The trail was definitely flat enough to run, but Logan and I do not do much of this running thing, so we walked. Blake was on the tail end of his recovery from his record setting run of Section J (Stevens to Snoqualmie) on the PCT, and Sean had just run the Timberline Trail around Mt. Hood, so we all had excuses. There was no hurry anyways, since we knew we would finish by dark.

After joining the Wonderland, there are still no views for a while. The climbs felt hot in the October heat, but this was one of only a few points all day that felt truly hot. Gradually, the views opened up and our spirits began to soar. At the top of Peak 5960, we took a break took soak in the scene before us.

The meadows were faded to a yellowish green, with sporadic splotches of bright red. Green fir trees felt artistically placed and of course the giant, omnipresent Big T and its glacial flanks loomed overhead. It felt like a painting.

The easy descent down to Indian Bar felt was truly wonderful. The powerful glacial stream has swept a mass of boulders into the valley, created a flood plain of boulders. I love spots like this, where you can feel the power of the glaciers and water, like the pulse of the landscape. With the bright colors and flowing water, this is when the mountains feel most alive to me.

We took the last climb towards Panhandle Gap slowly, soaking in the long rays of the afternoon. The weather, perfectly clear and warm, felt like summer, but the creeping shadows reminded us of the shorter fall days. I love this time of year, when the bugs are gone, the light is always soft, and the colors are vibrant. Fall in the high mountains is fleeting, although this year, it promises to stay a while, an autumn of wonder.

At Panhandle, we admired the little post glacial tarns of Summerland, which lay below us ironically on this autumn day. The landscape was completely transformed from late June, when Logan and I booted up snow in the dark, on our way to ski Little Tahoma and Big Tahoma in a single push. Now, only small glacial remnants remained and there were beautiful little silty tarns.

The trail was rocky and slow at first, but it became cruiser as we reached Fryingpan Creek and some of the most vibrant colors of the entire day, although the light was already getting dark. Then we flew down the final three miles of groomed trail back to the car.

Autumn in the mountains has a way of transforming the typical into beautiful, and the beautiful into the truly magical. This was yet another great day in the mountains with my friends, seeing new places and experiencing the changing seasons. While some may be yearning for snowfall and it would be nice to tamp out the smoke, I realize how special this season has been. You have to take what the mountains give you. They have given us some absolutely beautiful fall days this year, and for that, I am grateful.