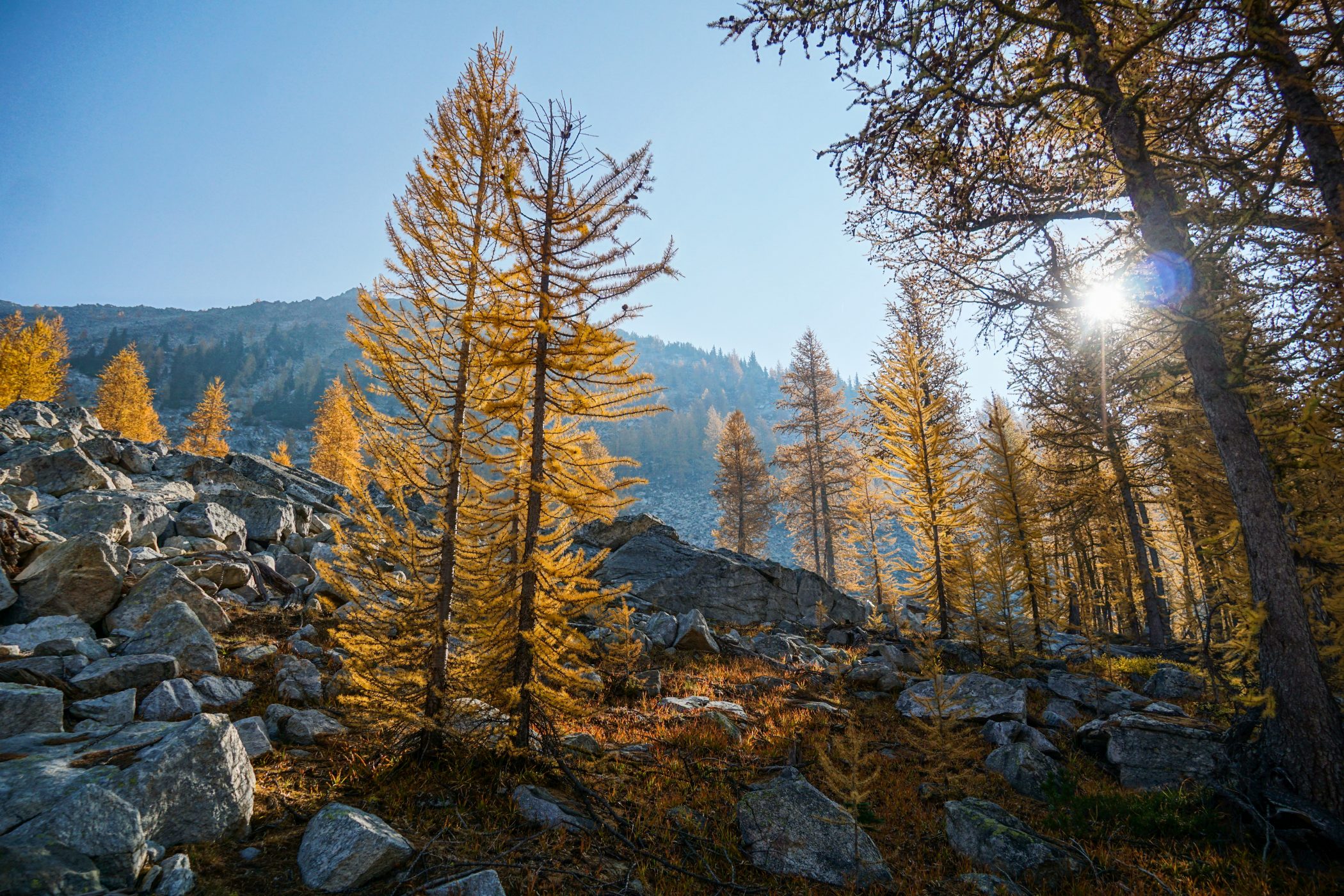 Credit to Rikki Ryno for the wonderful slogan.

For many years, I have enjoyed visiting the Chelan Sawtooth Range in the Eastern Cascades for its expansive meadows, high rocky ridges, and abundant larches. I have visited the southern end, around Switchback and Martin Peak, three separate times: a peak bagging excursion in 2016, a larch march in 2020, and as a part of the Chelan Summit Trail in 2021. I wanted to share one of my favorite zones with Kelly, so we returned again for the Golden Lakes Loop.

We got a late start, stopped for brunch at the excellent Sweetriver Bakery in Pateros, and got to the Crater Creek Trailhead close to noon. Well, not quite to the trailhead, because we had to park 2/10 of a mile down the road due to all the cars. This area is becoming more popular in the fall and is unique among high alpine zones in Washington in that it is open to motor bikes, mountain bikes, equestrians, and hikers.

We chose to get the more boring side of the loop done first and hiked towards Cooney Lake. A dozen or more motor bikes passed us and a few mountain bikes, but not as many as expected. Along the way, we ran into our friend Alex. She said she had encountered a traffic jam of about 70 people walking their bikes over Angel’s Staircase. It seemed there was a big bike club or organized outing? That explained why there were so many cars, but relatively few people actually encountered.

It takes about 8 miles before reaching the first larches. I love the vast glades of larches in the Chelan Sawtooth, complemented by red undergrowth, granite boulders, and rocky peaks. You get trees of all ages and sizes. This year, the mature trees are coning for the first time in my hiking lifetime. Some branches are basically covered in cones!

Larches only begin to cone when they are around 100 years old. Some of the larches that had cones were only about 10-15 feet tall, meaning these trees took a century to grow just a bit taller than us. The Chelan Sawtooth has some impressively large larches, many around 50-80 feet tall. These larches easily could be 500 years old. This forest service article talks more about the Lyall’s Larch.

Cooney Lake was pretty busy, so we walked around looking for a campsite. One couple (shoutout to Cooper and his partner) kindly encouraged us to come over to some open sites in the trees on the right side of the lake. They happened to also be from Issaquah, and we enjoyed a nice game of cribbage with them.

We also happened to place our camp right next to my friend Nastassia! We had a great evening playing games and socializing. Typically, my adventures take me to remote places, but it is also fun to socialize, see old friends, and make new ones.

Westy even passed by around dinner, on his way to Martin Peak and beyond. Dusk came early, but a full moon rose just after sunset.

The nights are long when backpacking at this time of year. The next morning rose with visible haze in the lake basin, but smoke usually settles in the valleys at night.

As we climbed up Angel’s Staircase, it felt ridiculously hot in the sun for an October morning. But luckily we found a breeze over the ridge. Kelly wanted to bag Switchback Peak since it was only 300 ft above the trail. So she bagged it and I triple bagged it.

The summit views were rather unremarkable from the top due to a wall of smoke to our west over Lake Chelan. At least the air was decent where we were specifically. It gradually got better during the day as air mixed vertically.

We rejoined the trail and dropped down the west side of Angel’s Staircase, seeing a few trail runners but remarkably few people. I love the meadows on the backside: big towering larches, lush meadows, and dark rocky hillsides. The springs were still running, even after an incredibly dry summer and fall.

The temperature gradient when passing from a roasting south facing basin to a cool north facing slope with frost on the ground was refreshing. I know I say it over and over, but I just love this time of year in the mountains.

We took the higher decommissioned trail to the saddle above Boiling Lake. My theory is that this is the old Chelan Summit Trail, since it obviously was graded and maintained at one point.

Once down at Boiling Lake, we ran into Sarina Pizzala, a great PNW photographer! It seemed that everyone was out this weekend enjoying the beautiful fall colors. And yet at the same time, it never felt overly crowded, although parking was a little strained. Personally, I do not subscribe to the philosophy that the presence of people in the mountains is universally a bad thing; rather, it made me happy to see so many people enjoying this part of the Cascades for the first time. I know that this area is increasing in popularity each year, especially in the fall, and I might contribute a small bit to that trend. But unlike the Enchantments, the Chelan Sawtooth is vast with many access points, so I hope people explore and spread out across the range. Outside of this zone, you can still go a weekend hardly seeing anyone. The greater Methow Valley has a lifetime of hiking trails, but many areas need attention and maintenance with expansive burn zones. There is no guarantee that use begets maintenance, but even just registering at the trailhead is important because that is how the forest service decides where to use its resources.

We had a nice, cool hike back to the car, stopping for smoothies and pizza at the Sweetriver Bakery in Pateros before long drive back to Issaquah. Another successful larch march in the books!