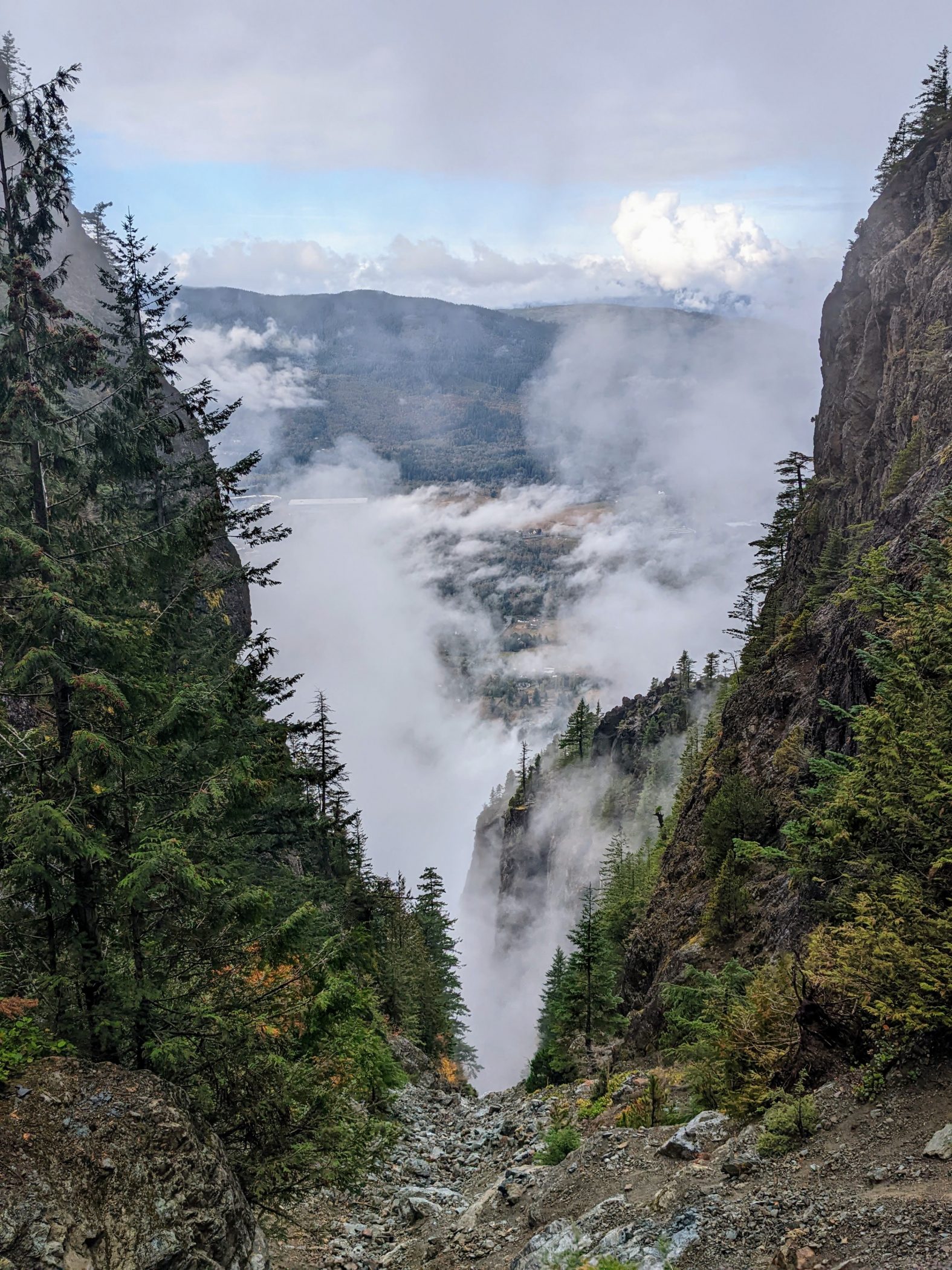 After a remarkable stretch of hot, dry, smoky conditions, the storm train has finally arrived and transformed the mountains into more typical late October conditions. Logan and I planned to get out for a half day and explore the legendary Black Canyon on the west side of Mt. Si. This feature is visible from Seattle and Bellevue, but few people ever venture to explore the steep walls of West Si. Hopefully someday we will ski it also!

As we started up the Little Si trail, we made a last minute decision to try the “Little Si Scramble Route” which goes up the south side. We found a pretty well defined trail that had some fun easy scrambling with one distinct “open book” move. The fog down in the valley made for a beautiful morning.

Atop Little Si, we could see across the forested slopes to the entrance to the black canyon in the clouds. From here, it looks like a narrow slot between cliffs.

We took the trail down to where it turns right and returns southward past World Wall. Here we left the trail and started moving through the wet bushes and undergrowth. It was more bush-walking than bushwhacking, but it was quite wet and hard to see your feet with all of the downed leaves. The logs were decaying quickly and we broke through quite a few logs.

We trended equal parts up and left, eventually popping out at the base of a boulder field after about 30 minutes of bushes. These boulders had the thickest bed of moss I have ever seen on a boulder field – plush and many inches thick. It made boulder hopping a bit of a mystery because you could not tell where the actual rocks were underneath.

We took this boulder field to its end and switched back to the forest on the left for a few minutes. This led us perfectly into the mouth of the canyon! Steep walls loomed above us and so we began the Black Canyon proper.

The canyon shows obvious signs of mega erosion. There are lots of rocks, most of them midsized and of questionable stability. We moved side by side to avoid rockfall. A large group would not do well in this feature. It is mostly class 2, but you have to be careful to avoid dislodging rocks.

It was pretty hard to believe that we were at just over 2000 ft. Steep jungly walls loomed around us and clouds swirled, but we could still hear I90 and see civilization out the narrow slot canyon below us. The Black Canyon is certainly an impressive feature!

At about 3000 ft, there is a fork in the canyon. The right fork looks enticing, but it likely cliffs out. Unfortunately, we never got a clean view through the fog. Instead, we kept left.

The canyon reaches an abrupt terminus at about 3500 ft. All in all, this feature is over 1500 ft long and quite steep. It might be longer than any couloir in the Snoqualmie Backcountry. When there is the next snowmagaeddon, the Black Canyon is high on my list to ski, along with Cable Line.

The terrain transitions dramatically in this mid elevation forest plateau. Unlike before the Black Canyon, there is absolutely no underbrush in this forest, save for a weird hole in the trees that houses a mystical, almost spiritual feeling bed of soft green moss. Logan commented that people must do some really weird drugs here.

We found some tarps and a shovel, evidence of a permanent camp up here. With the mist in the trees, we got serious spooky vibes and decided to move on up towards the north summit.

There was fresh snow above 4000 ft and near the north summit we broke out of the trees to an excellent view of the main summit.

It appeared we could take the north ridge to the summit of the haystack, avoiding the standard gully scramble. This was actually quality class 3 scrambling!

It had been nearly a decade since I last stood atop Si (senior year of high school?) and the first time I had scrambled it without snow in a while (I went up the gulley in winter a few times in college, but never finished topped out due to ice). With clouds breaking up all around us, it was a beautiful fall day.

We dropped down the gully, which was a little wet, then jogged down the Old Trail back to the Little Si Trailhead.

The “Phi Beta Si Little Big Linkup”, as Logan coined, was a super fun micro adventure close to home! I love mixing things up and bringing exploration to more mundane training trips. This route had a surprising amount of scrambling, a tolerable amount of schwack and choss, and good vibes all around. It was fun to tackle an iconic, but cliche peak from a new angle. Now I only need to do the elusive Mt. Si Glacier route!