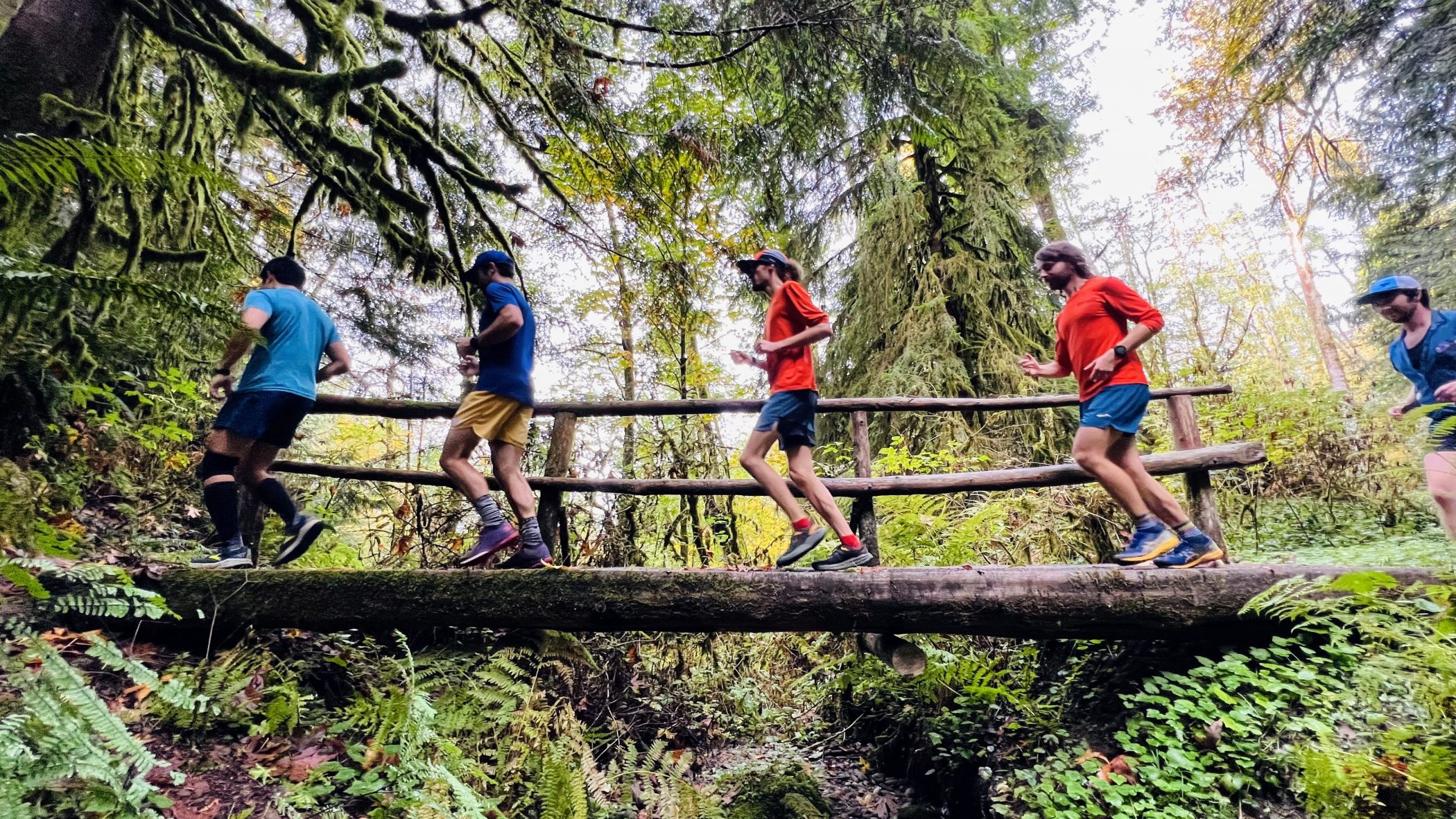 Last fall, Daniel, Blake, and I did a run over Tiger, Squak, and Cougar in Issaquah. At the summit of West Tiger #3, we talked to a man who told us about “Snake to Lake”: a grand run from Rattlesnake Lake to Lake Washington crossing the Issaquah Alps. While the idea sounded fun, it was most definitely the catchy name that hooked us. Next fall, it was going to happen.

Snake to Lake is remarkable because it is a 41 mile point to point route in the suburbs of Seattle, almost entirely on trail. The Issaquah Alps are not to be confused with the real Cascades. We would cross at least four major roads, so I figured that the most fun way to do this would be as a supported run, with aid stations at the major crossings: Rattletiger (highway 18), Squiger Pass (Issaquah Hobart Road), and Squagar Pass (highway 900). Fortunately, Kelly loves crewing and volunteered to meet us at each road crossing. The run is so local that she could go home between aid stations. Support is much more cost effective when you can fill out the group of runners, so I invited more than a dozen friends. Ultimately, we had nine different runners participate and four complete the entire run!

After meeting up at the Issaquah Transit Center, we took two cars out to the Rattlesnake Lake trailhead. We officially started our watches after using the bathrooms next to the lake.

The geology of Rattlesnake Ledge is very evident. During the last ice age, the ice sheet terminated here at the junction of the Cedar River Watershed. The incredible density of glacial erratics in the forest beneath Rattlesnake Ledge and the oddly shaped flat plateaus to the south suggest a glacial terminus. Rattlesnake Ledge itself may have been carved by the glaciers, which were up to 3000 feet thick in this area!

It was a chilly morning high on Rattlesnake, but we were just grateful that this was the one dry day all week! After nearly no rain for four months, the faucet turned on a week ago and the normal PNWet has returned. With snow above 4k, fall days like these are a perfect time to enjoy the vast trail network of the Issaquah Alps.

We took a one minute detour to bag the true summit of Rattlesnake Mountain. At 3,481 feet, this is the highest point in the entire Issaquah Alps. Interestingly, we would not bag a single other summit. We simply took the most efficient line, avoiding any single use mountain bike trails. To add summits would have added significant gain, but it would be an aesthetic variation.

The connector from Rattlesnake to East Tiger is definitely the least maintained section of this entire route. We followed some roads until the powerline clearcut dropped off into cliff-like brushy terrain. Here, I had heard of people getting around to the skier’s right side, but left looked better. After a short schwack, we found a climber’s trail that led us further down a few hundred feet to where we rejoined a logging road. This took us all the way to Highway 18 and the Raging River, although some sections were tricky to make it through the tunnel of brush without getting snagged by blackberry thorns.

Despite such a dry summer and early fall, the Raging River was surprisingly formidable, although I would not quite describe it as “raging”. I think about half the group ended up with wet feet as the boulder crossing was a bit slick. It was weird to cross a river directly under a highway bridge.

We met up with Kelly at the “Rattletiger Aid Station” – a pullout full of litter just south of where Highway 18 crosses the Raging River. The only other car here had someone living in it. I went all out for this event, buying all the typical aid station drinks and food. Ryan said goodbye to us here, as he is still recovering from the Chicago Marathon. Kelly drove him back to his car at Rattlesnake Lake.

The next section to connect to East Tiger was also a bit brushy and overgrown. We crossed Deep Creek on a logjam. Things could definitely be better marked and maintained on this Rattletiger connector.

We chose a route on the north side of East Tiger on roads and the Preston Railroad Grade Trail. I was well aware that I was the slowest in the group, although Chris just had COVID three weeks ago, so he hung back with me. 7:30 mile pace partway through a 40 mile run? Ouch. I don’t actually run much; I just sidehill, boulder hop, and bag vert. My hip flexors felt worked with 25 miles still to go.

This was actually my first run with Brigette and Kelsey. They had reached out about running together (although they are much too fast for me) in the past, but what really caught my eye was their short feature “Show us the Ropes“. I identified with them as half Asian and growing up in a culture where barriers to mountain sports might feel more cultural and stereotypical than physical or financial.

We used a few shared use trails, but only passed a few mountain bikers all day. The trails, with the exception of the Poo Poo Point Trail, were incredibly quiet for a beautiful fall day.

We met Kelly once again in the Sycamore neighborhood. At this point, we were just over 26.2 miles. At under 6 hours, I think it was technically my marathon PR!

Kelsey, Brigette, and Chris all decided to tap out after a full marathon. But Logan had arrived in a hideous denim top to bring fresh energy and Barrett joined the support crew. After a 30 minute break, five of us – Blake, Sean, Daniel, Logan, and me – departed for the Squak section. This section is less than six miles, so we left behind vests and water.

While jogging down the Cougar Squak connector trail, I was surprised to see a man waiting in a creek beneath the trail. It was Paul Winterstein, the execute director of Issaquah Alps Trails Club, the non profit advocacy group largely responsible for the preservation of all this forest land! I told him about our run crossing the entire Issaquah Alps the day before and he had been receiving updates from Kelly because he wanted to see us go by near his house!

We took a shorter break at the “Squagar Aid Station” before trudging up Cougar on our last section. I got stung by a bee on the Squak section and my leg had begun to swell up, but fortunately we had Benadryl at the aid station. The swelling would become much worse, even painful, the next day.

We went over Shy Bear Pass and down to the Red Town Trailhead, where we encountered the first bathroom in 35 miles. Most of us had never run Coal Creek before, but this small strip of greenery gave us a nearly complete trail run down to Lake Washington (see the “Save Coal Creek” project)! There were many sneaker ups on the way down, so Daniel, Blake, and Sean zoomed ahead while Logan hung back with me. It felt weird to have such a low heart rate but exhausted legs. Turns out running is really hard.

As we finally reached pavement, passing under I405 onto the paved Eastside trail, I realized that I had a shot to go sub 10 hours. But we had agreed that we could not stop our watches until we dunked our heads in Lake Washington. I rolled into Newport Beach Park and it was getting close, so I ran straight into the lake, shoes and all. The water stayed super shallow so eventually I just laid down my whole body horizontally in 2 feet of water and stopped my watch. 9:59:55! Seconds to spare!

Kelly (the real MVP), Barrett, Daniel, Blake, Sean, Logan and I stood on the shore of Lake Washington drying off and relaxing. The day had flown by. It was so much fun! While this run was a different variety than our typical wilderness adventures, it was such a splendid day celebrating friends and our local trails. Ever since moving to Issaquah, the Issaquah Alps have become a big part of my life. I think I speak for all local trail runners, hikers, and just casual enjoyers of the outdoors when I say that these trails are something to truly be grateful for.

2 thoughts on “Snake to Lake”