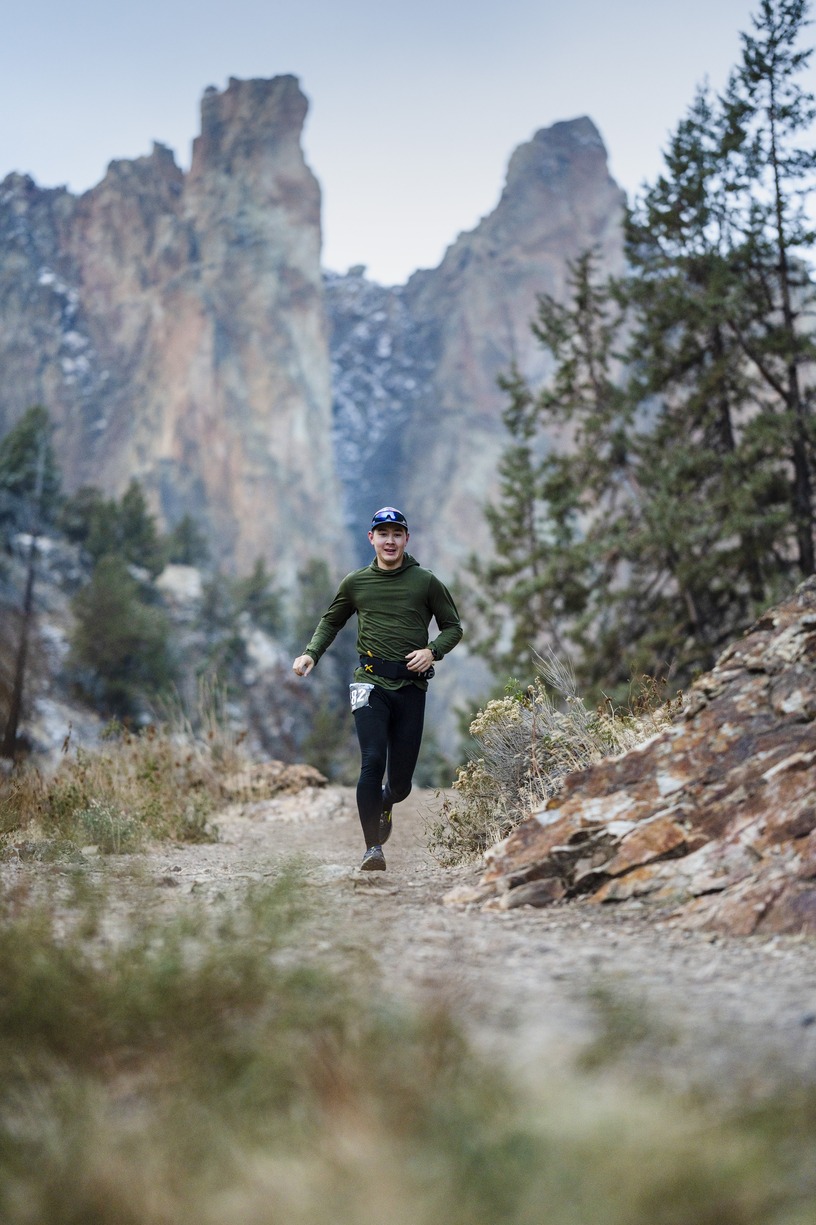 Whenever people ask me “do you run ultras?” I am not sure exactly how to respond. Quite a few times a year, I go out for distances greater than a marathon in the mountains. But I am hiking most of the time, not actually running. And I certainly do not race competitively.

I have my reasons for generally not racing ultras. It feels silly to pay a few hundred dollars to do something I could do myself. The effort expenditure on a race would set me back a while, so I would rather put that effort towards a wilderness mountain adventure. And here in the US, races can only occur where there is good access for aid stations, so the courses are usually rather uninspiring compared to real mountain runs. And to be honest, part of me got burnt out from racing in high school. I entered high school with a lot of promise but plateaued and just never got faster. It was disappointing.

In the last few years, I have been on the periphery of the race community. Lots of my friends were getting into ultras. Kelly does a few per year. Blake is practically unbeatable in the PNW scene. And Daniel has been steadily rising in the ranks. Volunteering at races is fun and the community is truly awesome. Daniel, Blake, and some other friends were planning on racing Run the Rock at Smith Rock in mid November, so I agreed to go along and try out this racing thing. There is only a narrow window from late October to mid November where I would even consider racing due to the general lack of alternative activities.

This race is advertised as a sunny, mild alternative to the wettest month of the year on the west side of the Cascades. But this year, it was the opposite. We left a beautiful sunny weekend at home for a windy snowstorm Saturday. The 50 mile conditions were gnarly, but my friends did super well! Blake of course won the 50 mile by a long shot, but Daniel surprised a lot of people with an impressive second place finish! Sean rounded out the top 5 while Barrett was the second female finisher. Our little team absolutely crushed it!

It felt weird to come down to Smith not to climb. Daniel and I spent a week climbing here last May while I was between jobs. But the rocks were beautiful with a light dusting of snow, and I figured that the slippery conditions would work to my advantage if nothing else.

We had friends spread out in three different Airbnbs in Redmond, but one had a hot tub, so that is where we convened in the evening. In a bizarre occurrence, I ended up eating burritos or burrito bowls for five out of six straight meals.

On Sunday morning, Logan dropped me off at the race start and left to go skiing at Bachelor. The 50k race began with the steep climb up Misery Ridge and descent down the other side. I think I got into an appropriate position early on and there was very little passing for the rest of the race.

I have never done a race like this where you actually run almost the entire time. I usually pick technical, steep routes in the mountains where there is lots of hiking mixed in. My main goal for this race was to average 10 min/mile elapsed pace. It seemed reasonable, but I really did not know how my body would hold up with so much flat running (only 4500 ft gain in the course).

The race participants spread out rather quickly and I spent most of the race by myself. After only 10 miles, I could tell my hip flexors were exhausted. I do not usually run so much gradual uphill and flat, so I think this wrecked them. But my energy levels were good and heart rate relatively low. I understand how to fuel and pace myself on long days in the mountains. I seemed to be just ahead of my goal 10 min/mile pace averaged over the ups and downs. I actually probably ate too much, slamming an entire hot warm tortilla at the second aid station. Whoops!

We spent much of the morning in a cold fog until finally climbing above the clouds on the backside of Gray Butte. In the dazzling sun and snow with a view of a dozen volcanoes, I actually started to enjoy myself for a few miles on a long descent. In general, I passed people on the downs, held my own on the climbs, and got destroyed on the flats – about what I expected.

My right hip flexor was cramping intermittently for the final 15 miles and my left knee started to hurt around mile 20. The final climb up from Skull Hollow really hurt, but I somehow managed to shuffle it and hike only a few sections. At the final aid station, they were out of the only Muir energy gel that tasted decent (aside – the bars and gels they had were absolutely awful) so I drank some pickle juice for the first time. For the next few miles, I felt both revived and on the edge of puking. I blame the pickle juice.

On the long traverse back into the park, I slowly gained on two people in front of me. As we dropped down the steep, loose Burma road, I was able to get over the cramping and pain and zoomed past them. Finally, some steepness!

I always love to complain about the 200 foot hill climbing back up to the parking lot after cragging, but it was even worse this time at the end of the race. I struggled into the finish line at 5:03:32. Given that the race was actually only 30.3 miles according to my watch, my elapsed pace was 10:02 min/mile. So close to my goal!

My friends were there to cheer me on at the finish, and we all waited for more friends to finish the 50k. I had to be very strategic about sitting down or lying down, because sometimes it was difficult to get back up. The burrito bowl provided by the race tasted pretty good, but I definitely was craving something else at this point.

I often hear about people having emotional experiences while racing ultras. What did I feel as I crossed the finish line? Mostly fatigue and pain, although the pain was never as acute as I remember the shorter races being. Did I catch the racing bug? Well I have not signed up for any more races, but I might do them occasionally. Mostly I learned what I had already suspected: I could be pretty decent at steep races with my downhill legs, but I need to do a lot more flat running to improve those muscles. And unfortunately, sidehilling does not translate to fast flat running in any way.

Eventually, we said goodbye to the others and Blake, Sean, Barrett, and I subjected our legs to a six hour car ride home. The best part of this weekend was all the friends and cheering. The racing community is so unique and positive. Everyone cheers on everyone, from the fastest to the slowest runners. I could see how it could become addicting to have these affirming, uplifting experiences and spend more time with these peculiar people who run in circles for long periods of time. It is a different sort of crazy than my typical crowd, but they are candid, kind, and inspiring. Thank you to Alpine Running for a fun weekend!