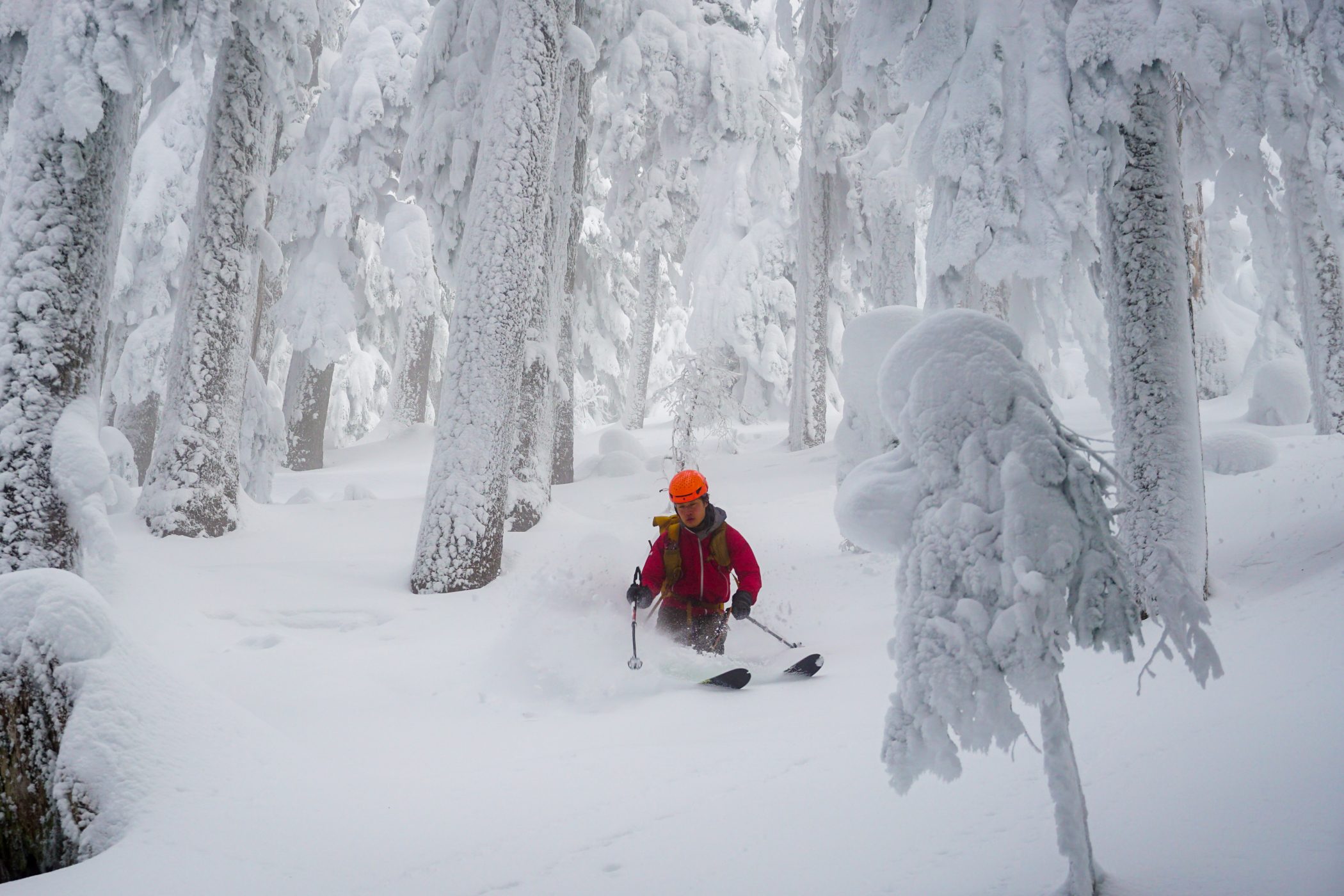 Although my first ski day did not come until after Thanksgiving, the beginning of this winter has been generous with cold temperatures and good powder. Since I have mostly had evenings or half days free, I have spent plenty of time skiing in bounds at Alpental before it opens. After some more great Alpental powder, Rio and and I decided to explore the backcountry.

My friends Dan, Madelynn, and Steve have all raved about some trees above Gold Creek and this intrigued us. So we parked at the Gold Creek Sno-Park (Sno-Park pass required!) and started touring up the trail towards Gold Creek Pond. Dan told us to take the first road off to the right. We saw it on a map, but did not see it in person and ended up blowing by it accidentally! After retracing our steps, we found a road cut, but hardly a road – it was covered in alder!

Old logging roads can be a mess of alder and this was just the beginning. We made slow progress weaving through the alder and two feet of fresh snow. I have never moved so slowly on a road.

We became concerned when we checked the Forest Service layer on Caltopo and it showed a higher road. Had we missed the correct road? So we dove into the tight trees and skinned upwards but found no other road. We made it all the way to 3200 ft before bailing back down to the previous road cut, turned back by tight bushes and a bottomless, baseless snowpack.

The road was not much of an improvement, but at least we were making slow progress. At times, my pole would go completely through the snowpack, as a few feet of powder sat atop alder and bushes beneath. The trailbreaking was exhausting. In the first two hours, we only gained 1,000 feet. I was close to bailing.

Finally, around 3600 ft, we entered the forest and were able to make consistent upward progress. The snow was still painfully deep, but at least we were heading up. Rio and I swapped trailbreaking duty, but we wished we had more bodies with us.

Around 4000 ft, we started a long rightward traverse up towards a saddle on the ridge. The terrain was still bushy at times and our skintrack reeked with indecisiveness and inefficiency. We got lured in by some sled tracks on yet another unmarked road and followed it way too far south before turning back north along the ridge.

We followed the ridge to the northeast, crossing some sled roads and peering down into Rocky Run. Dan raved about the steep, open terrain in Rocky Run, but the wind had obviously destroyed this slope so we stuck with our original plan. Finally, the ridge steepened and we skinned up to about 5300 ft beneath Dungeon Peak.

In all, this climb took us a little over 4 hours, although we had only gained a paltry 3000 ft. We were both quite fatigued. At certain points, I thought we were going to bail, so I was pretty proud of us making it up given the incredible amount of fresh snow and low coverage. We had basically the worst possible trailbreaking conditions but perservered.

When we were finally ready to ski, we dropped into surprisingly steep old growth trees. There were still a lot of downed trees visible, so we had to keep our speed under control. I would compare the skiing to Avalanche Mountain but without the open spots. Fortunately, the snow was still pretty decent.

There is a cliff band halfway down, but it was pretty easy to find a way through. Later in the season, these cliffs might become fully buried.

We took the run all the way down to 4000 ft, where we intersected our skin track. We both agreed that the skiing was good enough for another lap.

It was warming in the bright afternoon fog and the snow stuck to our skis, doubling their weight. I thought following our set skintrack would be easier the second time, but it did not feel that much easier. I guess it was just a high gravity day.

For our exit, we had a trick up our sleeves. There are a series of clearcuts above I90 clearly visible while driving by. I have always wanted to ski those, and they happened to drop us right back down to our car. So we skinned south along some sled roads before transitioning.

The initial glade was open and steep. Even though the snow was rapidly approaching the consistency of water, I still was able to ski with speed, arcing big turns and jumping off plentiful bumps. It was some of the most fun terrain I had found at Snoqualmie Pass!

As we dropped below 4000 ft, we entered a narrow gully that descended westward towards the Sno-Park. It looked increasingly bushy, but we were committed. At this point, the snow was completely WAP (wet ass powder). Turns were challenging, so we mostly just straightlined, bashed through alder, and then stopped. Rio called the gully the “Tube of Entanglement”.

After the tube, we still had to navigate some thinly covered forest. The trees were dripping on us heavily and we quickly became soaked. But somehow, we kept our skis on the entire way and popped out right next to our car! Mission accomplished!

As we took off our wet clothes and drove home, I chuckled at another adventure ski day. The alder frustrated us, the trailbreaking exhausted us, and the final descent thrashed us. But we explored some new terrain, got in a good workout, and even scored a few good turns. Snoqualmie Pass is off to a great start, and it is only December!