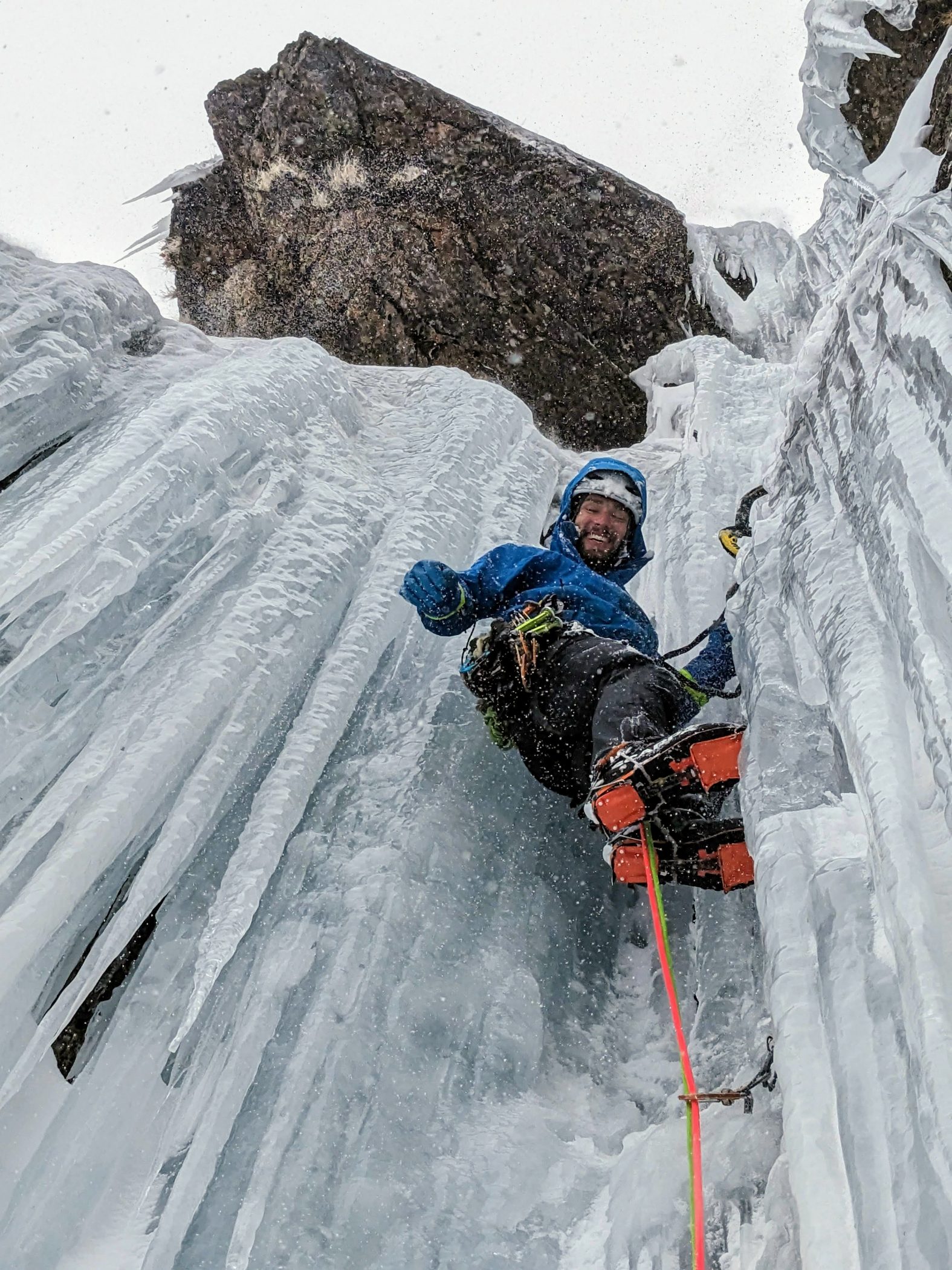 Whenever the legendary Wayne Wallace tells you to go climb something, you better listen up. Last year, Wayne told me and Michael that the Black Spider Wall on Mt. Hood was in incredible condition. So we drove down and had a great day climbing Arachnophobia Direct. This time, Wayne said that Flow Reversal, a multi pitch line on the cliffs above Source Lake in the Snoqualmie Backcountry, was fat!

Flow Reversal is a line I had heard of but never really noticed over dozens of trips to Source Lake, perhaps because it is not usually in great condition. Saturday was the ideal day to climb with calmer weather, but Michael was only free Sunday. It seemed like there would be some fresh snow and winds, but the avalanche danger was moderate and we felt that it was a reasonable objective.

Michael and I left Alpental and skinned up to Source Lake. Flow Reversal is visible on some cliffs to the right of Bryant Couloir, below Chair Peak. Although visibility was reduced by the falling flakes, we could make out the line. It seemed like the easiest approach would be to follow the skin track to Snow Lake Divide. We broke off around 4300 ft and traversed left to a snowfield above some cliffs. This led straight up towards the climb.

The final gully to the base of the climb was heavily loaded with spindrift. Even though it had only snowed about three inches overnight, there was well over a foot of fresh deposits in addition to many more feet of unconsolidated snow beneath. We were concerned about triggering a slab in the top foot or so of the snowpack, so we booted up the side of the feature instead. When progress became impossible, I broke out the shovel and demonstrated the “shovel technique”, excavating my way upwards to a comfortable cave at the base of the route.

Michael led the first pitch, which was not too steep but rather insecure. In classic Washington ice fashion, any sub-vertical ice had snow resting on top. The snow had ruined the ice, creating layered lenses of ice and snice. It can be hard to trust your tools in these conditions, so it is imperative to tread lightly and focus on keeping the weight on your feet.

Michael brought me up to nice belay ledge right beneath an incredible ice slot / chimney feature. Daggers poured down in all directions from the cliffs above us. It was a really unique feature, not just at Snoqualmie, but in all the ice climbing I have done.

There was a party of two nice gentlemen climbing behind us. They knew Michael from “The Barn”, a local dry tooling gym. Their leader was stoked out of his mind – absolutely euphoric. Their follower was climbing ice for his first time, getting the full experience with dramatic showers of spindrift. They made for a fun duo to chat with and I feel like we all managed the climb well together, avoiding hitting each other with falling chunks of ice.

Michael led up the icy corner, using a variety of chimney and stemming techniques. Since this section is vertical, the ice was quite good for screws and sticks. His clothes made sounds as they froze in place against the ice. “You can’t fall if you’re frozen to the ice,” he joked with me.

Michael took the pitch out of view and all the way up some more lower angled ice to the top of the climb. When it was my turn to follow, I squirmed my way up the ice chimney, using techniques that felt more like rock climbing than ice climbing. There were a few potent bouts of spindrift that filled my sunglasses, mouth, and nostrils. Eventually, I had to take off my sunglasses to see and finished the steeper climbing with them in between my teeth. It was some full value climbing!

When I reached Michael at the top, he was shivering. We were both surprisingly soaked and cold. He had led without a pack so did not have the luxury of a belay jacket while belaying me. For me, the cold was mostly driven by the fact my soft shell pants were soaked from all the spindrift and rubbing against snow and ice for so long.

We wasted no time getting down, rapping off a tree and over the cliff just climber’s left of the chimney pitch. One more V-thread rappel got us back down to our packs and out of the weather. We heard screams of joy from the other party, who was now in the money pitch.

Skiing down was a great relief, as we were finally able to generate some warmth. Visibility was challenging, but all the spindrift had filled in the slope beneath the climb and it skied very well. Michael said it was the best skiing he has ever had on an ice climbing objective.

Flow Reversal was a super impressive, unique climb. For its accessibility (1.5 hr approach), the quality of climbing is excellent. However, I am not sure how frequently it comes into such good shape. But part of the fun of ice climbing (at least in Washington) is exploring and checking out conditions. You might pass a climb a dozen times before it is finally ready. Patience makes the experience more rewarding in the end, or at least that is what I tell myself! In this case, I am grateful to Wayne for sharing his knowledge and stoke for the climbing around Washington. And thank you Michael for rope gunning me up another fun climb!