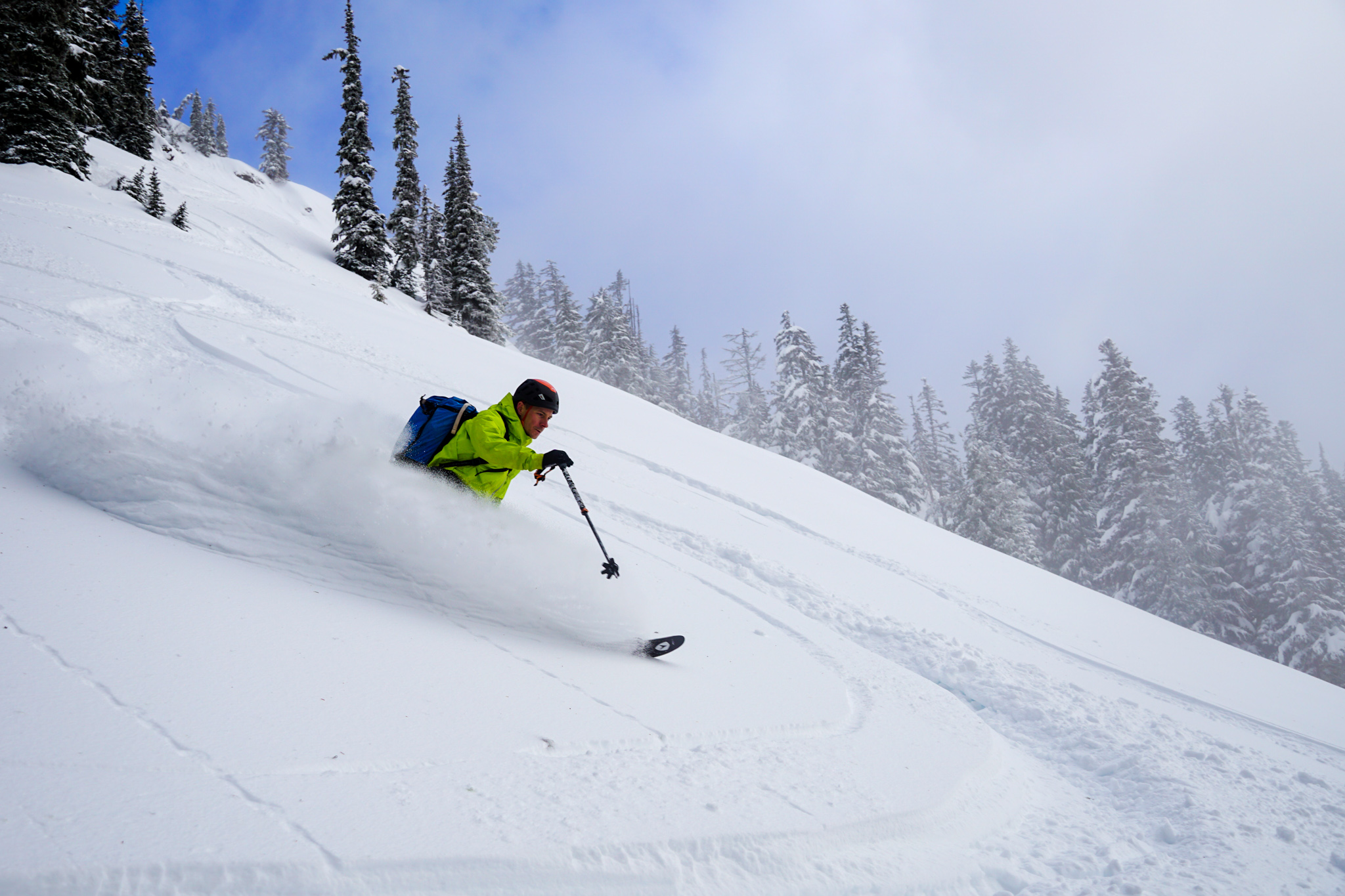 This ski season, I have prioritized adventure over racking up the most vert, skiing the best snow, or the coolest lines. Even with mostly half day windows of availability, I still have had plenty of fun micro adventures around Snoqualmie Pass. With some afternoon commitments, I decided to check out some glades above Gold Creek that I identified on satellite imagery. Honestly, exploring random tree zones like this almost excites me more than skiing some rad couloir. Why does no ski here? Why does everyone just go to Kendall Big Trees? These are the hard questions that need answering!

It is hard to find partners on a sunny weekend day when you have to be back at the car in the early afternoon, but Silvia and her partner Jack volunteered to join me. We started out on the Kendall Lakes road before veering off on some old logging roads headed up Gold Creek. We lost the road at times, climbed too much, and had to come down, before continuing further up valley. Our goal was to enter some SE facing glades that would take us up the ridge.

I had hoped that the forest would have well spaced old growth trees, and while there were many old growth trees left even after logging, there were also plenty of smaller ones growing under the forest canopy. It was tricky skinning, until suddenly we broke out of the denser trees into the most wonderfully spaced glades around 3300 ft. Not trees, but actual glades! I had never seen such nice glades at Snoqualmie Pass.

In spots with no tree cover, there were just a few inches of snow on top of a nasty rain crust. But in the open, there was plenty of soft powder. We debated skiing the glades, but decided to continue higher on the ridge.

I (and thousands of other skiers) had seen the first clean face that rises above Gold Creek – a 2500 ft south facing slope directly north of Gold Creek Pond that absolutely begs to be skied. You can see it while driving on I90 or skinning at Hyak. Strangely, it was not listed in the guidebook. This was our first objective.

The “Gold Creek Face”, as we called it, has a very cool position. The fall line is rather steep and continuous all the way to the broad, flat Gold Creek Valley. You can see all the ski areas and most notable peaks from this vantage. Fog floated through our field of view, but we were looking down upon probably thousands of people. We were hidden in plain sight.

The fresh snow overnight deposited about 5 inches of light powder on top of a sun crust. We knew it would ski pretty well, but it definitely was not bottomless. Silvia got first turns, leading us down the right side of the slope.

We eventually crossed back to the left side into some steep glades and finally steep old growth trees all the way to the bottom. It was a long, sustained run with varied terrain. In better snow, it would have been a blast. If I did it again, I would start on the left side of the face so I would not have to traverse across. You definitely don’t want to stay in the gut the whole way.

Down at the valley bottom, I said goodbye to Silvia and Jack. They headed further up valley to attempt to ski “Kendall Gold”, while I returned towards the nice glades we skinned through in the morning. I eventually found my skin track and slid my way up the hillside. The sun came out, turning the powder heavy and dense, but I did not mind because the scenery was beautiful and the vibes peaceful.

I took a few laps and decided to try to exit out the flat valley bottom. This was my first true “Gold Creek Experience”, and I learned that the flat open terrain on maps is actually undulating wetlands with tons of open creeks and marshes. It was reasonably easy to navigate, but slow and I was on a timeline! Kelly had signed me up for a private pole dancing class that afternoon and I was rapidly falling in danger of being late. My skis sank in the deep powder, with plenty of wet snow causing my tips to submarine. My hip flexors screamed as I went into Zone3, wandering through the forests and creeks before finally popping out back at my car! I made it, but only with minutes to spare.

Thank you to Silvia and Jack for humoring me and being willing to explore the less sexy lines of Snoqualmie. I am finding satisfaction this season in exploring the nooks and crannies of the backyard, even if it means less vertical and actual skiing. It reminds me of why I learned to ski in the first place – to explore the snowy mountains and find a good adventure. On this day, I succeeded on at least that front.