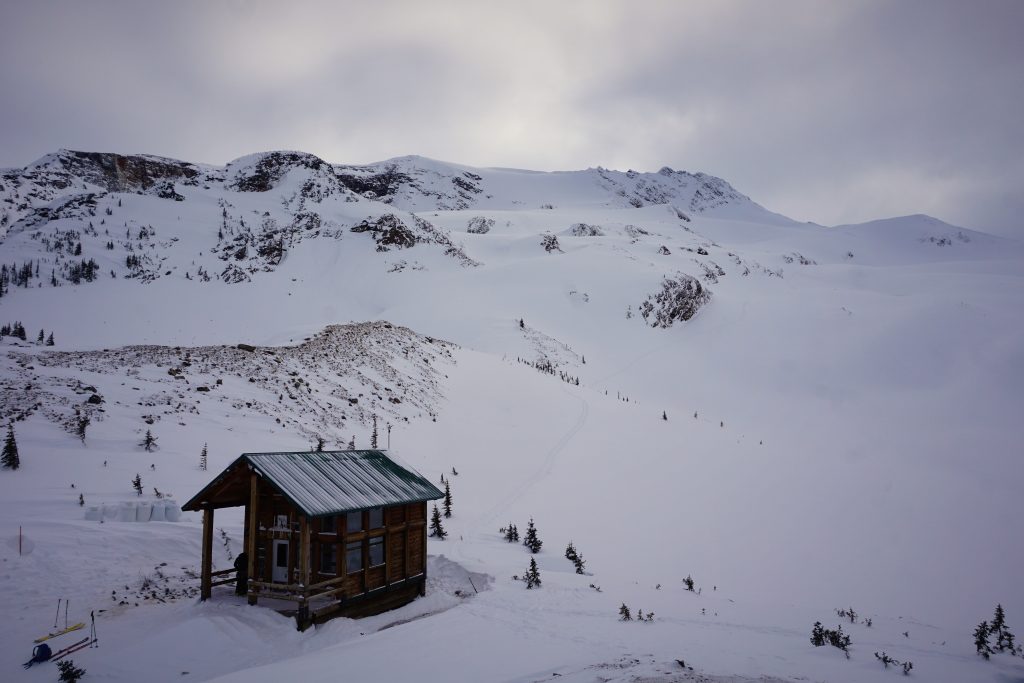 The night we arrived in Revelstoke, Brant was scouring the internet and found a surprise opening for the night of the 23rd for the Asulkan Hut, likely due to a cancellation. The Asulkan is one of the most famous and desirable backcountry huts in North America because of its nice amenities and picturesque location. Usually, you have to book over one year in advance. We quickly snagged the one night opening for our final backcountry adventure before returning home for Christmas!

Usually, people stay at the Asulkan Hut for many nights and use the entire first day for the approach, but we only had one night, so we got an early start like usual. The skin up the valley was pretty flat and views were limited due to a moderate snow coming down, but the creek was nice.

About 10 people passed us on their way out, meaning that the hut would likely be empty when we got there since the capacity was only 10. They were all raving about how good the skiing was, so that only increased our stoke. At the base of The Mousetrap, the skintrack petered out and we had to break trail through deep powder. However, once in the Tree Triangle, we regained an old skintrack. Logan and I were getting pretty tired at this point from the previous big day on McGill, but we pressed on. We eventually reached treeline and approached the hut just as the wind also picked up and chilled us, spiraling snow flurries all around.

We entered the hut for our lunch break. It was luxurious inside! There were bunks with mattresses upstairs, gas stoves, cookware, and a propane heater. Additionally, there were an assortment of maps, guidebooks, and board games to keep you occupied. After a good long break, we left our overnight gear behind and headed out for some afternoon turns.

Initially, we took two runs off to the skier’s right side of the tree triangle. It offered steep, open fall line skiing for a few hundred feet. The powder was blower and thigh deep, making the turns speedy and soft. We got some great face shots.

Above us, blue sky opened up but the snow continued to fall softly. For our final run of the afternoon, we took a full length run through the main part of the Tree Triangle. It was lower angle, featuring incredible glades and powder skiing. This was probably one of the most purely joyful ski runs of my life. As we skinned back up to the hut, the light was fading and we reached the hut minutes before it became difficult to see.

For dinner, we cooked some delicious homemade mac and cheese. For dessert, we had backcountry cherry cobbler. It was a delicious combination! Logan had been hesitant about hut trips previously, but now he was convinced that hut life was the way to go in the winter! We had a good time talking to some of the other skiers at the hut before going to bed early.

We woke up the next day before 6 am since we had lots of skiing still to do and then the long drive back to Seattle in the evening! Our hope was to get to the top of Youngs Peak and then ski either 7 Steps of Paradise or Forever Young. A quick peek outside revealed that the weather might indeed allow us to continue with our plan. Although there were high clouds, there was still good visibility and the moon was so bright on the snowy terrain that headlamps were hardly needed.

After breakfast, we put our skins back on and began the trek up towards Young’s Peak. It had been a while since I had done an alpine start like this. The winds were non existent and it was very peaceful out. We could see the lights of the highway thousands of feet below us. It was awesome to be in such high alpine terrain in the dead of winter.

Generally, the skinning was easy enough as the powder was not as deep up high and the slopes were moderate. At one point, we felt and heard the slope beneath us collapse. It was super low angle terrain, so we were safe, but we realized we had to be cognizant of wind-loaded slopes like that one. As we approached the steep headwall of Youngs, we stopped to put on basic sling harnesses since we were crossing a small glacier.

Brant led up through the headwall of Youngs Peak. It was steep (40 degrees), long (maybe 600 feet vertical), and intimidating. Luckily, it seemed somewhat windblown, leaving just a few inches of soft snow on top of a strong base. While many parties have to take off their skis and hike up this section, we were able to do long switchbacks across the face by skinning. The kick turns at this steepness were pretty difficult.

Finally, we crested the headwall and another 200 feet led us to the true summit. It had taken us about 3 hours from the hut. We were just entering the base of the clouds at this elevation, but we could still see some sprawling glaciers to the east and many impressive peaks within Glacier National Park of Canada. Amazingly, the wind was perfectly calm.

Given that snow conditions still seemed a little touchy, we opted to not even try to scout out the steep couloir Forever Young. Rather, we agreed to ski 7 Steps of Paradise, one of the 50 classic ski descents of North America, back down the summit headwall. The headwall was steep and a little chunky, but about as great snow as you could expect for a ski mountaineering descent!

After the steep headwall, we group skiied a few of the smaller “steps of Paradise”. On these less alpine slopes, the powder was deeper and super fun. We cruised and laughed our way through amazing open turns.

For our variation of 7 steps, we headed skier’s right of the large rock formation called the Pterodactyl. A few tighter turns deposited us into a big bowl. We ski cut this slope once before skiing the bowl one by one. When it was my turn, I skied aggressively and under control down the steep slopes. It was an awesome moment for me, feeling so powerful on a big ski descent like this, when I had just started skiing only two years ago!

At this point, we were near the base of the Tree Triangle and finished with our 3,000 ft descent off of Youngs Peak! We put our skins back on and began one last climb back to the Asulkan Hut.

Back at the hut, we packed up, washed our dishes, and said goodbye to this awesome place. We had one last fun run through the Tree Triangle. At the bottom, we hit some jumps. Brant alerted us he was “going to try something different”, as he attempted a backflip, losing a pole in the process. After 20 minutes of searching, we found it.

In typical ski touring fashion, the last few flat miles were an exercise in triceps muscles. but minimal ski acrobatics were actually required. Back in Revelstoke, we celebrated an awesome 5 days of ski touring with the Canadian classic Poutine, which is essentially french fries with cheese curds and gravy sauce. It was a delicious way to end an incredible trip in which each day simply got better and better. We made the most of less-than-ideal avalanche conditions and got to ski a great diversity of terrain near Rogers Pass, always in blower powder. Hopefully we will be back some day for more. Thanks for inviting us to your new home, Brant!