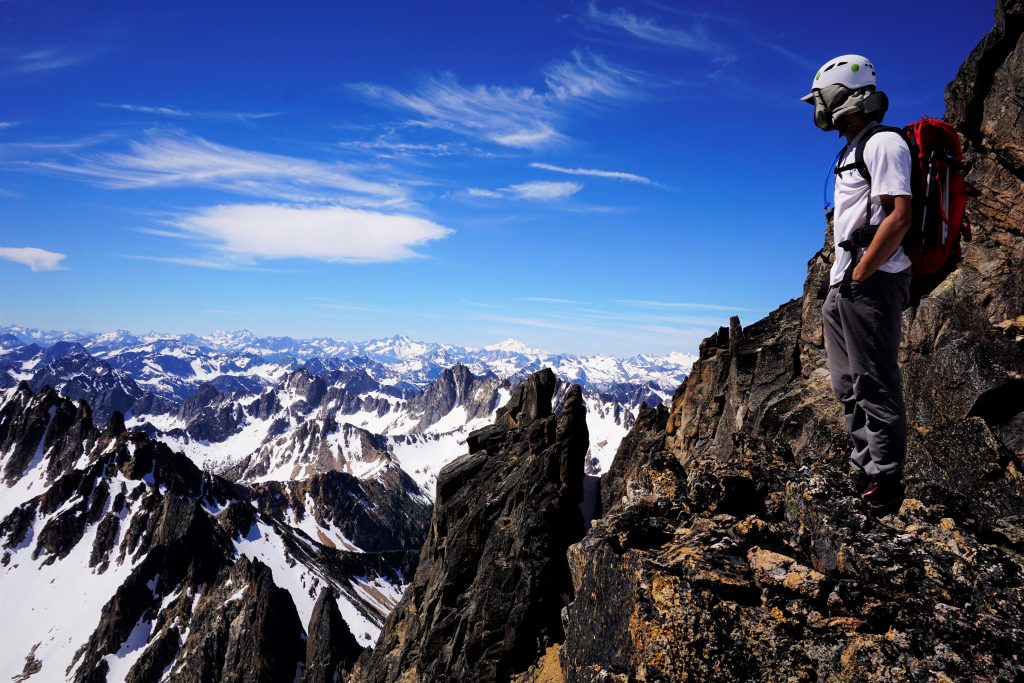 I think we’re almost there…

After climbing Liberty Bell the previous day, Daniel, Zeos, Kylie and I decided to wrap up the weekend with another Washington Pass classic, Silver Star Mountain. Silver Star dominates the eastern views from Washington Pass with its jagged ridgeline and spiky Wine Spires. Although very close to the road, it is actually a decent length trip so we got an early start.

The beginning of the climb is actually a steep loose descent to the river before the real climbing begins. Then it is thousands of feet of rather monotonous climbing up dry forest up a rather steep climber’s path. It was getting warm already and Kylie was regretting wearing her heavy insulated Nepals. Toasty.

Zeos started asking if we were halfway yet, but unfortunately we were not. Above the trees, we started going up a sandy gully. It was loose and Daniel and I were thankful we were wearing our La Sportiva Crossover 2.0 GTX with built-in gaiters to keep our feet clean and happy! Eventually we reached Burgundy Col, where the Mountaineers had set up camp, taking every last available campsite at the small pass. The spires around us were very impressive! We would have to return some other time when we were better at rock climbing.

Unfortunately, we had to inform Zeos that now we were going downhill a bunch and traversing on snow before continuing on to the summit. I don’t think we had communicated the nature of the route very well and he thought that the summit would be shortly after the col.

After the traverse, we began climbing up the mellow Silver Star Glacier. Late season, it becomes very icy but it was chill for us. At the top of the glacier, we moved onto rock and found a place to rest out of the sun.

From here, we were off the snow onto the scramble. People describe this scramble as anywhere from 3rd class to low 5th. We found it was somewhere in between. The true summit, however is very airy and definitely exposed 4th-low 5th class! It seems most people do not touch the true summit. We took turns making the bouldery moves, but Zeos chose to pass on it.

At nearly 9000 ft, the views from the summit of Silver Star were exceptional, definitely some of the best I’ve ever had in the Cascades. It gives direct views into the Pasayten and Sawtooth, intimate views of WA Pass area, and distant views of the rest of the North Cascades.

We hung out for a while on the summit, as it was one of the warm, bluebird summer days in the Cascades where you never want to head down. There were a few other parties up with us also in passing.

Eventually it was time to go down. We used a short handline for the toughest part of the scramble and then ran down the mushy snowfield in the afternoon heat. The climb back up to Burgundy Col was annoying, but then it was a quick loose descent back down to treeline. Somewhere in the trees, Zeos lost his ice ax (while it should have been in use) and Kylie and Zeos spent 45 minutes looking for it in the same small area before finally finding it. I think Daniel and I were tired and took a nap.

We got back to the car in the late afternoon, ready for some burgers and a long drive home. Silver Star was a beautiful, but rather straightforward climb. It was a good complement to a technical climb the day before. Thanks Daniel and Zeos for a fun weekend at Washington Pass!