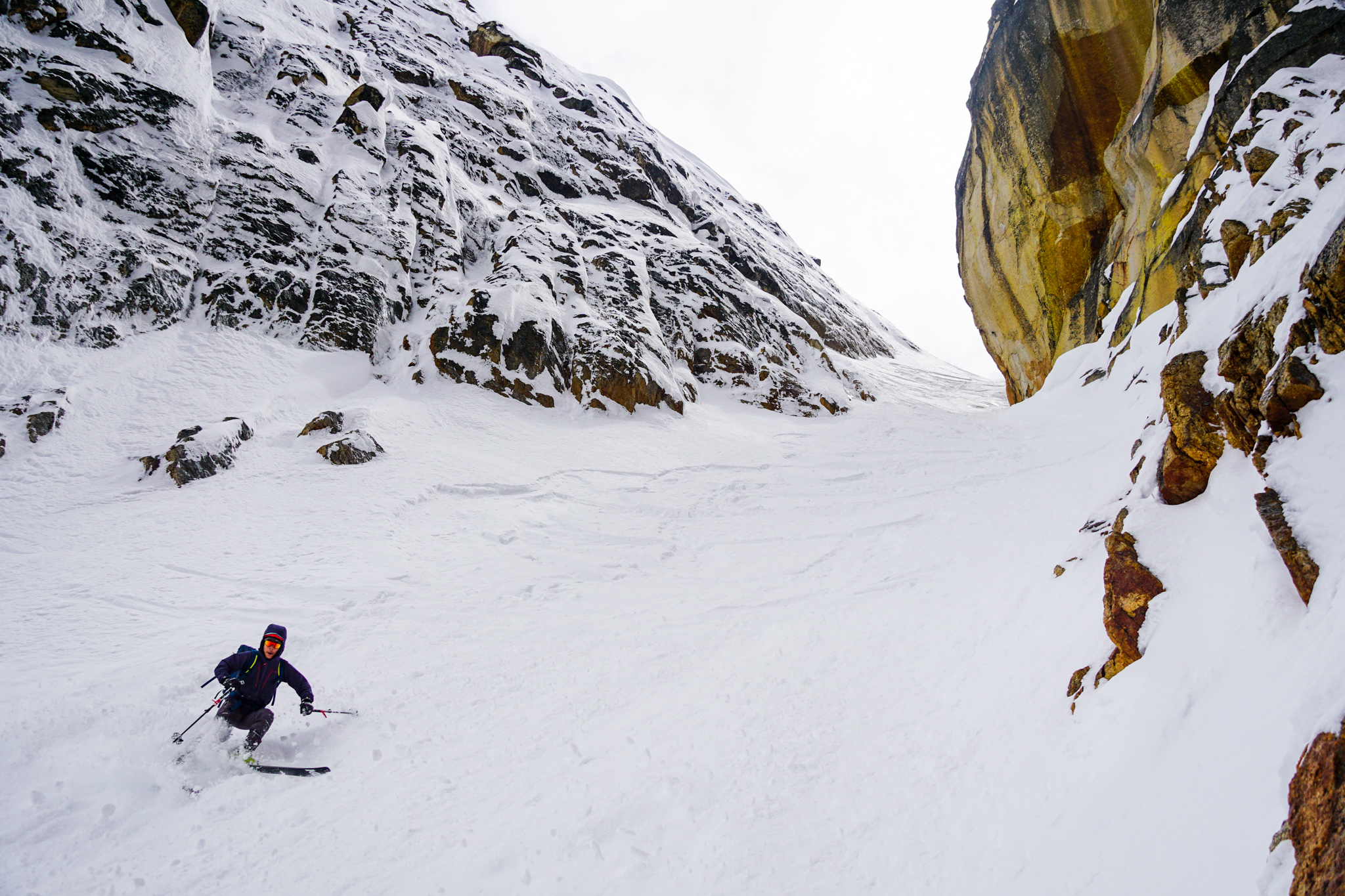 Kelly and I visited the Methow Valley for the weekend for a multi purpose weekend: to interview various folks for her podcast, rock climb, race Sun Mountain, and maybe even ski. Kelly’s 25k race was Sunday, so that left me Saturday to ski. The forecast was not very good, but KJ made the drive out to join me!

Like most of this season, the setup was less than ideal. Last year, we had a killer corn cycle right when WA Pass opened, but this year is cold and stormy. We knew there were a few inches of snow back on Wednesday with high winds and cold temperatures since then. Our forecast for Saturday looked okay in the morning but with intense thunderstorms and precipitation in the afternoon. So we decided to go back to the Cedar Creek drainage once again in hopes of corn.

We left the hairpin around 7 am and skinned up towards the low saddle between Big Kangaroo and Wallaby Peak. The crust was supportable as we cramponed up the slope, but we could tell it was unconsolidated beneath. Clouds were already drifting in from the east, but it was perfectly calm and a beautiful morning.

I went over this col last year, as it is the lowest entry into Cedar Creek, but last year it involved a hundred feet of annoying dry sand. This year, there was snow all the way to the pass on both sides. It seems the upper cols are incredibly filled in this year, allowing for easier travel over passes. Others have commented that they have not seen WA Pass so fat in late May in a long time.

On the other side, the east facing slope looked rather variable, with avy debris and chunder. But as we dropped in, we found actually decent old powder between the chunks. I kept waiting for the breakable crust, but then it turned to this curious consistency that is neither corn nor powder, yet skis well: the mythical corn-pow!

Somehow, we enjoyed 1500 ft of good skiing all the way to valley bottom! Our expectations for the day had already been exceeded!

We decided to skin up the gentle south slopes of the Cedar Creek bowl to the ridge just east of Big Kangaroo. The North Couloir of Big Kangaroo looked rather enticing, with two sets of tracks already down it. Could it be powder? I have eyed this line multiple times and actually climbed up it twice (once on our Life is Good Tour), but never found the right conditions for a descent.

Since we really liked the snow surface we had just skinned up, we opted to turn around and nab the 1500 ft south facing corn run. The upper 200 ft was a bit firm, but after that we enjoyed smooth cloudy corn turns to the bottom. Usually, you want sun to ripen the corn. But our snowpack is still so immature and unconsolidated that full sun would have turned the snow to mashed potatoes very quickly. Instead, the clouds and ambient temperatures allowed the surface to soften the perfect amount!

All day, it had looked stormy down valley to the east in the actual Methow Valley. Wafts of clouds moved up valley and sprinkled light snow on us. We decided it was time to make a move for the Kang Couloir before the weather got really spicy.

As we began booting up, graupel snow (resembles Dippin Dots Ice Cream) began to fall heavily from the sky. It slid off all the steep couloir walls and fed a stream in the couloir. At times, it felt like we were digging and swimming upstream. The dry snow was bottomless, and the wallowing was hard, waist deep. The last 50 ft took probably 15 minutes. If it was not for the old tracks of two other skiers, we are not sure if we would have made it up.

We topped out the line in a whiteout, but just on time, the clouds parted and graced us with visibility. After so many frustrations and misfortunes this season, on this day the mountains seemed to be asking for forgiveness with gift after gift. We took this gift of visibility and dropped in.

The constriction was a bit variable (we hypothesize that the overhung cliff drips water into the snow here, making it icy), but below that was nice dry, graupely snow. Was this late May or late January? We could hardly believe our luck.

At the bottom we turned around, admired the line, and within seconds watched clouds and snowflakes swallow the mountain once gain. This time it really started dumping as we broke trail through deep dry snow towards the lower saddle just north of Big Kangaroo. Snow was continuous on both sides of this col, something I had never seen before.

Visibility was terrible as we skied down the “Kangaroo Pouch”. There was avy debris all over, but it skied surprisingly smooth. We cut left into the “Kang Bang” proper, but it was covered in giant refrigerator sized avy blocks so we skied the trees to the left. It was puking wet snow at this point, but more corn pow turns awaited until it turned desperately grabby in the lower forest. We emerged at the hairpin in a wet blizzard, completely soaked and stoked!

As I promised in my last writing, I came into the day with the lowest of expectations. We just went out to explore and test the waters and take what the mountains gave us. I cannot remember a ski day that exceeded expectations more than this one, and that made it really special. Thank you, WA Pass, for another special day in this wonderful place!