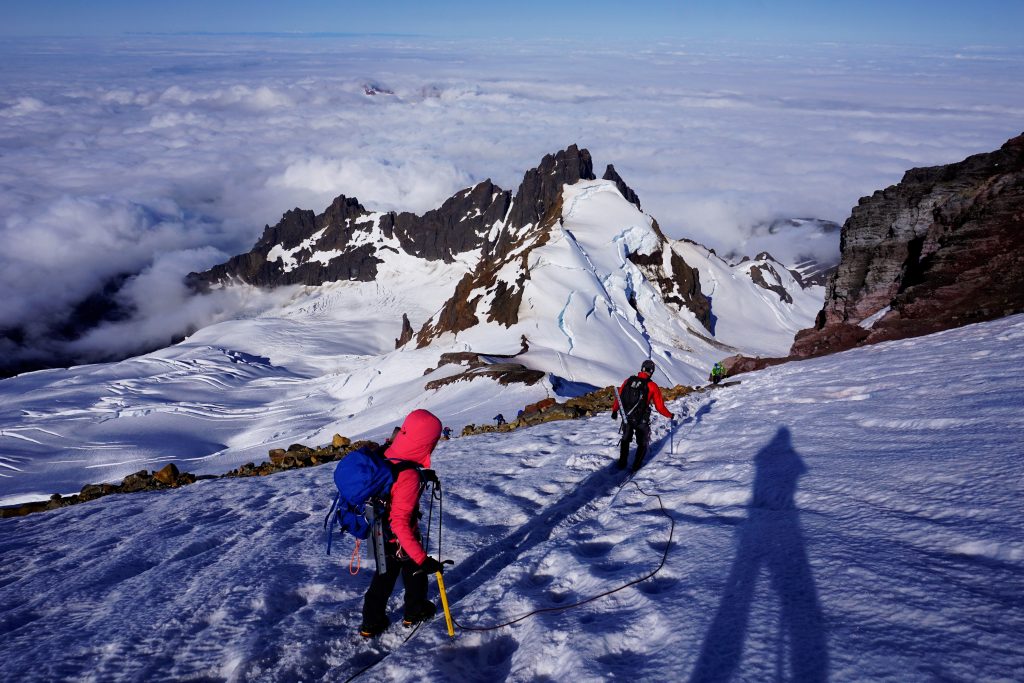 Climbing the Other Great Mountain

Jacob was spending the summer interning in Bellingham and asked me early on if I would be willing to take him up Shuksan or Baker. We had only really rock climbed together, but I knew he was super hard working and disciplined, so I told him we would climb one of the two, but first he had to get the gear, learn how to walk on snow, self arrest, and do crevasse rescue. So he went out every weekend and taught himself these skills. You can always count on Jacob!

Although Kylie and I had done quite a few climbs over the summer, we still had not gone up a volcano together. Climbing a PNW volcano is definitely a unique experience, so we decided that the three of us would climb Baker together via the standard Coleman-Deming Glacier route.

The weather forecast was not great for the first day, but at least partly sunny for the second day. When we got to the Heliotrope Ridge trailhead, it was raining pretty hard, but the rain tapered off as we reached the base of the Hogsback. The trail up the Hogsback was filled with beautiful wildflowers!

We eventually reached a flat area on the west side of the glacier. This is the usual high camp, with plenty of spots for tents. We found a good spot and set up our tent. In the afternoon, in between showers, we practice some crevasse rescue and even got our first taste of ice climbing on the walls of a moat!

In the evening, the clouds broke slightly, so we were hopeful for the next day. It was really a beautiful spot to camp.

We’re not sure what happened the next day, but I remember waking up and checking my phone at 4:30 am. We totally missed our 2 am alarm! Oh well, we did not think it really mattered too much since the summit push was not super huge. Still, we got ready quickly in the morning and then started hiking up the Coleman Glacier, zooming past the other groups.

There were so many rope teams that it was kind of difficult to pass at times. We walked on a few snow bridges, but not anything too sketchy. At the upper saddle, we entered the sun before continuing up the Roman Wall.

The rest of the climb was very straightforward, although the altitude always makes things difficult. It got super windy and cold high on the Roman Wall, as we were in the shade. My camera battery died, so we only got iPhone pictures on the summit!

The marine layer of clouds was very thick and we could see nothing but a sea of clouds, the tops of the Twin Sisters, and the summit pyramid of Shuksan. Good thing we decided to climb above 9k ft today!

On the way down, the clouds started to break up, which was nice.

Back at the saddle we took a snack break. We had so many peanut butter tortillas that we just started handing them out to the endless line of people also coming down. They were very happy. We could have made a good amount of money selling them!

As we got back down to camp, the marine layer really started to break up, making for a nice sunny day. The rolling clouds and filtered sunshine made the descent down the wildflower-filled Hogsback even more beautiful than the day before!

While the ascent of Coleman-Deming is pretty straightforward itself, Baker is such a beautiful mountain that any route is worthwhile. Next time, I think I would just do it as a day climb, but it was good to practice snow skills with Jacob and Kylie at a high camp. Hopefully, they got a unique experience on their first Cascade volcano!