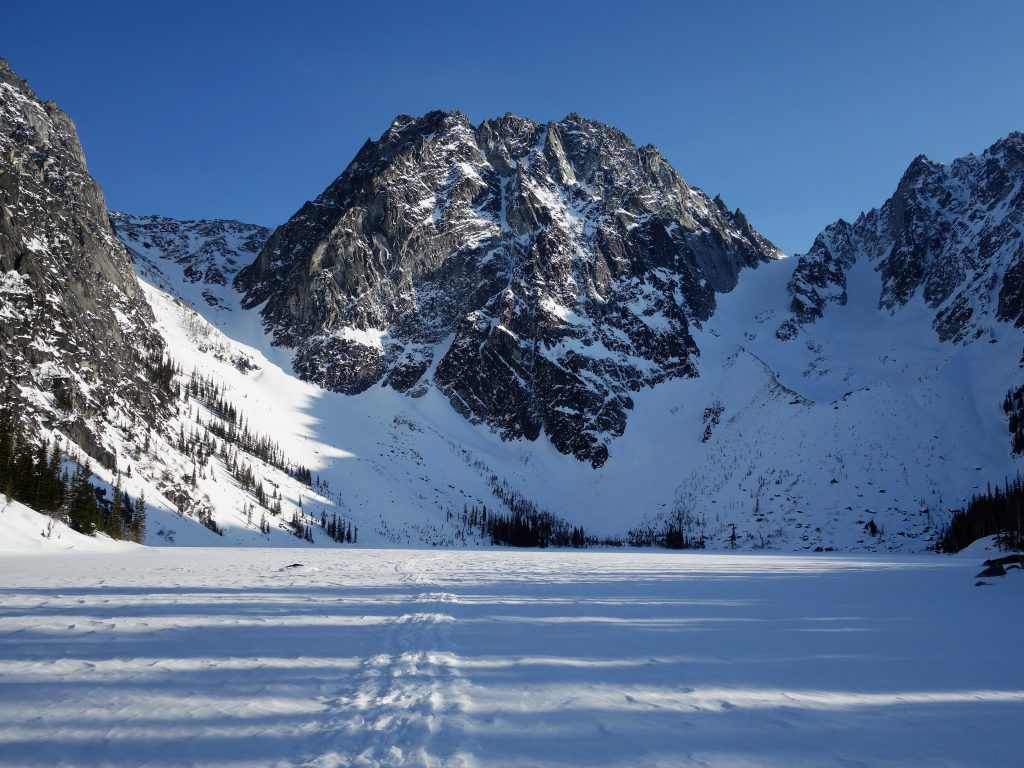 To Dream of Dragons

During my last year at Gonzaga, I made it a priority to learn to ice climb with the more accessible ice in the region. Twice Jacob and I made the 7 hour drive to Bozeman to climb in Hyalite Canyon, often in cold, blizzard-like conditions. Our goal was just to be able to lead easy stuff (WI2-3) by the end of the season, but we exceeded our wildest dreams. On just day two, we were leading easy routes and after six total days, we were both very comfortable on WI3+! Ice climbing was the fastest skill we had ever learned. As spring rolled around, we set our eyes on loftier goals. Triple Couloirs, the famous route up the north face of Dragontail Peak, was once a far-fetched dream, but now seemed within reach.

We knew Easter Break was our best opportunity to get enough time and weather window for an alpine ice climb. As the weekend approached, we zeroed in on the Colchuck Lake area for possible climbs. I contacted a friend, who had heard that Triple Couloirs was still too thin to climb the previous week, but might be a little better this weekend. Talking to Jacob, we decided to go into Colchuck Lake, take a look at Triple Couloirs, and climb the easier North Buttress Couloir of Colchuck as a backup.

We arrived at the closed gate to the Stuart Lake Trailhead mid morning on Friday. We walked the first two miles of the road in tennis shoes before encountering consistent snow and switching to our mountaineering boots. The postholing was annoying, but we chose not to bring traction. With heavy packs, we slowly made our way through the forest. On the way in, we met a party that was hiking out. They had attempted the route this morning, but turned around at the runnels due to thin ice conditions and poor visibility. Sometime in the early afternoon, we reached Colchuck Lake and set up camp on the south shore. We dug a little pit to set up our ultralight tarp tent. The weather was calm and mild, so it was a pleasant evening.

From here, the three couloirs were plainly visible. The crux of the route is moving from the first “hidden” couloir to the second couloir, which is in the middle of the face. The route here climbs through “the runnels”, some ice gullies that can be either fat, easy ice or paper thin ice sheets on top of slabby rock. The conditions are difficult to predict. From our camp, it appeared there was at least some ice over the runnels, but it did not look like a lot. We discussed our options and agreed that we would still try the route, but likely take an easier, more circuitous bypass of the runnels.

We awoke the next morning around 4 am and packed up. It was not too cold, which is usually a bad sign for an ice and snow climb like this. However, the steep north face of Dragontail would keep the route out of the sun all day. Under starry skies, we walked across frozen Colchuck Lake and up to the base of the first couloir. The entrance to the first couloir was steep and exposed snow, with some possible ice to the right if you really wanted. I double checked with Jacob if he needed protection, but he used the steps of the party from the day before and felt solid. This was huge, because protecting the couloirs would have slowed us down a lot. Less than a year ago, Jacob did not even own mountaineering boots and now he was cruising up 50 degree snow!

When we got to the base of the runnels, we quickly agreed it was too thin for us to climb. The ice looked barely a centimeter thick in most places.

Instead we continued up and right. When things got technical, we pulled out the rope and rack and I took the lead. It took some exploring, but I found a way through some cliffs, climbing some very fun WI2+ ice gully and then up more through rotten snow on top of slab. Eventually, I spotted a rappel anchor. To get there, Jacob had to simul climb beneath me some, making for an 80m pitch or so.

Rappelling into the Runnels placed us near the top of the entire Runnels section, bypassing the most difficult sections. Still, there was one tough looking chimney ahead of us. Jacob led this one. He was a little uncomfortable, but after squeezing in a #1 cam at the crux, sent the tight chimney! As he was setting up his belay at the top, one guy appeared below me. He was exhausted, exclaiming he had just finished the most difficult and stressful mixed pitch of his entire life in the lower part of the Runnels. Glad we did not go that way!

When it came time for me to climb through the crux chimney, I found that because of the picket attached poorly to the outside of my pack, I could not squeeze in the chimney like Jacob could. It was frustrating and awkward. Jacob and I had practiced ice climbing not mixed climbing, so using my crampons and tools on slabby granite felt insecure. Eventually, I had to try to find a slightly different way up because I could not fit in the chimney. I stuck more to the face, trusting my picks in super thin ice. Suddenly, one of my picks blew and I fell onto the rope! Good thing I was not on lead! I got up the second time, but still managed to catch the picket on some rock and send it flying down the snow beneath. Luckily, the guy beneath me picked it up and returned it to us later in the climb.

In the second couloir, the snow quality continued to deteriorate. We were the first to make it this far recently, possibly even in the entire calendar year! As a result, we had to wade through knee deep, loose sugar snow. It was quite exhausting. The view, however, was incredible. Colchuck Lake was right beneath us, straight down the couloir. All around us, there was a maze of granite gendarmes and towers. The immensity of the north face of Dragontail was amazing. It began to hit us why this was such a famous climb.

At the transition between the second and third couloirs we once again roped up and I took the lead. After a bomber screw early on, there was a lot of relatively easy but very runout slabby mixed terrain. Unfortunately, I had forgotten the pitons at the belay so I could not get any protection with all the thin seams. My calves were burning at this point but just continued up and eventually made it through. Even at the top, I struggled to find any belay anchor given the rotten snow and thin ice. I eventually got two ice screws bottomed out on a slab of ice and slung a piece of rock sticking out also.

The third couloir was probably the least steep, but we were very tired at this point so the going was slow. It actually had a very nice, thick WI2 step of ice, which we soloed easily. Finally, we crested the couloir and got a view of the summit. We had finished the route!

At the summit, we gained the familiar view of the Enchantments, Stuart Range, and greater Alpine Lakes Wilderness area.

Above the Snow Creek Glacier, I stopped and let Jacob descend first through the more avalanche prone slopes. As he approached Aasgard Pass, I ran down the slopes to catch up to him.

I managed to catch him right before he went the wrong (skier’s left) way down Aasgard. Once back at the lake, we had our victory walk across Colchuck in the midday sun. Now the weekend, there were more campers arriving. Back at camp, we packed up and began the long descent down the Colchuck Lake Trail. Changing into our trail shoes two miles before the car was a great welcome. We arrived back at the car before sunset. Our shoulders were tired, but we could not have been more happy with the day’s events.

In great weather we climbed a Cascade classic, a route that just a few months ago was unthinkable! Triple Couloirs is definitely one of my proudest climbs. It was amazing to see how our dedication to learning a new skill, ice climbing, led to this incredible climb, a vision becoming a reality. That is one of the things I love about alpine climbing: analyzing what improvements are needed for a goal, putting in the work, and reaping the benefits.