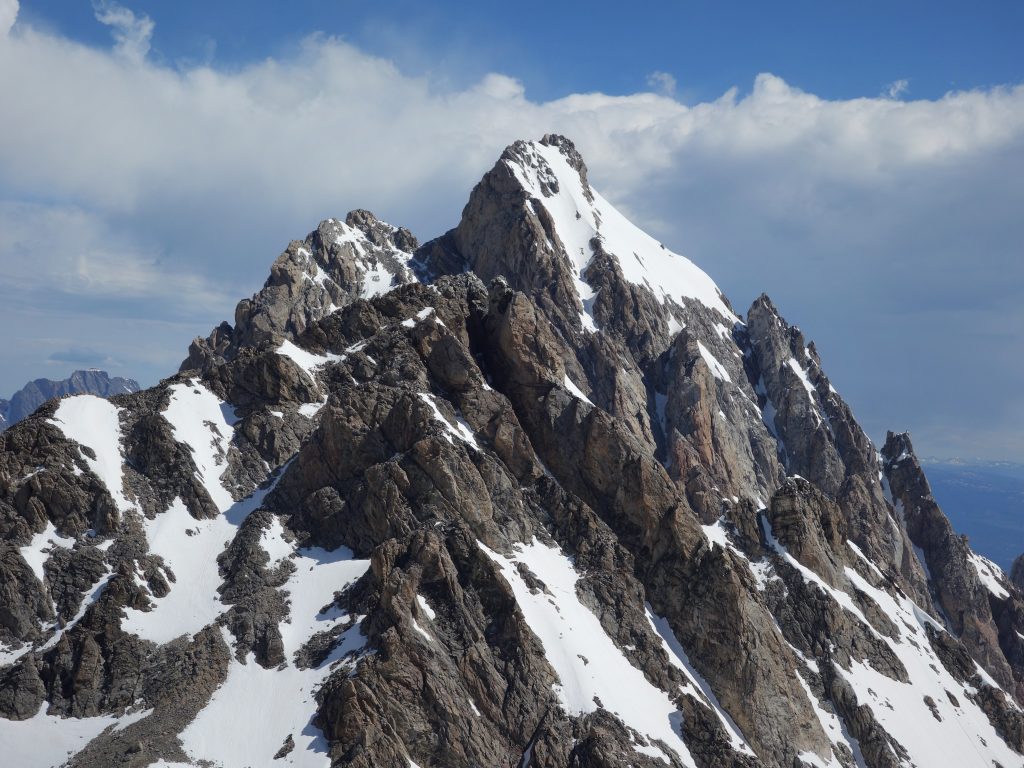 Since Kylie was still feeling tired after our five day trip to ski Gannet Peak, I decided to ski Middle and South Teton by myself. I left from the Lupine Meadows trailhead around 4 am, hiking up with some other guys who were also planning on climbing Middle Teton, but without skis. The switchbacks were quite a nice grade on this trail and pretty quickly I reached the turnoff to Garnet Canyon. Around 9000 ft, I entered the canyon and found a near perfect transition from hiking to snow. Here I put on my boots and skis. It was the complete opposite of the Gannet trip, where we spent a whole day in terrain that was too mushy to walk and too rocky/dirty to skin.

There was this incredible black dike straight up the face of Middle Teton. One guy told me there is a rock climbing route up it. I imagine it would have pretty simple route finding.

Going up the south fork of Garnet Canyon, I alternated between booting and skinning as the snow was pretty firm. The weather was cool and undecided. At one point it started spitting hail for a few minutes. When I turned around, all the other climbers had disappeared. I guess they did not want to deal with any foul weather, but it only improved from there.

As I climbed in the canyon, I got some great views of Middle and South Teton. Middle Teton has many impressive looking couloirs, but I knew that for the easiest ascent route, I was to continue all the way to the saddle before heading up Middle.

Eventually I reached the saddle and headed up to the right. The couloir narrowed pretty quickly so I left my skis behind to scramble the rest.

The scramble was maybe 500 ft long and pretty straightforward, but a little interesting as I had not done much scrambling in ski boots before. The summit was cold and windy but had great views of the Grand Teton.

I downclimbed to my skis and then skiied a short bit down towards the saddle. The snow was pretty prime, actually getting a little heavy. Unfortunately I snapped a pole when I got my skis and poles crossed at one point, but these were cheap poles not meant for skiing, so alas.

From there, I chose to mostly boot to the summit of Middle Teton because it required mostly climbing over scree and only a short section of snow. I managed to get this selfie by placing the camera straight on the snow with a timer.

Some more class 3ish scrambling brought me to the summit of South Teton. By this time the weather had improved and it was warming up nicely.

From a few hundred feet beneath the summit, I was able to ski pretty continuously down Garnet Canyon. The upper turns were great corn, but it got a little heavier as I descended. I stayed high up under Middle Teton, allowing me to later descend Cave Couloir, a fun little run beneath Middle Teton.

When I got back to my running shoes, I found that once again they had been munched on by some rodent (just like on Gannet)! Apparently they are attracted to the sweat or human odors our feet have. On the hike down, my skis brought a lot of smiles to casual day hikers. They shared the stoke of skiing, maybe just not the same desire to hike up to get those turns, but ski mountaineering is definitely not for everyone. Sometimes I wonder if I’m even cut out for it.

It was around 1 pm when I got back to the car. Not bad for a half day!