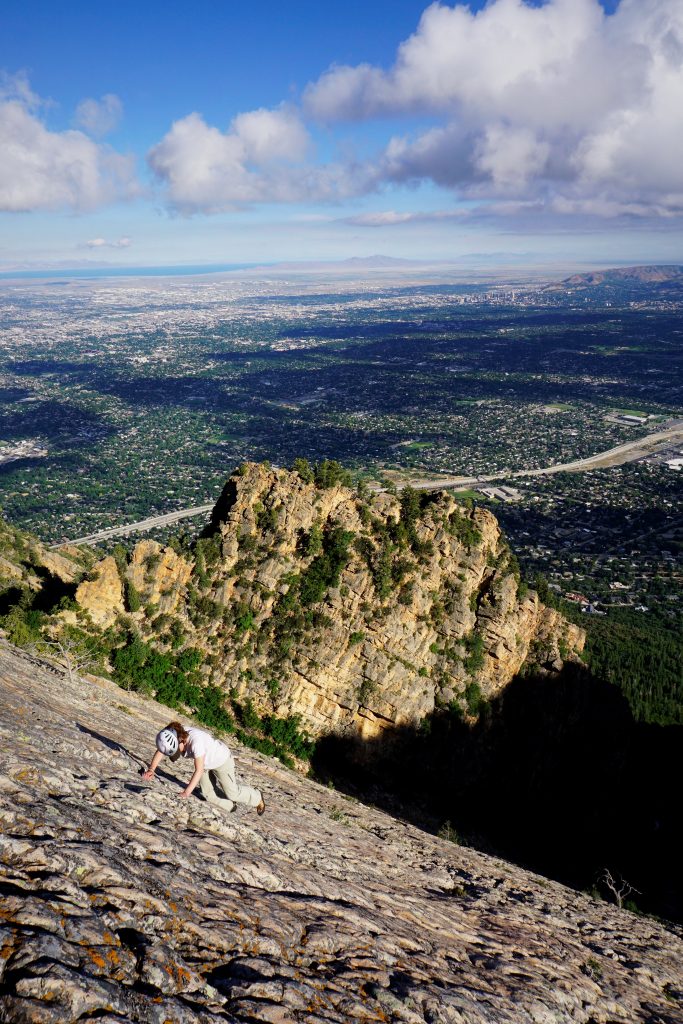 In the land where speed and accessibility is king, Mt. Olympus reigns supreme. The West Slabs loom over downtown Salt Lake, a 1500 ft tall, 500 ft wide monolithic wall that looks steep and imposing from the city. It seems to rise straight out of some of the upper neighborhoods and in fact can be done car-to-car is less than three hours. I think Boulder, CO (flatirons) might be the only other major city in the States where you can go solo 1500 ft of slab before breakfast and get into work by 10 am.

The approach started by parking the old, poor van in a very wealthy neighborhood in the foothills overlooking Salt Lake. After following a well maintained trail for 20 minutes, we hiked up a dry stream bed into a steep, deepening canyon. There was actual a small, icy snowfield in a canyon constriction that we had to cross because of all the snow that must avalanche down the west slabs and the persistent shade, even in the summer. It reminded me of how the Big Four Ice Caves in WA form so low.

At the base of the route, we switched into rock climbing shoes. We brought a short rope, but only intended on using it if one of us needed a short little belay. Despite the monolithic appearance from the city, the face actually had many seams and rest spots. The climbing felt mostly 4th class and low 5th and not nearly as exposed as we had expected. For those who do not want to free solo, there are enough gear placements and big fat bolts at belay stations (I think over 15 of them!).

Higher up, the face got wider and entered the sun and the angle relaxed a little. The rock quality was great! It was a ton of fun rambling up the slabs and there were good break spots to rest our calves. We began to get a full view of Salt Lake City and the actual Great Salt Lake!

The last few hundred feet were easier through broken up terrain. One guy passed us, the only one we would see the entire time! He had earbuds in and was flying up, typical Salt Lake speedster.

As we had read, the descent gully kinda sucked. It is mostly 4th class, but kinda loose and often covered in sand. Kylie actually put her climbing shoes back on for some of it, but I stayed in approach shoes. There were rappel anchors, but we had only brought a 30m rope and did not want to use them. In total, going up took us 3 hours, but it also took us three hours to get back to the car because of the annoying descent. Still, a great start to the day with plenty of time left to hit some crags in Little Cottonwood Canyon.