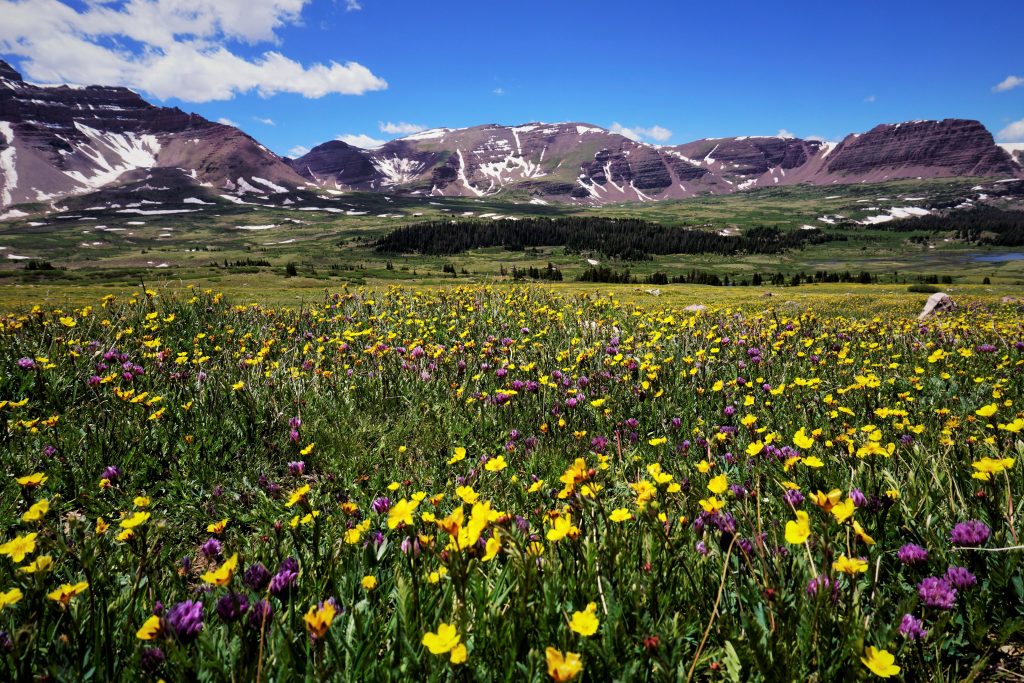 Pulling up to the China Meadows Campground trail head the night before, we were excited to see a restroom and picnic table to guarantee pancakes in the morning.

The Unitas are some of the strangest mountains we have ever seen.  The terrain is big and flat.  Flat meadows and flat mountains.  Our objective was to link a backpacking loop that started in China Meadows, moved into Henry Forks Meadow, topped the summit of Kings Peak, passed by Red Castle, and then linked up back to the trail head.  We finished the trip in about a day and half.

In the morning, we started our trip off walking along the flat creek path slowly gaining elevation.  There were some massive carins marking the path, like three foot tall piles of rocks.  They probably show even in the winter snow.  We finally started to descend into the famous Henry Forks Basin.

At this point, the camera finally came out.  Above the tree line we could see the Gunsight Pass we were headed for in the distance.  However, we had to first cross the nice, flowered meadows.

It took longer than we would have guessed to cross through Henry’s Basin.  The meadows were so big! We ran into someone running King’s Peak in a day from the Henry Fork’s Trailhead.  The trails had clearly been heavily trafficked and are a popular equestrian destination.  Sometimes there would be four deep, muddied, trenches cut out as a foot trail at a time.

When we passed over Gunsight Pass, there was an amazing long switch back that cut far to the right and then finished on top of the pass.  It was crazy long!

We skirted along Painter’s basin with our goal on King’s Peak.  It looked even bigger than Henry Forks Basin.  We never really dropped low into these meadows.

We kept climbing above the Basin.  At this point the defined trail started to ease away and our pace slowed significantly stepping over and around piles of loose boulders as we gradually gained elevation.

At the pass into Yellowstone Basin, we turned and walked up the ridge line to the summit of King’s Peak.

Walking over boulders up Kings Peak, the flat theme continued.  Somehow even the boulders we were stepping on were flat as we gradually walked up shoulder.  Route finding couldn’t be easier here.

On the summit, we were able to see beautiful views from the tallest point in Utah.

After scrambling back down the class two terrain, we arrived back at the pass and grabbed our backpacks.

We started down the many switchbacks that descend into Yellowstone Basin.  We tried to pick up our speed to make it over Smith Fork Pass before dark.

This side of the basin had very undeveloped trails.  The meadows were overtaking them.  It was clear that the traffic that traveled through Henry Fork Basin to summit King’s Peak never walked on the other side of the mountain.  This area was beautiful and calming.  It was probably one of my favorite sections of the hike.

We made it over the pass just as the sun set.  We had to set up camp in the dark, but it was so beautiful.

The next morning, we got a better view of our surroundings.  We realized that Red Castle Peak was right behind our camp.

The rest of the hike was along the nice trail to Red Castle Lakes from China Meadows trailhead.  It was along a creek most of the way, and we blazed through it.

Overall, this 36 mile loop was a beautiful trip.  I would recommend it to any backpacker! The trails were easy to walk on, the elevation was gradual, and the basins were stunning.  This flat mountain range was like nothing I have ever seen!