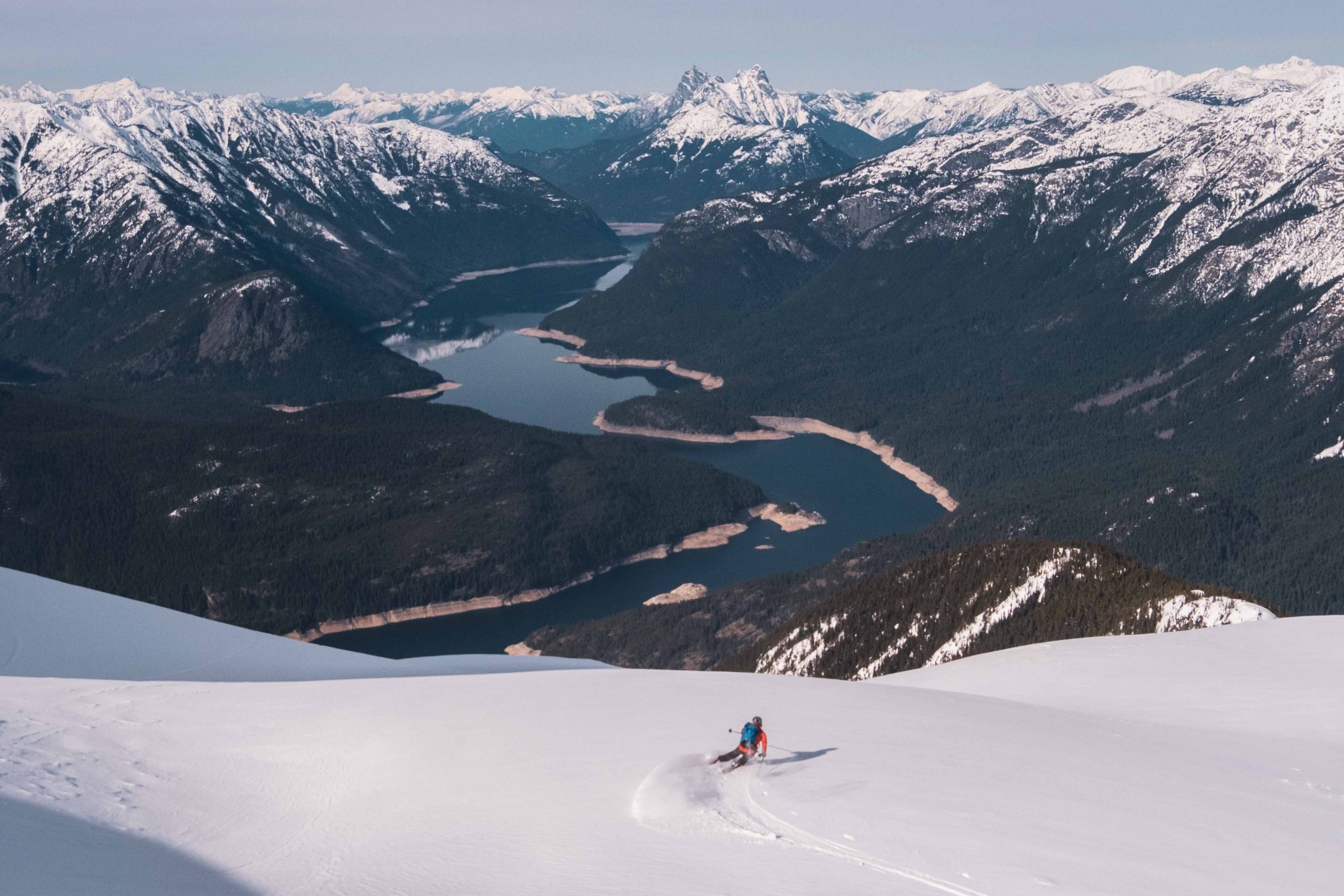 Ruby Mountain is a tour I have wanted to do for many years. Unfortunately, since I started touring, WSDOT had stopped plowing Highway 20 to Happy Creek, where the tour starts. However, this year, WSDOT once again started plowing the extra four miles, making it a reasonable day trip. We have been blessed some great weather and stability lately, allowing for the NW Couloir of Shuksan and the Rock Howard Mastiff Traverse. I felt like Ruby would be the perfect way to cap a trifecta of high alpine ski days.

Nick Danielson and I started from the Highway 20 closure. Nick is a local photographer and filmmaker (check out his website) who shares an appreciation for a good North Cascade landscape. There was about a foot of snow on the road, allowing us to skin from the car.

We skinned the road for about ten minutes before diving into the forest just east of Happy Creek. The snow coverage here was too thin for skis, so we booted a few hundred feet up before skinning once again. The forest was dark and moody as we skinned over frozen tree bombs. Clouds loomed above. It was the kind of morning that had us questioning what we were doing.

As we got higher, the skinning got really challenging. The skintrack itself was ridiculously steep and it had been snowshoed and sideslipped to oblivion. Now frozen, we struggled to get our skins to grip and had to boot multiple sections. It felt like the North Cascades slapping us in the face, reminding us of its primal nature. But the sky above us kept feeling brighter and we became optimistic that we were going to break out of the clouds.

Our spirits soared as we broke out into the sunlight and blue skies above the clouds! After half a year or so away, here we were, in the North Cascades at last! There is no doubt in our minds that it was worth the wait!

We saw a feature we liked, so Nick pulled out his camera while I skied a hot lap. This was a photography trip more than a ski trip, so we made no effort to optimize our skiing. Instead we just envisioned the shots we wanted and made them happen.

Although Ruby saw a lot of traffic the previous weekend, winds and a little fresh snow had completely filled in the upper bowl. We had a blank canvas to work with. The wind had resulted in a thin wind zipper crust, but it was the sort of crust that was only heard, not felt. The skiing was actually quite good!

As we continued on to the summit, the clouds began to break up, revealing a crystal clear Ross Lake , so calm the reflection of the snowy peaks was like glass. We could not believe our luck – a cloud layer breaking up into a blue bird day. The North Cascades deliver!

The rest of the climb to the ridge and then the summit was pretty straightforward. We reached the summit about five hours in and took a lunch break, soaking in the views and naming dozens of peaks in all directions.

People sometimes ask me which summit has the best views in the state. Goode is tough to beat, especially with a summit bivy for the sunset. But Ruby is definitely as strong of a contender as any. Ruby is like an island, a high peak in a otherwise low region, with perfect views in all directions. At about 7400 ft, Ruby is lower than most of the 8000 ft North Cascade peaks. This creates an effect where you can see nearly all of the North Cascades, but not beyond the North Cascades. It creates the feeling that there is nothing else to this world other than the infinite, rugged, and beautiful North Cascades.

After enough peak naming and photographs, it was time to ski! The fun part about trying to shoot ski shots with two photography minded skiers is that we are both good at envisioning ski shots and communicating our ideas. It is subtly difficult to communicate where your skier should go, where to slash turns, how to execute that vision. And oftentimes you only have one shot because after that, the canvas is tracked up. Not to mention that time it takes to skin back up…

Between all the photos, we actually did quite a bit of real skiing. The snow was good enough, but the position was all time. Ruby is truly a mecca of moderate north facing terrain. There are steeps, bowls, half pipes, cornices, and cliffs. The potential is just about endless. One can understand why there was consideration to put a ski area here many years ago.

It took us a few attempts, but I think we got “the shot”.

There are many different types of skiing I enjoy – steep couloir skiing, ski traverses, tree skiing – but I think the purest enjoyment comes from expansive alpine bowls. There is such a freedom to look across the mountain and draw your line on the snow. I love terrain that makes me feel small, but allows my imagination to be huge.

The shadows began growing longer and the air colder. It was time to go. So we raced down the mountain one last time, dancing in and out of the shadows. Beyond us, the light had softened over Ross Lake and the North Cascades. Of all our runs, this was my favorite. Maybe that is just because I knew it was our last.

The snow was pretty terrible on the way out, as it had never softened in the forest. But it was a small price to pay for a perfect day. It has been a long winter here and it was magical to finally return to the North Cascades, at last.