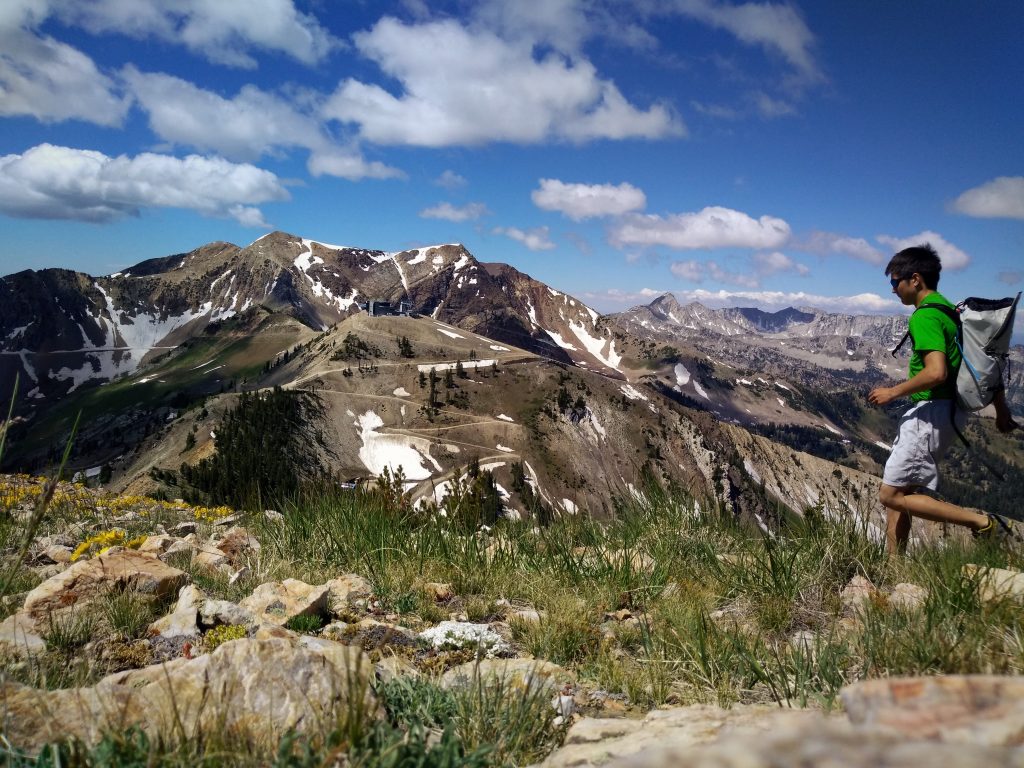 In Salt Lake, they love their ridge runs. Most of the popular ridge runs revolve around Little Cottonwood Canyon, since there are not many other alpine areas in all of the Wasatch. There is actually this huge ridge run that circumnavigates the canyon called the Wasatch Ultimate Ridge Linkup (WURL) which every Salt Lake climber and runner says is one of their goals but few have actually done. It usually takes parties 24 hours or more and involves tons of scrambling and a little bit of fifth class. Since Kylie needed a rest day after our adventures on Hayden Peak the day before, I planned on closing our time in Salt Lake City with a section of the WURL called Bullion Divide.

Kylie dropped me off in the Alta Ski Area a little before 9 am and I began the 3 mile run up the road to the Secret Lake Trailhead. Running at 9000 ft was hard! The road was obviously snow free, but I guess they could not be bothered to open it yet (very Washington-like). The Secret Lake Trail was nice, with interpretive signs, strangely one of which featured a sketch of Shuksan from the North Cascades. Sorry, Utah, you do not have any mountains as beautiful as Shuksan. The climbers trail up to Sugarloaf was obvious and soon I found myself on my first summit of the day! From here, I could see most of the ridge I would be running, all the way to Pfeifferhorn, the distant pointy peak the looked sort of like a Half Dome profile. I decided to celebrate by taking a running selfie using my cell phone propped against some rocks (we destroyed the Sony A6000 the day before on Hayden). It probably took 20 minutes to get this photo, but it was worth it.

Next, I crossed the ridge to Mt. Baldy and then to Hidden Peak, which is part of the Alta Ski Area. These peaks had only 300-500 ft of prominence, so it was very quick between them. Next, I scrambled the “knife-edge” section to the East Peak of American Fork Peak. It had some slightly exposed class 3 sections, but nothing to warrant the two bolts on route! Around American Fork Peak to Red Top, I passed only the second party of the day. So far, the route was accessible, super fun, and pretty good scrambling! I was surprised to not see more people out on a lovely Sunday (maybe that was part of the problem) considering this was one of the only alpine areas of the Wasatch.

Red Top had a very distinctly reddish rock. The WURL goes through a rainbow of rock color in such a small area of land, which is pretty cool. If I was a geologist, I might have some intelligent things to say about this, but alas, I do not.

As I trotted towards Red Baldy, I could tell that the terrain was getting more rugged. Consequently, I began passing more parties. Some were going way low to go around the south side, but that just looked super chossy. I stayed on the “knife-edge” for some fun exposed class 4. Around White Baldy, it was similar. There were groups going hundreds of feet below the ridge to avoid the better scrambling. The final section to the summit of White Baldy featured some of the hardest climbing, with a few low 5th class moves to stay on the “true” ridge crest. I slowed down a lot here, but was still having tons of fun.

Usually, the standard Bullion Divide Traverse ends here and descends down to Red Pine Lakes Trail, but that would put me far ahead of the 8 hr car-to-car plan, so I would not be able to guarantee Kylie would be there. Thus, I decided to throw in Pfeifferhorn. The traverse over to Pfeifferhorn was long and slow. It was not necessarily hard but I was getting tired of scrambling, so I’ll admit that I briefly dropped below the true “ridge crest” for the first time all day. The WURL was not sounding so inspiring. The actual climb up Pfeifferhorn was easy and more crowded than anything else all day, given that it is the third tallest peak in the area. Here I was moving double or triple speed versus most people. I tagged the summit and radioed to Kylie that I was coming down. Dropping down to Red Pine Lakes was a little annoying as I did a poor job of finding the use trails, but the lake was nice. I really wanted to jump in, but there were tons of signs saying not to because it would pollute the city’s water supply. Salt Lake City has few fresh water reservoirs and depends heavily on mountain stream water. They could be in trouble if climate change continues.

The trail back down into LCC was hot, crowded, and rocky on a Sunday afternoon (church was finished by then for most). It was only a little soul-crushing. I stumbled into Kylie at the creek bottom, 8.5 hours after starting. She had gotten the oil changed and bought groceries while I was gone. Thanks, Kylie!