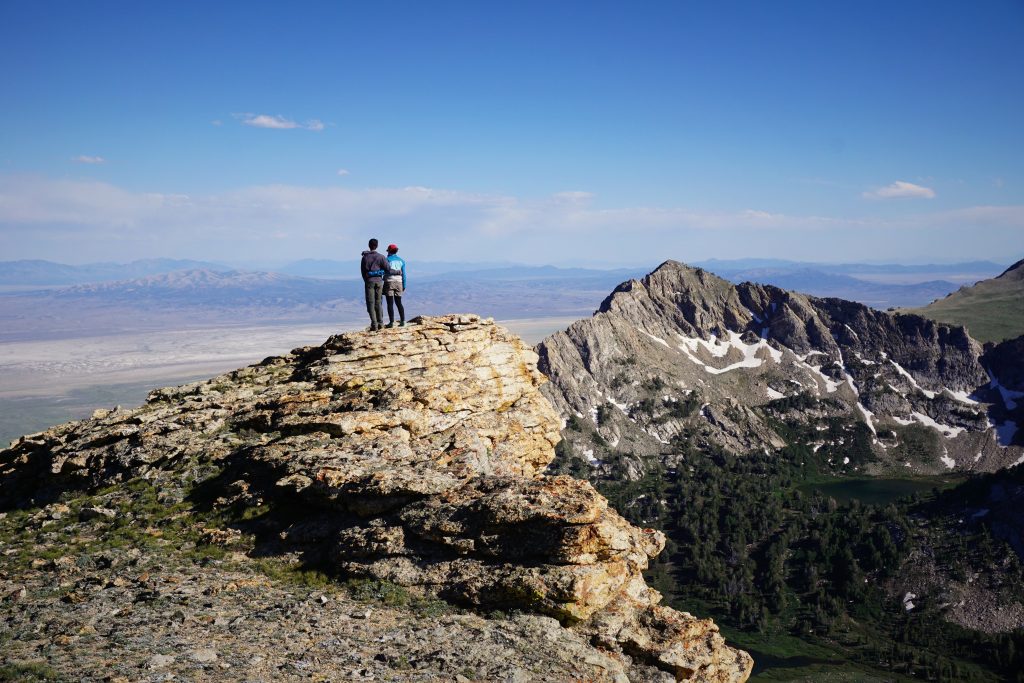 Nevada has this funny inferiority complex to California. They like to compare things in Nevada to famous counterparts in California, especially mountains. They call the Ruby Mountain the “Sierras of Nevada” (not the Sierra Nevada) and Lamoille Canyon specifically the “Yosemite of Nevada”. Regardless of the advertising attempts, Kylie has wanted to hike in the Ruby Mountains for many years, since it is the most famous mountain range in her home state. We managed to align our calendars with her dad, John, so he could come along on his first backpacking trip also!

We met in Elko and one of John’s students who lives there kindly gave us a ride all the way from the north end of the trail to the southern end, removing the need from the car shuttle. Then we were on our way, hiking up through desert sagebrush and flowers. At this point, it looked just like every other mountain range in Nevada (there are a lot of them), but we knew that the northern half of the range was much different.

Once we left the old jeep tracks and started hiking on real trail, we discovered it was super brushy and overgrown! We did not expect this from a desert range, but the underbrush was very thick.

The views were pretty minimal during this section, but there were lots of interesting Basque sheepherder carvings in the trees. John, with his knowledge of everything Nevada related, explained that some of these carvings were from the 19th century, over 120 years old!

For the first day, we made it to somewhere around the South Fork Smith Creek. Here there were some nice forested campsites next to a creek. There was a also a cool looking rock shield nearby, which I explored and made some possible First Ascents on in my running shoes (5.5-5.6).

The next day, we began with a long gradual climb up to the pass. There were more flowers in this area.

As we crested the pass, it felt like we almost were entering a completely different mountain range. The large desert hills were replaced by aqua lakes, craggy cliffs, and sharper peaks!

At Overland Lake, we took a nice break, talking to a local who had just huffed his way up from the valley floor. His family had been hiking in these mountains for four generations! We learned here also that most people skip the whole southern half of the Ruby Crest Trail and just join it here, since most of the nicer scenery is in the northern half. That would explain all the brushiness.

In the afternoon, we hiked a very beautiful section of trail high above the valley. We reached Peak 10207 in the late afternoon. There was no running water for miles and no real shelter from the wind, but it was flat and open so we decided to make camp near here. We struggled to stake down the tent in 30-40 mph winds.

I ran back a few miles to the last water source and collected abundant water. When I returned, I discovered that the tent had briefly blown away, even with huge rocks inside, before Kylie chased it down! The rocks left some nice holes, but at least we did not lose the tent.

I had some great fun trying to setup my 8×10 flat tarp in the hard, rocky ground. The wind kept changing direction, thwarting my best efforts at a low pitch.

It was an epic sunset and moonrise, happening at the exact same time. It was cool to be up so high for camp, but the wind was also pretty annoying.

The wind settled down a little after sunset, but I still did not have the best time sleeping beneath my windswept tarp in Kylie’s short quilt (I gave my quilt to John). I probably slept a few hours. Hopefully it was better for Kylie and John in a real tent.

I woke up in time to catch both the moonset and sunrise.

We packed up camp and started hiking. The trail here is very high and above treeline, definitely one of the more scenic parts of the entire crest trail. We could see all the way to the other mountain ranges of Nevada.

Past Wines Peak, the trail started to descend into the valley of North Furlong Creek. Things began to get very lush and green. We crossed over another small pass, through a gorgeous green valley and uphill slightly to Liberty Lake, where we made camp in the early afternoon.

While John relaxed at the lake in the afternoon, Kylie and I took a little side trip up to the summit of Liberty Peak, an easy but worthwhile scramble from the trail at Liberty Pass. From the summit, we could see down to the desert on both sides. The Ruby Mountains seemed to drop away into nothing. I am so used to bulky ranges like the Cascades that these narrow, prominent desert ranges always take me by surprise. They are very beautiful in their own way.

Back at camp, we had another relaxing evening with some delicious dinner and a soft sunset.

Our last day was very short. We managed the short climb to Liberty Pass and got a view of Lamoille Canyon. We could see all the way down to our car.

The hike down into the canyon was nice and easy, since this part of the trail is more trafficked and maintained. Pretty soon we were back at our car, ready for some tasty milkshakes and some great home cooked food in Reno!

Overall, we were very happy with the Ruby Crest Trail. While it might not be a destination for most, it is certainly a beautiful little thru-hike in an often overlooked area of the West. Nevada should stop trying to compare the Rubys to the Sierras and just accept them for what they are: a beautiful, surprising little range in the middle of the desert. Hopefully, John had a great time and thank you to Kylie for organizing a great trip!