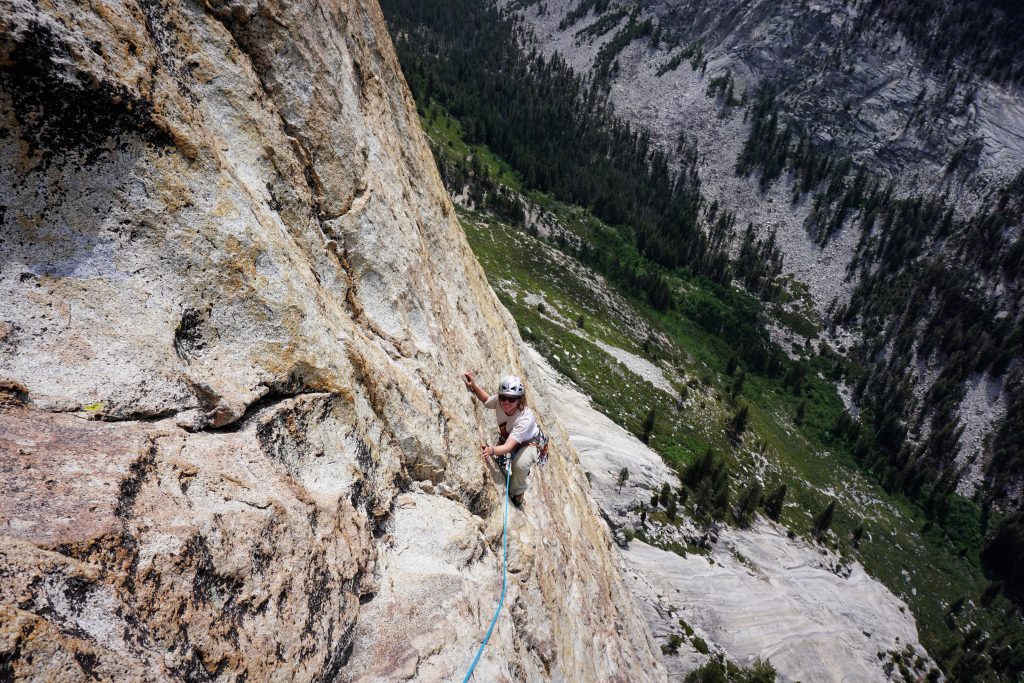 Queen of the High Sierra

Thanks to a friend’s recommendation, I stumbled across Charlotte Dome and its classic South Face back in February when planning for the summer. With a summit elevation lower than most Sierra passes and a long approach, it is easy to overlook, but the more I read about it, the more I liked it. When I looked at booking an overnight reservation to camp at Charlotte Lake, nearly all of July was already booked! I managed to get one of the last spots fortunately.

Since we were still tired from Lone Pine Peak the day before, we slept in and did not get to the Onion Valley trailhead until around noon. We loaded up and started hiking towards Kearsage Pass, passing many backpackers along the way. This seemed to be one of the most popular entrance trailheads for the High Sierra. The trail over Kearsage Pass was nice and thunderstorms seemed to be avoiding us for the moment, which was nice. Kylie was not feeling well so we took a nap break in a nice meadow above the Kearsage Lakes.

By the time we interesected the John Muir Trail, Kylie was really not feeling well. She managed the last mile to Charlotte Lake after many rests and she promptly laid down inside the tent. She had not experienced this for a long time, so we were a little worried, but at least we had the evening to rest. She was strangely showing signs of altitude sickness, but we were actually at a lower elevation than we had been for the last week! I went to the lakeshore and suddenly saw a huge plume of smoke or cloud rising from the south east. It looked like a bomb had gone off.

My immediate concern was that a fire had started in the area that we came from, which would prevent return. This naturally stressed Kylie out more. I hiked a few minutes over to the wilderness ranger station, where I met a very nice ranger and his friends. We discussed the fire and I learned that it had just started, but was a ways south of Kearsage Pass. However, if the fire grew and closed the trail, it would be nearly impossible for us to return to the eastside, necessitating a western exit into Kings Canyon National Park and some crazy hitchiking to get back to the eastern Sierra. I also learned that the approach trail to Charlotte Dome had been decimated last winter from an avalanche and was much more difficult than you would expect. This was disheartening news as I knew the next day would be an extremely long day to do the climb considering how Kylie was feeling. I also met two other guys who were staying with the ranger planning on climbing the South Face the next day. There were accompanied by their wives and were super serious and intimidating.

For the rest of the evening, I decided to at least go and scout the approach to Charlotte Dome so it would be manageable in the dark the next morning. It was a little confusing, but the ranger had done a great job placing cairns through the avalanche debris. I made it through the difficult section and then returned back to camp. Kylie was feeling better now and after talking about it, we agreed that we would give it a shot the next day, waking up around 4 am.

We woke the next morning and began the approach with our headlamps. Because of my reconnaissance mission the day before, I was able to pick up the trail through the avalanche debris and continue on into steep bushy hillsides. Although easier to follow, the trail did not let up in difficulty, randomly ascending and descending straight up and down the hillside. We probably gained 1000 ft over a mile distance where we actually lost 500 ft net elevation. Carrying all the gear, food, and water, I was getting pretty tired but pushed on. Finally, we came to a flatter spot where we got a great view of Charlotte Dome and the surrounding peaks at sunrise.

Up close, the south face was impressively steep and monolithic. This was going to be a very different climb than our other High Sierra climbs, which featured broken up ridges. This was straight out of Yosemite, transplanted into a beautiful steep canyon.

We dropped down and left and traversed over to the start of the route. The two guys I had met the night before were ahead of us. Looking up, the face seemed to continue forever, getting steeper along the way.

While these two guys had seemed very serious the night before, we discovered they were complete hooligans away from their wives. They constantly made jokes, weird gear anchors, and pulled out gourmet snacks on the wall. We passed them on the second pitch since they were having too good of a time to climb very quickly. Then, on the third pitch, we were simuling a short section when another party passed us simul climbing! There were now three ropes and six people crossed up on this remote face deep in Kings Canyon. Luckily, the faster two kept on simul climbing to make some space for us all.

Coming up on the “notch” pitch, often identified as the 5.8+ crux, I followed a chalked flake too far out left and suddenly found myself in 5.10 territory. After down climbing, I chose the right line and climbed through the notch. Above me, the whole face opened up in a huge series of wavy knobs. Next, I climbed a 50 ft section of 5.7 face climbing with maybe just a single tricam along the way. Spooky!

A few pitches later, we began the famous “furrows” pitch. I head read about this pitch, but I was still not prepared for its awesomeness. At this point, the face steepened to almost vertical. Kings Canyon dropped away thousands of feet below. Across the valley, waterfalls cascaded down granite slabs. There was almost no sign of humans. It was true Sierra wilderness. Looking up, the rock was formed in these massive grooves resulting from water erosion. Some were hand sized, others were so big you could fit your entire body inside. It provided for the most steep, secure, and exhilarating pitch of climbing I have ever done. For 150 ft, I floated effortlessly up perfect granite jugs. It was sublime.

Although it was still morning, storm clouds were forming all over the area. It started to drizzle at times, so we quickened the pace and finished the last few pitches. We knew lightning was coming soon.

At the top, we put the rope away and scrambled down the backside, heading back into the bushes. The trail back to Charlotte Lake was long, hard, and featured even more uphill than it should, but we still made it back to camp by mid afternoon. After a quick swim, we packed up and began the long slog out.

Although it had been a long day already, Kylie was feeling much better this time and we were able to appreciate the scenery on the hike out. Charlotte Dome has a long approach, but at least the trails are very beautiful. We took our moments to appreciate the surrounding scenery in the evening. The fire to the south was not an issue with smoke, but we heard it had closed the Whitney area.

We arrived back at the car at 9 pm, 16 hours on the move! It was a long day (longer than most of our single day climbs) but one that we would remember for a long day.