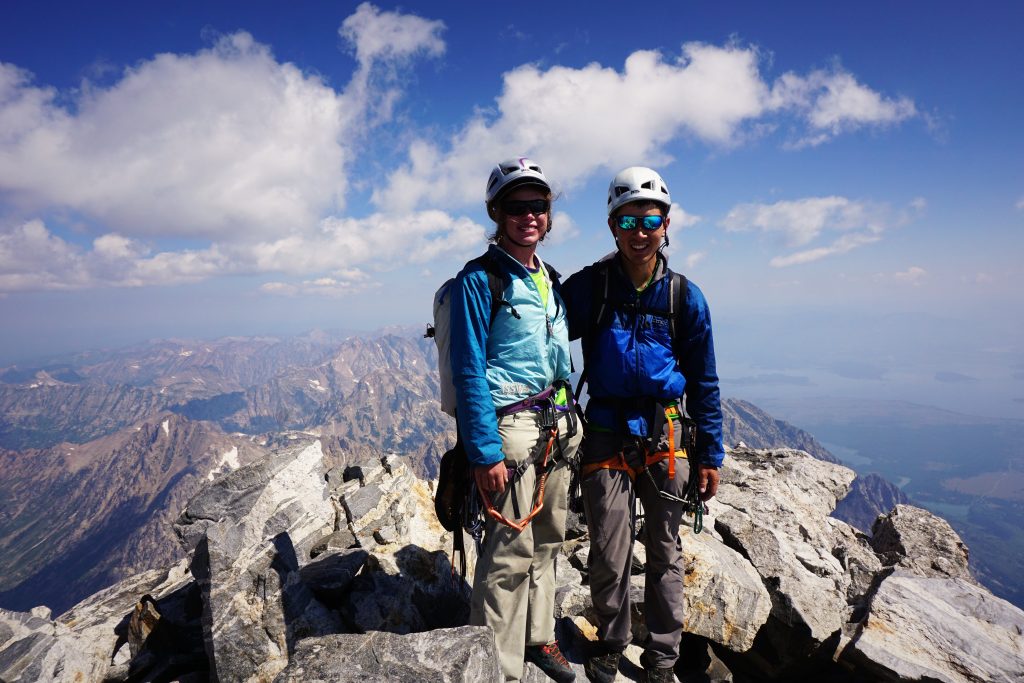 At the beginning of the summer, Kylie and I knew we wanted to climb the Grand Teton, but we were still undecided which route. After sending many harder climbs in the Sierras and Wind River Range, we decided that Complete Exum would be an appropriate climb: long, scenic, but not too challenging. We were lucky enough to get two nights at the Caves campsite and a good weather window (no thunderstorms forecasted)!

On the hike in, we somehow missed the turnoff to Garnet Canyon and found ourselves at the lake above. This was bizarre, because we were in a national park and I had seen the turnoff in the middle of the night when I approached Middle Teton. When we got back down to the turnoff, we realized that it and its signs had been completely obscured by a huge group of mountaineers sitting, taking a snack break! We were annoyed that they had not said anything as two obvious climbers passed them.

We still got to our camp in the mid afternoon. The Caves are not the best campsites, but they have a nice water source and a great view of Irene’s Arete on Disappointment Peak, which we were planning on climbing the day after the Grand.

We talked to some women in the camp next to us. They were also planning on climbing Complete Exum the next day, so we decided to wake up about an hour later than them so we would not be competing to be first on route.

We woke up around 3:30 or 4 am and quickly got going. We both were hiking pretty fast in the morning darkness, passing the camps at the Moraine. Suddenly, we approached a large group of headlamps. There were probably 20 people clustered together, starting up in the darkness, looking at their beta maps. Our friends from the Caves were amongst them. There was supposedly some fixed line through the 3rd and 4th class rock bands, but no one could find it in the dark. I volunteered to go first and quickly found the fixed line and kept scrambling through the section. Kylie quickly followed, and the floodgates opened behind us!

When we got to the Upper Saddle, it was starting to get light so we could easily make our way across the Black Dike to the base of Lower Exum. The start of the route is notoriously difficult to find, and I do not think we started in the correct place. We kept scrambling up through 3rd and 4th class sections, looking for the pitch 1 chimney, but never found it. Eventually, we made some 5th class moves on chalky holds, passed some pitons, and realized we were probably soloing part of the route!

We followed a ramp a ways up and left before retreating because the terrain did not seem right. Eventually, we figured out that we were simply at the base of pitch 3 and had somehow bypassed the pitch 1 chimney! Well, we decided we might as well pull out the rack and rope and start traditional climbing.

I led a long but pretty easy chimney pitch up to the base of the Black Face. The Black Face is the crux of the route, a steep intimidating 5.7 face pitch. Kylie really wanted to lead this one, so I gave it to her.

She started off well, clipping a few pitons and climbing up and right. But the rock was slick and her hands got really cold. She was a ways above her last piton when she slipped and took a tumbling fall down, hitting her bum and foot on the way down! She let out a scream that probably was heard from down in the canyon. I lowered her back down to the belay as she was crying and clipped her in.

We took a few moments to try to figure out what happened. The pain in her butt mostly went away and her breathing improved, but her left foot still hurt a lot. We discussed and decided that, considering all the scrambling we had to do to the base of the route, it would be easiest to continue up to at least the top of Lower Exum and possibly descend from there or further evaluate. So I led the Black Face pitch and belayed Kylie up.

One more easier pitch led us to the top of Lower Exum and the beginning of Upper Exum. We finally entered the sun here and could warm up.

After some painkillers, Kylie’s foot was feeling a little better so it seemed like maybe it was a bad bruise or a fracture? We could bail here, descending the approach to Upper Exum, or continue up the route to the summit. We eventually decided to continue on.

Upper Exum is a very easy climb, more of a scramble with a few 5th class steps and we stayed in our approach shoes. There were tons of complicated features and route descriptions in the beta, but we did not really bring any beta and instead just scrambled upwards, taking the path of least resistance. We were with one other party, some boys from the east coast. It was their first big alpine rock route. They felt jipped that there was so little real climbing so they went off route to do some extra climbing. Hopefully it worked out for them.

Along the way, I constantly tried to help Kylie out and make sure she did not have to put all her weight on her left foot. She is so incredibly strong, definitely a much tougher person than I am!

Pretty quickly, we got to the base of the crux Friction Pitch (5.5). Looking up, it was difficult to tell where in this wide slab you were supposed to climb up. There was also a protectable corner around to the left.

We decided to climb up the edge, which offered positive holds, good friction, and memorable exposure!

Above this pitch, we were able to traverse easy 3rd class ledges on the left all the way to the summit, somehow completely missing the 5.4 “V Pitch”! At this point, we just wanted the easiest way down, so we did not care. We got to the summit around noon and it was a beautiful day over the Tetons! The prominence and steepness of the Grand is unlike any other peak we had climbed before.

We paired with another group that had a longer rope for the rappels down to the Upper Saddle. They were brothers from the midwest and had hiked all the way from the climber’s ranch that morning.

Once at the upper saddle, we began the long descend to the lower saddle through lots of loose 3rd and 4th class terrain. We knew this would be extremely painful for Kylie, so I gave her both poles and we took it slowly. Luckily, we were behind an Exum Mountain Guide who knew the very best way to descend this section, even taking us through this cool tunnel! He was very kind and saved us a lot of pain.

We slowly made our way down to camp, reaching camp late afternoon. Kylie soaked her foot in the cold creek water, but it was still hurting a lot. Since we had one more night at the camp, we decided just to try to relax and take our time before leaving the next day.

The next morning Kylie’s foot had swollen more, so we knew it was a serious injury. We slowly made our way out, trying to reduce the pressure on her foot. I felt so bad for all the pain she was going through. I always feel responsible when things like this happen, even if it is not necessarily my fault. I would easily swap places with her and go through the pain myself to allow her to have a perfect experience.

When we got back to the car midday, we drove straight to urgent care in Jackson Hole. Here, we learned that she had broken the fifth metatarsal on her left foot (the pinky toe part), meaning it was a broken foot! We were very disappointed, as we knew this meant she had a long recovery and it was the end of our summer adventures together. We began the drive back to Reno that night.

Although it was a disappointing ending, we were so grateful for all the other fun adventures we had this summer. She could have been hurt much worse on that fall or required a helicopter rescue. If nothing else, we ended our amazing trip on one of the grandest, most iconic peaks in the world, the Grand Teton.