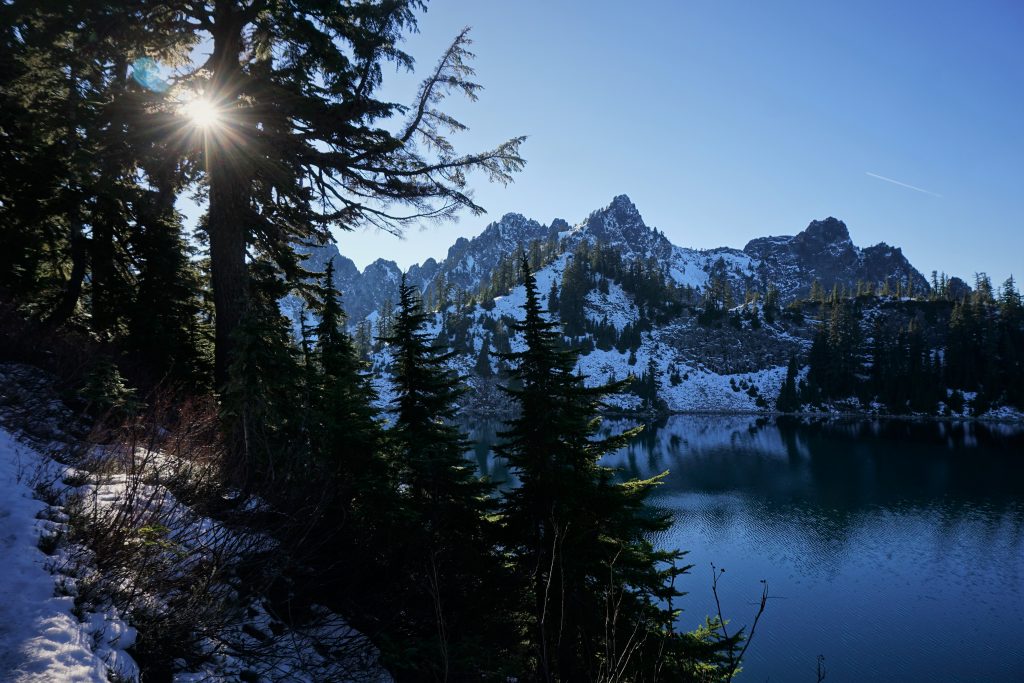 With the never-ending sunny fall weather we have had, Logan, Kylie, and I decided to patiently forgo our skis for another weekend in favor of running shoes. I had an idea about combining the Granite Peak Circumnavigation and Chair Peak Circumnavigation (aka Melakwa Pass Loop) into a fun little run with some off trail travel and over half a dozen lakes. The run would go from the Granite Mountain Trailhead past Oallie and Pratt Lake, Lower Tuschohatchie Lake, Melakwa Lakes, over the pass to Chair Peak Lake, and tag Gem and Snow Lakes on the way out. Usually, this would also require a 7 mile road run at the end, but I convinced Kylie and Claire to do the Gem Lake hike, so Logan and I could do this as a thru-run.

Logan and I got dropped off at the Granite Mountain trailhead while Kylie and Claire kept on driving to the Snow Lake trailhead. The morning was cool and breezy and we made good time to the first pass overlooking Oallie Lake.

From there, we descended towards Pratt Lake. The trail in this north bowl was surprisingly snow and ice free, allowing us to run quickly. As we traversed towards Lower Tuscohatchie Lake, the wind really picked up and we were freezing in the shade. Gusts were probably 30 mph even in the trees. Luckily, when we arrived at Melakwa Lake, the wind died down and we entered the sun. I guess Chair Peak was protecting us from the northeasterly winds.

The off-trail section to Melakwa Pass was super straightforward, yet there were still a mysterious amount of cairns (not really sure how you could go the wrong way here). The talus was surprisingly steady and the snow in the gaps supportive so that travel was generally pleasant. We were now baking in the calm sun.

We had partially planned this trip as a reconnaissance mission to scout the area for ski lines and ice flows. There was a pretty good set of flows on the east side of Kaleetan and a steep couloir that might be a fun ski just beyond that. My observation about water ice in Washington is that there is much more than people give it credit for; you just have to be willing to take chances with conditions and do some longer approaches. And it will not be as fat as Hyalite in Montana.

Cresting Melakwa Pass, we were blessed with a lovely view of Chair Peak Lake and Glacier Peak in the distance. Who could have known Snoqualmie Pass held such cool terrain!

The snowfield down to Chair Peak Lake was moderately steep (30 degrees) and shaded, but the snow proved fine for plunge stepping in our Crossovers. Logan didn’t have microspikes, so he walked more cautiously, but I simply put mine on and let loose, running and skipping down the snowfield.

We crossed the outlet of Chair Peak Lake and ascended about 100 ft to a knoll. Here, we got a great view of the Alpine Lakes Wilderness giants, including Overcoat Peak, Chimney Rock, Lemah, and Chikamin Peak.

On our traverse towards Gem Lake, we encountered this perfectly smooth ice pond. My guess is that the recent rain melted the top layer and then refroze, creating a flat, smooth surface even better than any ice rink I’ve been on. We skated and twirled around this little alpine ice rink.

The rest of the traverse involved some moderately steep side hilling across snow-covered talus, but nothing that was too difficult. We just trusted our intuition and naturally kept running into cairns, so I guess we were doing something right. Once on the ridge proper, there was a little brush to deal with but mostly just fun jogging along a steep icy ridge. I even had to use my hands in a few places. The peaks all around us were very steep and impressive.

Once we got to the bowl overlooking Gem Lake, we descended down and to the right to cross the outlet. Gem Lake was gorgeous and warm in the sun with little wind, so we took a short break and finished our lunch.

There was only one other party at the lake, unusual for this nice, accessible hike. The trail down to Snow Lakes was icy in places, but generally runnable. Snow Lake was predictably cold, with the wind whipping up from the Middle Fork.

At the Snow Lake overlook, we finally caught up with Kylie and Claire. Perfect timing! They had enjoyed a good hike, taking an extended sunbathing break at Gem Lake. We hiked down together, reaching the car just as it was starting to get cool again.

Overall, I was impressed with the ruggedness of some of these Snoqualmie Pass peaks. The run was fun, but it was even more exciting to see the various winter alpine climbs that are now possible for us. We are really lucky to have so many accessible “baby” alpine climbs in the Snoqualmie Pass area. I’m looking forward to getting on some of these routes this winter and spring!