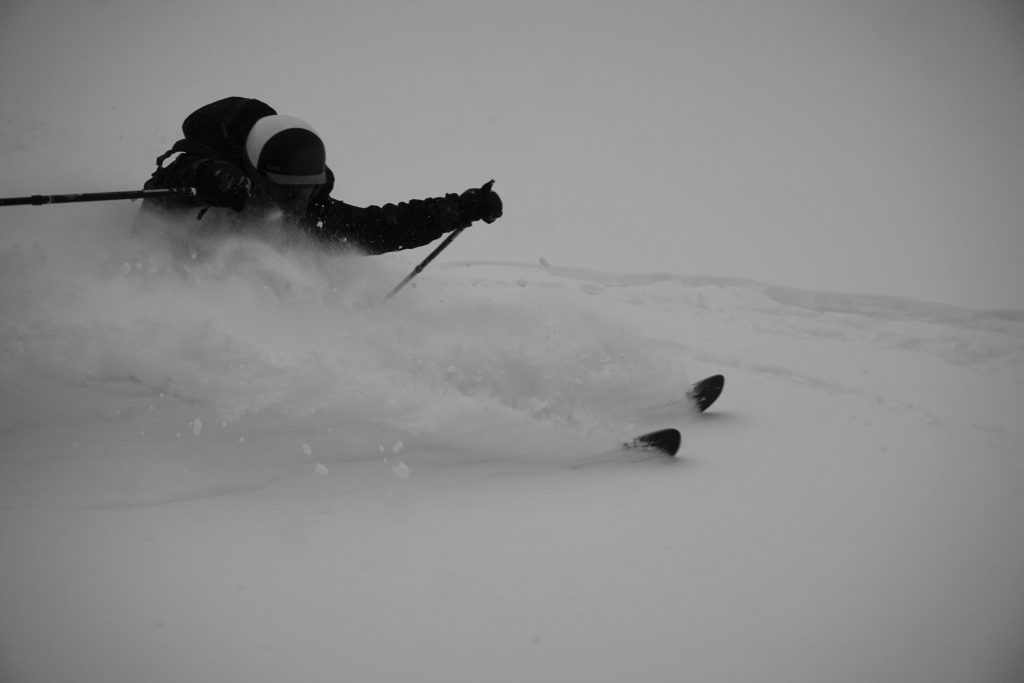 A Multisport day at Alpental

Jon, Kylie, and I got an early start Sunday to embark on a fun day of ice climbing and ski touring at Alpental. Winter has been in full swing this February, so the ice is finally climbable and the powder deep. It would be Jon’s first time ice climbing and ski touring (outside of his avy course) so we were excited to have such a positive member along!

The various Alpental Falls climbs are all visible from the parking lot. We chose the rightmost line because it appeared to be the longest section of ice and most protected from avalanche danger from above. We skinned up the slopes, switchbacking through deep powder for 10 minutes or so before reaching the base of the climb. Then it was a struggle to get a harness on, wallowing in the deep powder.

I led the route, which had actually a lot of WI2 ice covered by a thin layer of snow. More of the route was ice than snow, which is awesome for a lower angle route like this. The ice was a little thin and funky in places, occasionally punching through to the running water or rock beneath, but there were also fatter sections to put screws in. Right as I got to the crux final WI3 curtain, Kylie and Jon realized I was past the middle mark of the rope! So unfortunately, I did not get to climb the best part. Instead, I made some fun WI3 stemming moves right to an established tree anchor and lowered down. I actually could not be lowered all the way to the ground with our 60 m rope, but a 70 would have made it. It seems unlikely though that a 70 could allow you to top rope the upper section so you would have to either multi pitch it or start on the snow higher to the left.

Like many times before, we learned that ice routes are always longer than they appear! Kylie and Jon had a good time following, although they found their crampon front points to be shearing through the ice. Perhaps it was the horizontal front points? Jon rapped off and we packed up gear and then made a short little run back down to the car.

We left the car for our ski tour around 11 am, heading up through the Phantom Trees right next to Alpental Falls. This skin track is steep through moderately spaced trees, so there are a lot of kick turns! Jon had never really done kick turns before, but he picked it up very quickly. Kylie did an excellent job leading us, demonstrating superior form.

Around 4400 ft, we left the main skintrack and started traversing to our left (northwest) across the slopes. I was now breaking trail and it was tough work! Our goal was to reach a lower angled bowl to the northwest of the Phantom zone along the same ridgeline. We thought there might be some good skiing there and into the Snow Lake drainage.

We continued traversing left and gaining some elevation, eventually entering the broad bowl. The trees here were wonderfully spaced old growth. It was incredibly peaceful to skin along through beautiful untracked forest with snow softly falling.

We kept traversing and rising for another 30 minutes or so, eventually reaching a saddle with the Snow Lake drainage around 5100 ft. Looking at the map before hand, we thought this bowl might offer nice gladed skiing. As we approached the lip, we found cliffs and steep drop ins. We definitely could ski down it, but there was no way we were skinning back up! So we decided to leave that drainage for another day and ski back down into the broad basin.

Our first downhill run was short and mostly traversing to get back into the bowl, but we still found some epic powder turns. The snow was bottomless and relatively light (by Snoqualmie standards).

On our next time up, we skinned more north directly up the bowl towards the saddle between the ~5150 point and ~5350 point. We had spotted some wonderful chutes and treeshots off of the higher point back into the bowl. When we reached the saddle, we got a good view northeast into the Thunder Creek drainage. We saw a good drop in point and an old skintrack back up, so we decided to take a short run down there. A steep drop in through a few trees gave way to mellow open slopes.

It was cool to be underneath the steep north face of Snoqualmie Mountain. The skies were clearer to the north, giving us views down the Middle Fork of the Snoqualmie River towards the Alpine Lakes Crest.

The short little run was so good, in fact, that we decided to lap it. Kylie took the camera and Jon and I specifically tried to hit a nice little wind lip for some air.

Our return skin up to the edge of the Alpental Valley was a little challenging with some wind lips to overcome at the top, but we made it. From there, we skinned across the south face of the 5350 point to get to a nice fall line. The clouds were thick and the light growing flat, so we decided to transition a little bit before the top for our final, long run down.

The first few hundred feet were awesome 30-35 degree slopes with nice batches of trees to regroup at.

Down lower, we entered the beautiful old growth trees and Jon found some more air to hit.

At around 4400 ft, we started traversing hard skier’s left, regaining the Phantom Trees skintrack around 4200 ft. From there, we skied sections of the Phantom slide path and trees back down to Alpental Falls and our car. We were all exhausted, but satiated with an epic day of ice and powder!N