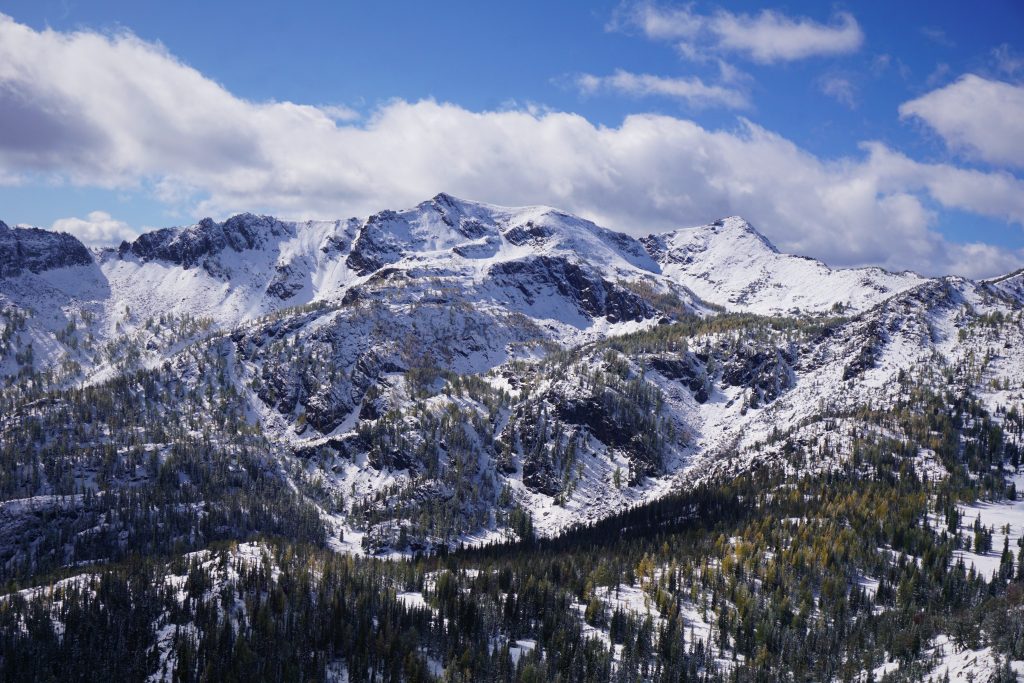 Taking the Skis for a Walk

Fall has been strange here in Washington. In the first week of autumn, a freak snowstorm blasted the Eastern Cascades, dumping two feet at Mission Ridge! I have had my eye on a fall ridge traverse of Big Jim and Lou, but with all the new snowfall, I was unsure about proper means of transportation. The Chiwaukum Range is not too far from Mission Ridge and of similar elevation. I decided to carry skis up in case they were needed for flotation, then ditch them if they were not needed.

The other (or better) Kyle decided to join me last minute. We drove out over Stevens Pass, admiring the red hillsides and dusting of snow above 4000 feet.

The Hatchery Creek Road had one spot where the van’s tires spun going uphill, but was otherwise very passable. It was a brisk fall morning as we loaded up our packs, but the sun was already warming the east facing hillside.

The hike begins by ascending a few thousand feet through brushy, burned hillside out of Tumwater Canyon. Normally, this would be pretty boring but the undergrowth was alive in reds, orange, and yellow.

High up Tumwater Canyon, we could see snow and rime covered trees.

We plodded along, passing some nice springs that probably do not usually flow at this time of year but were flowing nicely. We started to see a dusting of snow around 4500 ft, but it only stuck to the vegetation, not the warm ground. Eventually, we crested the shoulder and reached the Badlands Trail junction. The snow became more continuous above this.

Five and a half years ago, Chris and I climbed Big Jim. It was the climb that started it all. We hauled 30 year old camping gear through a wet spring snowpack and made it all the way to the top. Snowshoes broke, but we marched on. As we moved through the scenery, I was reminded of little details from our trip that I had since forgotten. It was incredible to think of how far I have come.

Given the snowcover at this elevation, it was seeming doubtful that we would need the skis much higher up. At the high point around 6000 ft, we decided to make a final call. The snow was still only a few inches deep on this southern aspect, so it probably was not worth it to keep the skis with us. Also, Kyle was feeling quite nauseous and not sure if he could continue. We decided to continue on together at an easy pace.

We followed the trail across an open meadow and into non-burned forest. With the shelter of the trees, the snow got deeper, about 8-10 inches. It was definitely skinnable, but you still would have to be careful about hitting rocks and roots.

Eventually we reached the shoulder of the ridge where it joins with the Icicle Ridge Trail. Kyle was feeling pretty awful and would not be getting to Lake Augusta or Big Jim. He offered to wait while I continue, but I did not really feel like leaving him behind. I could have trudged on to Lake Augusta and probably up Big Jim and gotten back before dark, but I honestly was not feeling that motivated and coming off a cold myself. Instead, we just decided to ascend a few hundred feet up the ridge to our north to around 7000 ft and get some good 360 views.

We eventually reached a point where the ridge got steep and overgrown with shrubs, so there was no point in continuing on. We could look off to the north east into the sheltered east facing bowl on Big Jim. The larches here were quite gold, but the rime ice actually seemed to cover up their color some!

My original planned route ascended Big Jim from the east side, and this afforded me a nice view of which line I would take in the future.

We found a nice sunny spot to take a long lunch break. Clouds rolled in and out, chopping off the heads of the mighty Stuart Range Peaks across the valley. It was truly a perfect fall day.

Kyle was generally impressed with the ski mountaineering potential in this area. Access is good and there are abundant lines. In general, the Chiwaukum is impressive for the amount of non-glaciated alpine terrain it has. Many of the high ridges look like alpine tundra kind of like the Pasayten Wilderness. It is so close to the Stuart Range and other parts of the Alpine Lakes Wilderness, yet so different. There’s something about the Chiwaukum that keeps me coming back.

Earlier, I was feeling disappointed that we would not be able to continue to the summit, but I had to accept that today was just not our day. Fall can be a difficult time in the mountains and we misjudged the snow conditions. With Kyle feeling so sick, it was definitely better to take it easy and just enjoy the rare sunny fall day in the mountains.

On our way down, we marveled at the massive larches. On behemoth even had six trunks emanating from the same base! It was like six larches slammed together. Kyle went on an on about all the different big larches he has seen throughout the Cascades and the weird chopped larches out near Cathedral Peak in the Eastern Pasayten. The big larches are found at lower elevations and seem to take longer to change color.

The hike out went much faster than the hike in and we were surprised how quickly things were melting out. In a few days, Big Jim will be much easier (but not so sunny!). We definitely did not time this trip very well, but it is difficult to know snow conditions ahead of time. I will certainly be back to do an east side route on Big Jim and a traverse to Big Lou. Maybe I will just traverse the entire Chiwaukum Range on the ridges! In the Cascades, the possibilities are seemingly endless.