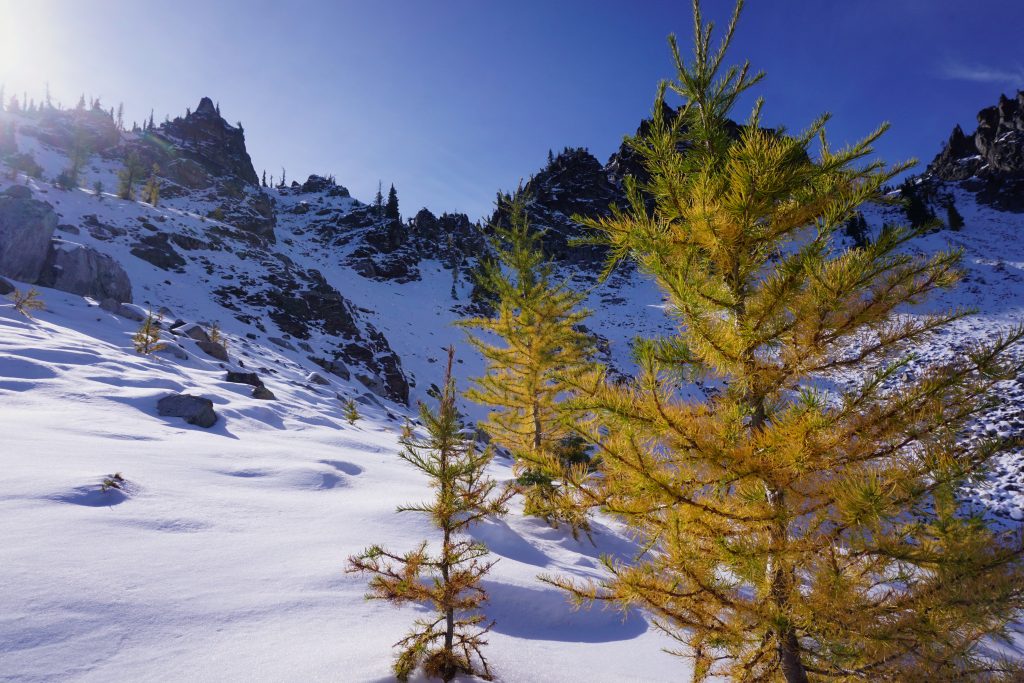 The Quiet Side of Icicle Canyon

On a fine fall day, Sara, Shane, and I went for a hike to Chatter Creek Pass. Our original plan was to go all the way to Lake Edna, but there was considerable snow after the pass and no bootpack, so we were content to stop at the boulder field just north of the pass.

It had been a few years since we had done the Ladies Loop together as a two day backpacking trip, so none of us remembered the trail very well. It is a little rough and overgrown, so the 4000 ft to the pass definitely feels like it. As a friend I encountered on trail said, you definitely have to earn it a little more on this side of Icicle Canyon, but the solitude compared to the bustling Enchantments is certainly nice.

The climb to the pass only had a few inches of snow since it was open and south facing, but as we peered over the other side of the pass, we could see a foot or more. The larches were still surprisingly green in this area, but the patchy snow cover it made for an interesting combination of red, white, yellow, and green like I had never really seen before.

We decided to descend to the boulder field, sometimes referred to as Edna Basin, on the other side before taking a lunch break. This was the most beautiful section, with decent snow cover and yellow larches. There were plenty of luxurious granite boulders to lie on in the sun.

There were many mini-larches only a few feet tall. These were the furthest along in their wintry transformation, thus making for the nicest photos.

Eventually, we agreed it was time to go so we hiked back up the pass and then the long descent back to the car.

Thank you to my sister and brother-in-law for joining me on a nice autumn hike!