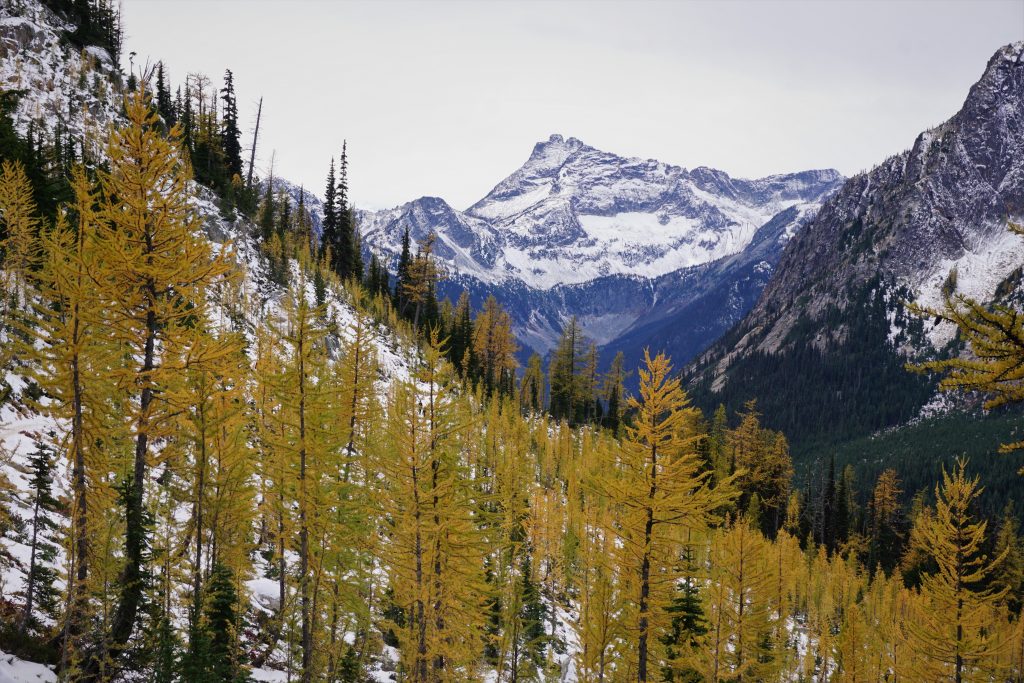 The Peak of Larch Madness

Shane, Sara, my dad, and I got together for a lovely hike to Cutthroat Pass via the PCT from Rainy Pass. This hike is a fall classic, but not so much as the Heather Pass – Maple Pass Loop right across the road. In fact, there was a sign at this trailhead saying if you are looking for the Heather – Maple Loop, you’re at the wrong place!

There were surprisingly few cars at the trailhead as we pulled in around 8:30. The ground was hard and frozen as we began the walk. The river crossings were moderately treacherous because the boulders and logs were covered in a layer of ice, but we all managed.

Through the high clouds, the sun managed a slight glow, casting an eerie light across the whitened mountains. The wind was perfectly still. It almost felt like the first day of winter, except for the fact that highway 20 was still open.

Probably about three miles in, we entered the larches, the reason everyone comes here in the fall.

Usually, mid October at Rainy Pass would be past the peak of the larches, but the larches seem to have peaked a week or two late this year for some reason. This has worked out for us, as we got to walk through the golden needles in their finest hour.

In the upper basin just before the pass, the larches thin out and the views open up. There was still a considerable amount of running water at the headwaters of Porcupine Creek. In the distance, Dome Peak was glowing in the sunlight.

We reached the pass a little over two hours from the car. It was surprisingly uncrowded still! We got fantastic views of Silver Star, Liberty Bell, and the distant Sawtooth Wilderness.

Since my dad was not sufficiently tired yet, we decided to hike cross country to the north up to a high point on the ridge. The snow was generally 4-8 inches deep, but occasionally deeper in places. This section was open and south facing, so it was generally not too much of an issue. Snow depth is highly aspect dependent at this time of year. Many south faces are melted out at 7000 ft but north faces are almost skiable.

We reached a high point where we could stare down to the vertical cliffs on the north side. Tower, Golden Horn, and Jack dominated the view to the north. To the west, we could see Goode, Black, Logan, and a bit of Eldorado even.

There is something very peaceful about watching the mountains slowly turn to winter over the last few weeks. It is like a freight train coming and you know you cannot stop it. The mountains I have come to know so well in the summer begin to ice over, taking on a whole new character.

I scrambled down to a little rock tower, which had a nice diving board that stuck out above the abyss. Below me plummeted hundreds of feet into a wintry couloir.

There was a breeze and the group started to get cold, so we got on our way. We tried to stay on the snow, as that was easier than walking down the scree.

Back at the pass, there were now dozens and dozens of people, with more arriving every minute! We probably passed a hundred people in quick succession as we headed down. But then as quickly as the came, the trail became quiet once again. I guess everyone got to the trailhead an hour after us!

I feel grateful that we got the opportunity to experience the last bit of autumn before winter in the mountains. In many ways, the mountains’ final hour is their finest hour. And it was Shane’s first time on the North Cascades Highway and my dad’s first larch hike, a successful day all around! Now let it snow…