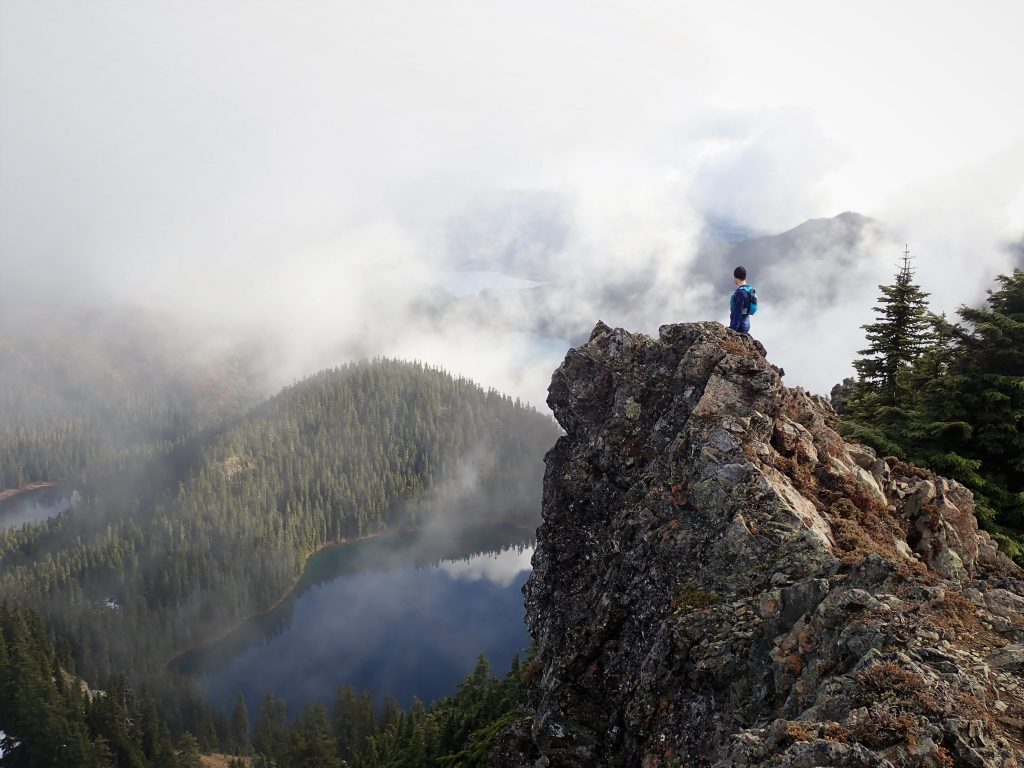 The Quiet Side of Snoqualmie

Daniel, Chris (one of my co-workers), and I did a loop from the Annette Lake Trailhead over Silver and Tinkham Peaks and back on the PCT.

Despite the forecast of “decreasing clouds”, it was raining as we left the parking lot and trotted up the Annette Lake Trail. However, near the lake, we began to break out of the fog and mist and see patches of blue sky above.

The lake, while rather mundane, had beautiful swirling clouds that cast a new beauty on the landscape. Abiel Peak and its steep north face towered above.

At the lake, we turned left and followed a climber’s trail up through steep forest. It broke out into steep (small) boulders. There were cairns to follow to link sections of brush.

The climb was pretty relentless and at least 1500 ft long! It was continuous 35 to 40 degrees and would probably make for great skiing when avalanche danger is low.

Eventually we reached the north ridge of Silver. From there, we followed the ridge south, staying to the right side of the ridge since the ridge proper was very brushy.

We gazed through misty clouds on the summit of Silver. The north bowl still had some snow. Silver Peak is a classic spring ski because it holds snow into June usually and you can drive within minutes of skinning later season.

After a short break, we bounded down the south ridge of Silver, which has a sort of trail.

We followed the trail all the way to the Abiel-Tinkham saddle. Then we picked up a faint climbers trail up the west ridge of Tinkham. This one is steep! The last bit weaves through cliff bands to keep it at 2nd class to the summit.

The north face of Tinkham is a vertical 500 ft cliff. It was impressive to lean over the edge and stare down. Maybe there could be ice here?

As we headed down the east ridge of Tinkham, the clouds finally cleared more and we had beautiful views down to Mirror Lake and the reservoirs along I90. This was a view that might seem rather tame in good weather, but the floating clouds made the moment feel mystical. Sometimes I feel like I enjoy these lesser Snoqualmie peaks more in questionable weather because it brings new life and mystery to the area.

We followed a use trail down to the PCT and Mirror Lake.

At Mirror Lake, we saw more people for the first time. Then we started jogging on the PCT. The PCT is not the most beautiful or easy in this section, but is still good running.

As the roar of I90 became imminent again, we turned left down a forest service road. At a big power line, we turned right down a faintly marked steep use trail. This trail provided a very steep descent (apparently they fix ropes here during the Cascade Crest Ultra) down to the John Wayne Trail.

From here, it was just an easy jog along the trail back to where it intercepts the Lake Annette trail and the car! It came out to only 14 miles and 5200 ft gain, but the terrain felt quite rugged and slow, thus taking us 4.5 hours to complete! This was a fun loop and credit goes to Chris for introducing us to a new area!