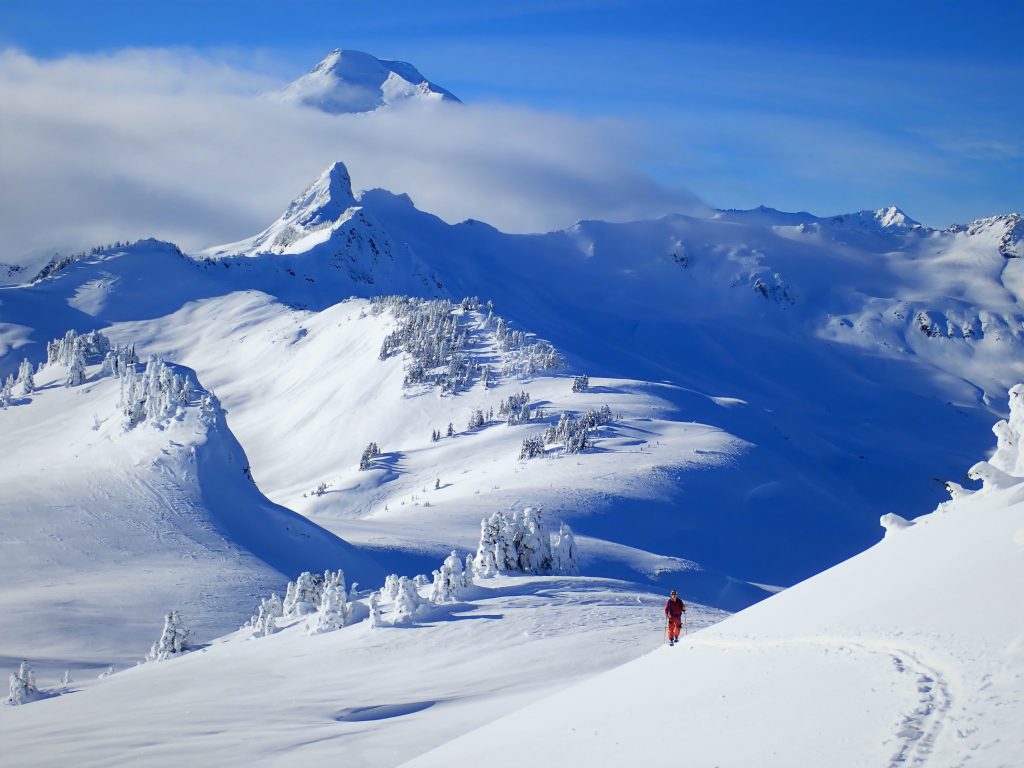 After an excellent day skiing the Stoneman Couloir, Jon and I set out for another day in the Baker Backcountry. We began up to Artist Point.

Our original plan was to tour around the Herman Saddle again, but as we reached Artist Point, we spotted the silky tracks on the north east face of Video Peak (aka Ptarmigan Perch), with wispy clouds and Kulshan beyond. Like a mouse is drawn to shiny things, we decided to change plans and head out towards Ptarmigan Ridge. We knew the snow wouldn’t be good really anywhere after the nasty wind the night before, but on a bluebird day like this, few places are more beautiful than Ptarmigan Ridge.

We ripped our skins, traversing downwards beneath Table Mountain.

At Ptarmigan Pass, we met some other parties, including a dude we met near Herman the day before. One party was complaining bitterly about the poor snow conditions. We took a quick run down into the next valley. Although it was breakable wind crust, the crust was not terribly thick so we were able to carve through it pretty well.

We branched off a little southwest of Video Peak and I set a skin track towards the notch on the south ridge of Video Peak. We watched the other party of three push further out on Ptarmigan Ridge, passing through light and shadow. Coleman Pinnacle stood proud in the background.

We we moved towards the summit of Video Peak, the clouds began to part, revealing Baker in her full glory. The aesthetics of Coleman Pinnacle, the clouds, and Baker were absolutely perfect. It was just another marvelous day in the Baker Backcountry!

The southern aspect seemed to be softening some from the direct sun, so we decided to take a little 400 ft run down the mellow south face. The crust was broken and the skiing was quite good actually!

I set a nice, low angle skin track back up Video Peak. Most of the skin tracks in the Baker Backcountry are inefficient and steep, so it was nice to get to set an actual good skin track for once.

At the top, we took a lunch break and soaked in the December sun. It was Jon’s first time out to Ptarmigan Ridge and he remarked how it felt so much more “out there” than the Bagley Lakes Basin and Herman Saddle Area. Even though the snow was not too good, it was great to share this beautiful area with Jon on such a sunny day out. Sometimes that is all you can ask for: good company, beautiful views, forgettable snow.

We followed the existing tracks down the northeast face of Video Peak. I had skied this once before, in poor visibility but better snow. The snow was decent here, better than our first run of the day.

After the rollover, the face steepens and the snow actually became pretty good for the last few hundred feet! I found a cool 45 degree spine that held good snow.

Then we put skins back on and cruised up towards Artist Point, chatting with some nice ladies from Vancouver along the way. Our final run off Artist was a mess of steep breakable crust, making for some exhausting turns. Classic way to end the day in the backcountry!