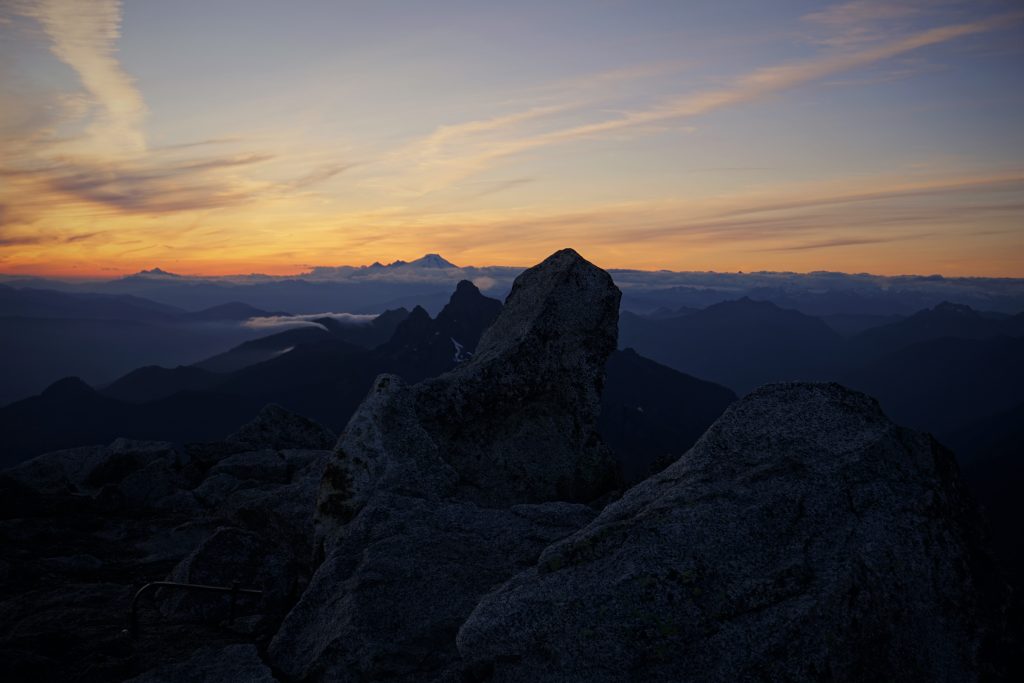 This summer, Daniel has been working as a wilderness photographer for Mt. Baker Snoqualmie National Forest. He was looking to take some sunset pictures of a person from a high peak sometime, so he asked me if I wanted to hike Pugh some evening. We had done Pugh many years ago, back in high school, but the summit never left the clouds that day. So one day, I worked from home and he picked me up around 3 in the afternoon and we drove out to Darrington.

The trail felt much faster and easier than it did back in high school and pretty quickly we were up in the meadows beneath Stujack Pass.

Above the pass, there were some snow patches. Daniel switched from trail runners to light mountaineering boots, but I just stayed in my La Sportiva Crossover 2.0 GTX. I think he bought a pair afterwards!

As we got to the base of the scramble, we could see that the summit was still in the clouds unfortunately. Would we be clouded out once again?

The scramble is nothing more than a short knife edged section of goat trail and then a few class 3 moves higher up. It is really fun! We arrived at the summit an hour or two before sunset, but still socked in by clouds. However, the clouds slowly began to break, offering great peek-a-boo views all around.

It was really beautiful watching the clouds breakup around the setting sun. It oftentimes seems like these Cascade peaks clear up right around sunset.

I’m sure Daniel got some great photos from the perfect sunset. Sure enough, a few months later he sent me an article from a wilderness magazine and it was a distant photo of me with Sloan peak behind!

We downclimbed the scramble before it got completely dark and then jogged down the trail in the middle of the night. We got home probably after midnight, ready for work the next day, but it was definitely a worthwhile sunset hike and great to finally get summit views from Pugh after all these years!