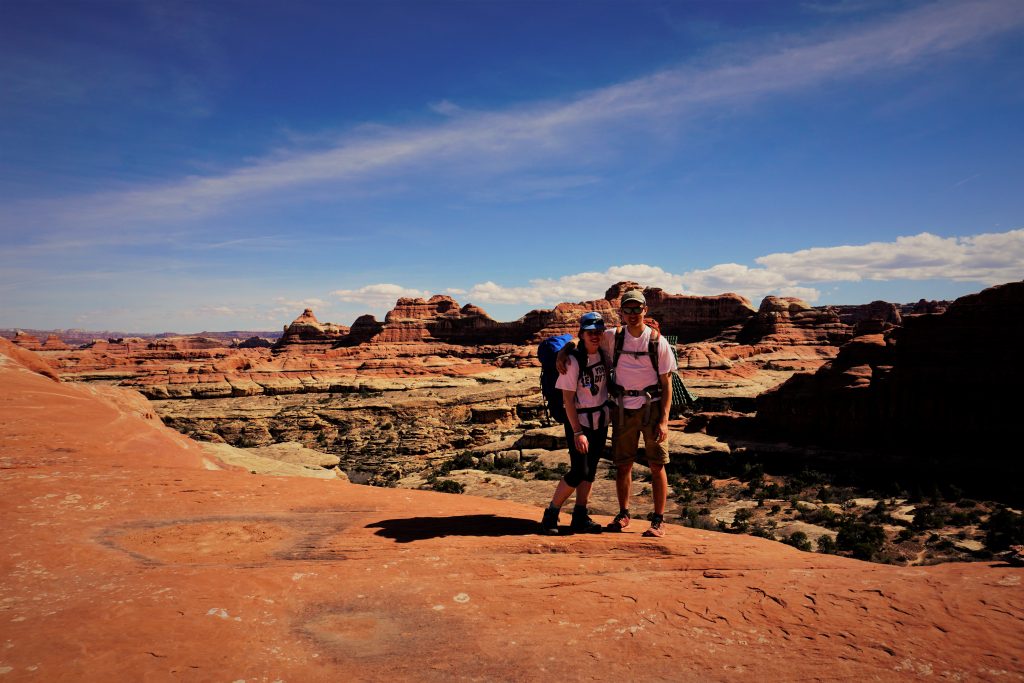 A Week in the Desert Southwest

For even the moderately adventurous Gonzaga student, a spring break trip to Moab, Utah, is a classic experience. Since we had cars this year, Kylie and I decided to also plan a trip in the Moab area, rock climbing, hiking, canyoneering, and maybe even mountaineering! We ended up having such a fun, fast-paced, diverse week, certainly the most varied and exciting activities we had ever done in such a short amount of time!

The landscape was so different than anything we were used to. The intricate canyons and rock walls were so beautiful and complex. We did many great little day hikes in Arches National Park and the surrounding Moab area.

During our time in Moab, we camped at the Moonflower Campground, a beautiful little canyon next to the Colorado River! It got pretty cold at night, with the cool air sinking into the deep canyon, but it was plenty warm during the day!

We had so many great experiences on this trip, but here are a few highlights:

Naturally, our first foray into Arches National Park was to summit the highest point in the park… via rappelling. Elephant Butte is both a scrambling/rock climbing adventure and a canyoneering adventure. The route follows a fun paper topo through narrow slots and notches and down over huge cliffs.

There was one section of low fifth slab climbing, but other than than it was mostly just walking on slabs. Winding through the canyons, it felt like an adult version of a maze or amusement park!

The La Sal Mountains are broad, high mountains that stand nearly 7000 ft above Moab just to the northeast. With a warm dry winter, we were able to drive Kylie’s Camry all the way to almost 9000 ft! We brought snowshoes and ice axes and started heading towards Mt. Tukhinikivatz, a peak mostly famous for its inclusion in the 50 Classic Ski Descents of North America. But Kylie was still working on skiing with me, so snowshoes were the choice of the day!

The snow was quite post-holy in the warm weather, so we decided just to get to the top of Little Tuk, a 12,000 ft subsummit. There was no one else out here except for a few backcountry skiers! They definitely gave us weird looks. They probably thought we were crazy extreme snowshoers.

The summit views were impressive, staring down more than a vertical mile to the red rock and canyons of Moab. I still have not gotten used to these desert ranges, where the mountains drop off into nothing. We could even see faintly the distant San Juan Mountains in southern Colorado!

We had some fun practicing self arrest and glissading down. A few hours later, we were back in the desert, a completely different landscape and season! Moab is such a cool place!

One of our main focuses coming to Moab was to work on trad climbing. I had only done a few trad leads before coming here, so it was nice to start out with some mixed bolted and trad leads at the Ice Cream Parlor.

The rock was so abundant and high quality throughout Moab; there are thousands of routes near town. Gear placements were generally straightforward with cams in the uniform cracks. The only problem was that neither of us knew how to crack climb! This led to me laybacking 50 ft straight up a 5.8 handcrack one time, fumbling to get gear in. I got destroyed by more than a few routes, but it was a great learning experience and by the end of the trip, I could trust a fist jam in a constriction.

On our last day in Arches, we got on Owl Rock, an iconic desert tower. The route is a full 30m of 5.8, but climbed more like a sport climb than a crack climb, so I managed to lead it. There were some intimidating bulges and steep sections, but I trusted my gear and sent it! Kylie had no trouble following, the talented climber she is.

We knew that Canyonlands was the place to go backpacking and we managed to secure a one night backcountry reservation at Chesler Park, so we planned a two day backpacking trip around that. Canyonlands is more than an hour south of Moab, but a worthwhile trip because it is much less crowded and has beautiful trails. Plus, it is right next to Indian Creek, the world famous crack climbing destination.

On the 16 hour drive down to Moab, Kylie mapped out an awesome loop backpacking trip for us that covered much of The Needles District of Canyonlands. This is the most accessible part of the Park, but it is still definitely not crowded.

The trails were very cool. Large sections were on slickrock, so they were marked by cairns every once in a while. There were even ladders to get down a few steep sections where legit slab climbing would have been unavoidable otherwise.

Although we were pressed for time, we dropped our packs at one point and made the 2 mile out and back trek to see Druid Arch, the largest arch in the park. It was huge and magnificent and we had the entire spot to ourselves, in great contrast with the arches of Arches National Park!

We arrived at Chesler Park just before sundown. There are probably five reservation spots for Chesler Park and all were supposedly taken, yet we were completely alone in this beautiful spot. Sometimes I wonder if reservations are ignored more frequently than actually honored… Alas.

It was so nice out that we decided to forgo the tent we had carried along and just cowboy camp out amongst the stars. The sunset was brilliant. All the red rock became pink and orange. The landscape was so foreign, like a Dr. Suess picture book.

The next morning had an equally beautiful sunrise.

Kylie’s route took us on the Joint Trail, a narrow slot canyon. It miraculously connects larger sections of the park. In some spots, it was so narrow that we had to take our sleeping pads off of our packs!

Our backpacking trip ended midday and we began the first half of the long 16 hour drive back to Spokane. Canyonlands was a super relaxing and beautiful way to end the trip after so many adrenaline filled, adventure-packed days!

We crammed more into this week in Moab than we ever could have dreamed. It was definitely the most fun week of my life. We came so far as climbers, hikers, and mountaineers in such a short time period. But more importantly, we grew as partnership. This was our first time being together completely for an entire week, and we somehow never got tired of each other! Thank you, Kylie, for wonderful memories and the best Spring Break a guy like me could ever hope for.