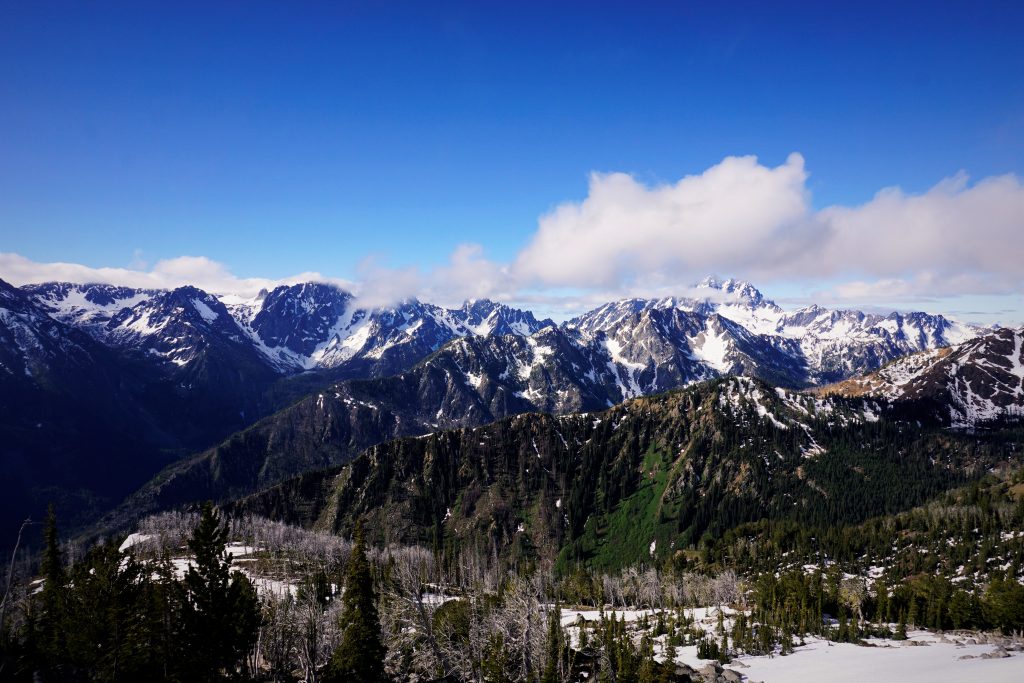 Ashes and Ashes, Don’t Fall Down

I had a dinner engagement, so I called up Logan for a little speed climb of Mt. Cashmere over near the Enchantments. Once again, weather was bad closer by so we opted to drive a little further. We got an early start so I could be back by dinner, starting from the car at first light up the Eightmile Trail briefly. Since we were trying to go fast, we decided to try the much shorter and more direct SE Route instead of the standard route via the West Ridge.

Not very far up the trail, we diverted into the bushes on an old logging road. It was a little schwacky, so we decided to start going up the hillside into the burn zone. The next thousand feet was tough, booting up through ashen hillside and deadfall. I am not sure when the fire here burned, but it was probably less than 10 years ago since not much more than shrubs had grown back since. There were, however, some pretty flowers growing from the ashes, beauty in the wake of death. The circle of life.

Above the burnt zone, the steepness of the terrain eased back and we began hiking cross-country up and left towards the SE gullies of Cashmere. This was a very pleasant section with a different angle on the Enchantments.

We eventually reached a snowfield heading up to the gullies. The snow was still firm from a cold night so I donned crampons on my trail runners, but Logan wanted to put his grippy trail runners to the test.

Above the snowfield, the gullies were in a thick fog. We were hoping the sun would burn it off, but unfortunately, it did not. So we scrambled up the obvious line of weakness through the fog. It was mostly class 2-3. There were thin ice flows on some of the rocks, quite surprising for early June! At one point, we trended too far left out of the gully, getting into to more difficult terrain but we think we ended back up in the main gully. Alas, it was difficult to tell and difficult to see anything. We got to a high point and checked the GPS; we were on the summit!

We scrambled back down the gullies and reentered the sun when we got to the snowfields. The temperature shot up like 20 degrees and it was back to a nice spring day.

The descent went super fast. We had a great time boot skiing the slick snowfield and later boot skiing / plunge stepping the ashen forest. While the burn zone was definitely the crux of the ascent, it was the speediest part of the descent! We arrived back at the car in the early afternoon, about 8 hours after we had started. Time to go get stuck in Sultan traffic on highway 2!