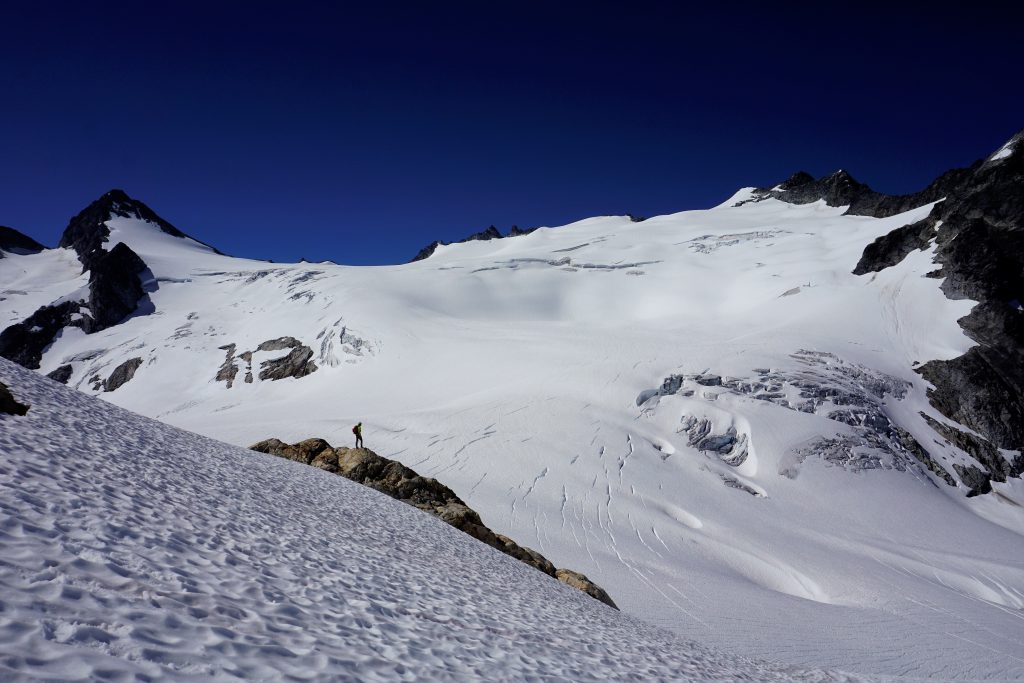 Snowfield Peak is the high point of an imposing massif of peaks that rises 6000 ft above Diablo Lake. Many motorists passing by gaze up at Pyramid and Colonial Peak, but few lay eyes on Snowfield Peak. The climb is a classic: steep climber’s trail, multiple glacier crossings, and some fun scrambling. As a day trip, it packs the incredible diversity of terrain that makes the North Cascades so unique!

Another early wake up got Daniel, Logan, and I to the trailhead somewhere around 5 or 6 in the morning, just as it was getting light out. The first few miles of trail to Pyramid Lake is possibly one of the worst hikes ever in a National Park. It is super rocky, has not much of interest, and ends at a marshy little pond. But this was not our end goal, so we began up the steep climber’s trail, often pulling on branches to get up the steep hillside.

After gaining the main ridge, we had some hilarious little class 3 rock steps intermixed with steep moss. Finally, we broke out into the open beneath Colonial and Pyramid. It was a wonderful day!

We traversed on the snowfield above the magnificent waterfall cascading down the granite slabs. Everything was lush; shades of green, grey, and white dominated the landscape against the blue sky.

The Colonial Glacier has seen lots of recession lately and has left a big glacial lake at its base. It was completely frozen over except for the edges but detached, so we jumped onto the iceberg and walked across it. It was wild!

A short little snow climb brought us up to the Colonial/Neve Col, where we took a break. It was only windy here, but there were wind shelters for a few campsites. Continuing on, we got our first view of the massive Neve Glacier.

We brought a super light glacier kit, so put on our diaper harnesses and roped up. There were not too many crevasses showing. The crossing was pretty long and beautiful, but quickly we were on the scramble. Some people talked about complex route finding on the scramble, but we just followed our noses and made it up without too much 4th or 5th class.

The summit was very nice, centered among many giant North Cascade peaks.

We had a joy running back across the Neve Glacier while still roped up. It was probably quite a sight to see. Somewhere along the way, I lost a picket off my pack but was able to find it quickly when going back.

Down the Colonial, we pulled off a 5 minute mile or so according to Daniel’s phone as we sprinted, leaped, and boot skied down the perfect snow slope. It was one of my fastest moments on foot in the alpine. Back at the frozen Colonial glacial recession lake, the wind was so strong that the massive waterfall above the lake was not even touching the ground. It was simply magical.

The steep climber’s trail went quickly and we jogged back down the rocky Pyramid Lake trail, passing many families out for a nice little day hike. Hopefully they were not too disappointed by the hike. We got back to the car almost exactly 12 hours after leaving.

Overall, I think this is one of my favorite “day trips” in the Cascades (being much more reasonable as a day trip than Glacier Peak)! It travels through distinct forested, sub-alpine, and alpine zones. We only saw a few other people all day and got more than our fair share of enchanting waterfalls, frozen glaciers, and mighty peaks.